At the start of the new year, we like to take a moment and look back on the work we’ve published.  This new year’s special draws from that process and from another print tradition.

In the 19th century, it was common practice for newspapers to publish a special end-of-year note (often in verse) written in the “voice” of their news carrier. These “Carrier’s Addresses” were a beautiful seasonal memento, a request from the carrier for tips for their services, and a reminder to readers that there’s a human presence behind all those weeklies and dailies offering news and entertainment for the past year.

At Broadsided, we first embraced the idea of the Carrier’s Address in 2010, when we combined the concept of a year’s review with the seasonality of haiku, publishing a collage of brief verse (some from the editors, some by contest-selected submissions). The HYIR (Haiku Year-in-Review) ran from 2010 – 2020.

Now, we offer you three 2023 Carrier’s Address Centos. Aa cento is a poem wholly made of passages taken from others’ work.  Here, we’ve used lines from poems we’ve published in each month of 2022 to make three different poems.

Seek the original poems in these lines.  Create your own.  Want to tip your carrier? Consider donating.

Even $5 helps pay for web hosting and postcards. Of course, if you can give $50, $500 or even $5,000, we welcome your support. Donate now through the Broadsided Press Give Lively donation page.

Broadsided Press is classified as a public charity with tax-exempt status under Internal Revenue Code Section 501(c)(3). By donating to Broadsided Press you are making a charitable contribution tax-deductible to the extent permitted by law. Broadsided Press EIN: 87-3187430

Toward a Finish Line

Less & less & less. The memory is a jagged rock

past  or present    clenched shut. It stays with me like a cairn.

I’m living in the woods these days, hearing strange noises.

All I have is me again         without words, fragile ecology, eyes

of water, body that  rhizome, half grub, I was born tangled

to haunt the block in an evening storm. A fantastic

back when everyone was still alive.

We have returned here
we are home

if each tube snakes its way out the window, then where does memory go?
somewhere into the cold, winter air, picked up by a breeze, & what is a breeze but a circle?
the memory is a jagged rock that fell from this breeze, a rock a person picks up off the lawn then gives to to the next person…

Years ago, we ran away from here in the bruise-blue night, as far and as fast as we could flee
can you see
my body
here in the underworld like a dream

I still keep your secrets. Your secrects are safe

I woke up hoping for ordinary, looking for a fight,
but I tangled with mystery instead.

I would like to know what the trees know.
where does memory go?

Why am I so small? What did I do to get
this little life

Cento at the end of a difficult year

But i like it better than what happened next:
I woke up hoping for ordinary, looking for a fight.
So burn sage burn cedar
particles of my skin, pollen dropped from trees.

I flip a milk crate to sit on, gingerly open

All I have is me again–
an elephant-shaped teapot from the thrift store.
I was the last gulp from the communion cup.

Now, just when I think I can’t hear them
He de callarme como las piedras
There’s a kid talking to lights, dim,
𐒰͘𐓤𐓘𐓧𐓣 𐓬𐓟, 𐓟𐓤𐓣 𐓘͘𐓤𐓪͘𐓵𐓘 𐓘𐓲𐓤𐓯𐓟
was her heart was her heart

I said WHAT ARE STARS?
What is a breeze but a circle?
I try to Google but have no bars. 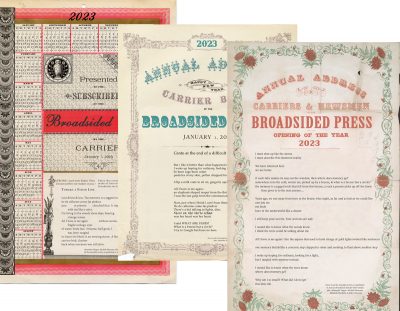