Heid Edrich, Ojibwe poet, writer, and filmmaker, leads a revolutionary rallying cry with the curation of “(About that) Water is Life,” an exhibit at the Minnesota Center for Book Arts. She brought the collaborations from the Broadsided Press NoDAPL Responses feature to the exhibit. The exhibit ran from June 9th – August 13th and featured a collection of visual art and published writing from Indigenous artist, poets, filmmakers, and collaborators—all created out of the Water Protector actions at Standing Rock.

“Water is Life” centers on Indigenous resistance, specifically the NoDAPL movement, which fights violations of water rights and pollution that results from the North Dakota Access Pipeline.  The movement has extended to many more pipeline projects planned throughout the U.S.

This show features art that lived and grew out of Water Protectors’ actions. Heid had been part of a group which supported the school at the Standing Rock camp and had also promoted writers who helped work on a ‘zine with the kids who were there.

For the show, Heid asked to print the broadsides in quantity, which overjoyed us at Broadsided Press. She also wanted to be able to give broadsides away, so she worked with the gallery director to display them in a way that invited people to take copies. Over 100 copies were picked up and left the building in new, curious hands!

Heid says “the Native women in the arts in Minnesota [are] some of the most dynamic people I’ve ever met […] their personal integrity challenges me to be my best.”

Hillary Kempenich (work pictured above) is an award-winning artist and member of the Turtle Mountain Band of Chippewa and also a studio artist and advocate for the arts, social justice, and Native issues.  She painted “Open Secret,” an abstract representation of aftermath, full of pollution and destruction.

“Open Secret” also includes horned gas masks with a streaming, varied background and colors in flowing brushstrokes so vivid they are reminiscent of blood, contamination, or lava. “Public Notices, “Truck Spills,” and “far and wide” are repeated on the masks, which have zoomed-out representations of oil wells and drills in the background.

Jay Dearien’s “Counter-attack of the 50-foot Lakota Woman” (above) is a satirical comic that plays with the title of the famous American movie and also commemorates “Dignity,” a 50-foot statue by Dale Lamphere of an unnamed Lokata woman who represents the courage of Lakota and Dakota culture in South Dakota.

Marlena Myles, a member of the Spirit Lake Dakota Tribe and a graphic designer and artist in St. Paul, MN, worked with the artist Dawi to create a scaled version of the original Tipi Myles designed for Standing Rock (above).

Elizabeth LaPensée, award-winning writer, designer, and comic/animation artist created a ghost-like representation of mourning and commemoration of water, the indigenous symbol of liquid life force and blood: “singing to help the waters remember herself as she was.”

Curating, writes Heid, “is always a wild ride [,] collecting work [….] it’s a strange disconnect when you can’t be there to see everyone interact with it. But the gallery folk said they had a wonderful response.”

Heid Erdrich is author of the collaboration “Lexicongraphy 1”, translated by Margaret Nooriand with art by Meghan Keane.  Erdrich’s writing has won awards and honors from the Loft Literary Center, Bush Foundation, Minnesota State Arts Board, The First Peoples Fund and other organizations.  She teaches writing and is a frequent speaker on Native American literature, visual art, and Indigenous foods among other subjects. She lives in Minnesota. 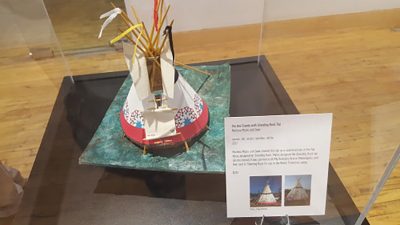