When I first read Michael Wasson’s new collection, Swallowed Light, I kept looking at a photo of an X-ray of my hand. Sandwiched between an image of a snowy landscape and another of six children on a red couch, my hand’s 27 bones were lit by atoms bouncing off a metal plate, creating a ghostly image of what I cannot see from here. This is the way I understand bones.

But, to read Wasson, I needed to understand them differently: many of Wasson’s exquisite poems hold the bones of his ancestors, which hold a different weight, reflect a different energy. Wasson, who is nimíipuu from the Nez Perce Reservation in Lenore, Idaho, writes about the people and the land shattered by colonialism.  That is: the fractures that separated children from their parents, severed the living from their lives, and scattered the bones of ancestors far from their communities.

I held his book in my hand, the same hand that I’d seen in the X-ray, and thought about bones. The same hand touched the bones of my own beloved dead, turned to ash and safely returned to the sea. The bones in Wasson’s collection have not been allowed to experience such care. His poem “Self-Portrait as Collected Bones [Rejoice, Rejoice]” contains a note at the beginning: “after Paris auction of indigenous human remains & objects.” In another, “The Bones of Us,” individual bones have gone missing:

bones have disappeared from you. […]

How could I, a white writer, begin to approach these vanished bones and these poems? How could I hold them carefully enough? Should I be looking at them at all?

At first, I couldn’t. I could only look at the X-ray. I flipped past it to the photo of the children, now in elementary school and junior high. Their soft bones have hardened, fused, grown long and lanky. But something about the idea of beginning with the bones I know seemed better than leaving these bones unseen. I wrote down some of Wasson’s poems by hand and set the words against my own bones; I took others and lay them on top of the bodies that are most precious to me, those which I most fear losing.

Wasson’s poems hold stories of what has already been lost. Indigenous language and land. Family histories. People. But these poems also carry the supportive quality of bone in their very structure. In “A Boy & His Mother Play Dead at Dawn,” the lines themselves began to seem to hum with something that wanted to be exhumed: the short, zippered lines here appear like vertebrae that could be crushed—yet, they are strong enough for a person to stand and hold their head high.

These poems ask questions of embodiment, of longing and belonging—to community, to ancestors, to the home that can be found in another’s body and the home that can be found in one’s own. I wanted to learn how to feel these poems more deeply—to take in the lines, to swallow them, to live with them inside. But I wasn’t sure I could or, really, should. How can we connect to experiences that don’t belong to us?

It’s a question that I’ve often wondered about, one that no one poem can answer—or, perhaps, should. These poems have other work to do. They speak of bones not only as reminders of death but also as the framework of the body and the life it holds. And along with the darkness of centuries of colonialism, they shine with an inner light that reveals something supportive and strong. They are at once like an X-ray, revealing the unseen beneath the skin, and something more powerful, illuminated from within.

Sometimes the light comes from the words and phrases Wasson chooses, sometimes it’s written into the poem itself. And  sometimes, it can be found in both. “A Poem for the háawtnin’ & héwlekipx [the Holy Ghost of You, the Space & Thin Air]” opens with a brief phrase in nimipuutímt:

but its bright skeleton & autumn-

into butterfly wings
+++on a mapped earth.

The eyes, the butterfly wings, the autumn-blown skin feel as if they are part of a great, knowing body that takes comfort and joy in the earth. In the final poem of the collection, “You Are There, Almost, without a Name, without a Body, Go Now,” the speakers of the poem seem to pull together the strengths and secrets that have been carried through the years. Even though the person being addressed in this poem has no name, has no body, by the closing lines, they have been ushered with sweetness into a new belonging:

& tell me every story
about the directions

you found in your
own lungs—about

breathing to find
your way home.

The poem suggests that by looking deeper into one’s own body and following it as a guide, even in darkness there will be a light that shines us toward the place we belong. Perhaps nothing can ever make me understand what another person’s experience is in my own body, but maybe poetry can help us peer into what we can’t see, can illuminate what’s been broken. Together, Wasson’s poems seem to suggest the ephemeral moment in the healing process of a bone—when the body deposits so many minerals at the broken place that, for a moment, the bone is stronger than it was before.

“Close to Each Other With [a / the] Body” / “paq’qatát cilakátk,” words by Michael Wasson and art by Amy Meissner, published in November 1, 2016.

Bsided: The visual structure of your Broadsided poem “Close to Each Other With [a / the] Body” / “paq’qatát cilakátk,” was really striking to me, particularly in thinking about bodies and the structure of bodies. The alternating lines on each side made me think a little bit of a rib cage and how the bones come toward the center to protect the heart and lungs. Do you think a lot about the form your poems take on the page, and at what point in your writing process does this shape emerge?

MW: When writing that poem years back, I was often considering the relationship between how a breath holds language and how language breaks from us. I often read poems back to myself to see where fracture has an opportunity for surprise—almost in a way to teach me something about the language that the poem carries. I love so much that you started to see the contours of something calcified—these panes of language to look toward an inner landscape of a body—, because reading this poem is a very stilted experience. The nimipuutímt came first, and I was looking at where morphemes could snap at some more natural partitions in order to expose a multiplicity of meanings between a body alive and a body lost.

The way these forms take shape is really hard to pin down. Sometimes, I start with long lines and the shaping comes only from reading aloud. Other times, I scatter lines at the start, and these end up needing order, structure, and a way to hold onto each other, so I might turn toward the couplet. How my breath holds, how the thematic energy feels, and how the line breaks crave some modicum of refraction all sort of funnel into how a poem finds its vessel. At least for me.

MW: I put the body first because the book helped me to navigate the physical realities between history and the loss / recovery of a language that is so much a part of who I and my people are. In thinking this over now, these many years later, I feel that the process is putting so much of what rubble we’ve collected of a prolonged hurt into a necessary stillness—the page. During the time when most of these poems were written, I remember having these ideas while on walks or after running just after sundown, but the language and imagery would take clearer forms while staring at ceilings, upward, or at my blank white wall or out a window near my bed. There was something about keeping the body in this rhythm and then slowing it down that worked to write what this book eventually became.

Bsided: I’m really interested in the languages of your poems and also how they relate to the languages surrounding you where you are now in Japan. At first I looked up words I didn’t know and translated them, but then I thought maybe it would be better to simply try to experience the language. And I’m wondering if that’s somehow related to the body and how we experience it as well. The inner workings of our own bodies can be so mysterious, even though we live in them every day—and understanding another person’s experience in their body can be so challenging. This made me wonder, are there connections between the languages you use and how you see the body?

MW: Great question, really. Language has always been this body-bound exchange between a world and a self—and I struggle in that dynamic a lot. One of the reasons I will let a shard of nimipuutímt appear in poems is that is the reality I deal with—being a language in fragments. If I could be every bone and blossom of this language, I would. But I also accept that I cannot hold every word or history between my lips. There, too, lies this relationship of being American where I can cross our dominant English with the land, language, and people I come from, and that is how I finally found an avenue forward. That I, and all my dead beside me, am this, in this country of conquest. This is what was taken. At the center, between all of it, is the indigenous body, now, before, or ever.

Cameron Walker is a writer in California. 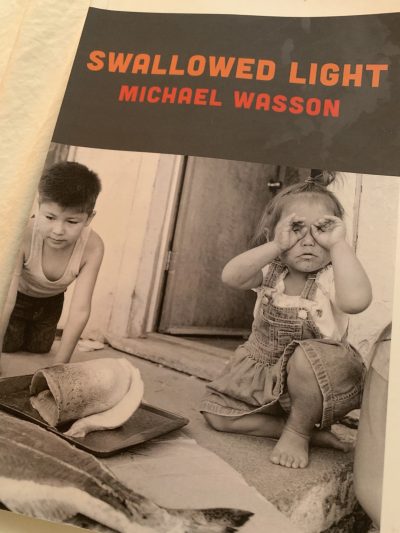