Art activist Louis Buchhold uses his body to express himself. With already around 75% of his body covered in artwork, he decided to tattoo an addition onto his leg: a collaboration by Broadsided Press artist Cheryl Gross and poet Nicelle Davis.

This grew from a little seed planted at Broadsided Press and has become a creative and “vectorizing” performance.

Gross and Davis met through their Broadsided collaboration “Composition 101” and then went on to do several video poems together as well as a book, In the Circus of You (Rose Metal Press, 2015). A film animating one of the book’s poems traveled the world’s video poetry festival circuit and won the Ó Bhéal Poetry Film Competition in 2015.

Louis saw the illustration of a sword-swallower alongside the book’s poem “I Found My Own, I Must Have Eaten It Without Knowing.” He asked Cheryl to adapt the artwork into something that could be tattooed onto his leg and then decided to have the the entire poem tattooed as well.

Louis, in cartoon form, takes the audience through the process, beginning with a text from Cheryl, who excitedly writes: “YOU HAVE TO VIDEOTAPE THE MAKING OF THE TATT!” We are then transported into the consultation between Louis and tattoo artist John Schneider from Marginalized Tattoo on Melrose Avenue as they plan where exactly the text and image will land.

The second poem that Louis has tattooed on his right leg, “Place—a Pastoral of Amplified Flesh,” was written by Nicelle Davis for Louis. Nicelle had been moved by Louis’ story—during the AIDS crisis, he was told he had six months left to live and decided to be a part of biological study of HIV/AIDs to hopefully save another’s life in the future.

The dehumanization that Louis experienced during the medical procedures—he told them to stop because of the pain and they ignored him—parallels, for Nicelle, the experience that women face when they say “no” and “stop” during a sexual encounter. It mirrors any violent relationship or situation where “stop” should mean stop but is ignored, or, worse—is interpreted as “more.” Nicelle made it her mission to capture this in her poem.

“Place—a Pastoral of Amplified Flesh” blossomed into a collaboration with Cheryl and then eventually a performance at Boston Court Theatre in Pasadena titled “The Body / The Body Is Not.”  The poem is shared below:

Intersections of rivers and roads—fibrous–
vein and vessels spread beneath us–
as though we’re candles passing over
or hands plunging under
the unattainably of location. A map
is made by omitting–
territory synonymous with unsayable
events. Let me rephrase:
I knew a woman who burned finger sized
scars in her arms with erasers–
marking how she was pinned to an orchard–
the taking of all her fruit.
I knew a man who housed a virus—science
cut doors to his spinal cord.
He welcomed doctors into the parlor of his
back, but they came for his kitchen.
Hands inside another. This man, woman,
were conscious at entry.
When they said, this hurts. No one stopped
the hurting.
A light passes over—How many hands
before a stopping place?

Nicelle Davis performing “The Body/ The Body Is Not.”

In the performance, the body is described as a vessel, a route full of “intersections of rivers and roads,” an “unattainable” marker, border, territory. The body is also described as an entry and house for pain and violence.

This tattoo collaboration emphasizes the function of the body, how it can be used as a vehicle for art, but also, more negatively, a vessel easily inciting violation or “a sword swallower/ with [its] hand half- / down [its] throat […]”, or, as Nicelle finally calls it, “a stopping place.”

We are grateful to these artists for their bold work. 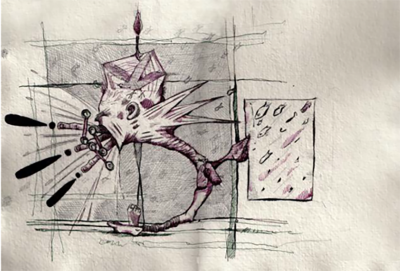