We’re thrilled to announce that the 2021 issue of Provincetown Arts magazine (https://provincetownarts.org) features, as its poetry section, a folio of work past and future from Broadsided Press as well as a profile of Broadsided by Gemma Leghorn.

Provincetown Arts was first published in 1985 and, since then, has annually released a large glossy magazine spotlighting writers and artists with strong ties to Provincetown, Massachusetts, which for over a century has had been an artists’ colony.  It’s a place that’s a hub and nexus for curious and creative folks from the US and abroad–whether they live hear year-round, visit annually, or had a formative moment at a formal or informal artist gathering/residency (there have been and are many!).

In early 2022, Provincetown Arts Press, which has published books since its inception and is now turning to amplify that part of its work, will publish an anthology of Broadsided Press’s first 15 years of publication.  We hope you’re as excited as we are for this in-the-hand offering of what’s been given free, online, since 2005.  Of course we’ll be sharing more news as the time approaches.

Now, below, we offer a few pages from the magazine’s feature and folio of broadsides.  For the folio, Elizabeth Bradfield, Sean Hill, Miller Oberman, Jennifer Perrine, and Alexandra Teague each selected two broadsides from our publications, past and future and wrote a brief note about their choices. As Alexandra Teague writes, “I’m often fascinated by the tensions between eternal, unseen states in poems and what the art brings to sight.”  We all reach toward poems and art with different histories and visions, and we hope that, as we reach, these works find you.

If you’d like to enjoy the current magazine in the hand, you can order it here (no!  there’s not an online version!).

We are honored, overjoyed, and thankful to the editors, board, and designers of Provincetown Arts who have so joyously and enthusiastically moved Broadsided from our happy digital home into one of lasting print and perfect binding.  It’s a thrill to be in both worlds.  Stay tuned for more! 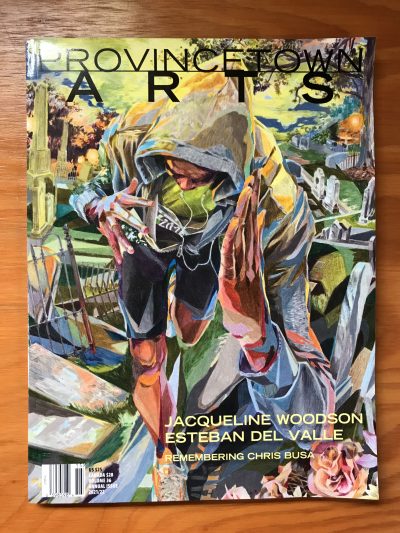