Two pieces of art by Cape artists were selected by James Stanley, the Visual Arts Coordinator for the Fine Arts Work Center, from an open call. Then we posted the images and asked Cape Cod poets to respond with words.

The first pieces below (“Poseurs” and “Cusp”) are the two winning collaborations. They will be joined by pieces from the Cultural Center of Cape Cod’s annual Mutual Muses project and Broadsided Press to “ride” the buses of Cape Cod for the 2014 summer season.

Links below the Broadsided Press collaborations will take you to their original publications that you can download and print for yourself!

ANTICIPATED QUESTIONS:
• Why are there different shapes? Because the Cape Cod RTA has two different types of buses with different spaces available.
• What route will each collaboration be on? Ride and find out. The buses change routes, so riders should see a range of broadsides over the course of their trips.
• Will you do it again? We hope so! Check back in the fall. ABOUT THE CAPE COD ARTISTS AND POETS

POSEURS
Jane Fay Baker grew up in Falmouth. She received her BS in Fine Arts from Smith College and her MSAE in Printmaking and Art Education from Mass College of Art. Mrs. Baker sold her first woodcut in 1991 at the age of 21 at the Woods Hole Community Art Show and has been showing her work at that show as well as numerous other places on the Cape ever since. She is a member of the Printmakers of Cape Cod, the Artists’ Association of Nantucket and the Handworks Cooperative Art Gallery in Woods Hole.
Poet Judith Askew loves polishing language and making up words. She writes about everydailinesses and is the author of Here at the Edge of the Sea, a collection of poems and photographs. She is a member of Steeple Street Poets and teaches writing at Cape Cod Community College.

CUSP
James Broussard: An artist living in Provincetown, Jim Broussard paints en plein air. His work can be seen at Chach (73 Shankpainter Rd.). Raised in Montvale, New Jersey, Jim has been painting for more than thirty years. Of his work he says: “Walks through the dunes of the National Seashore or Cape Cod’s seaside neighborhoods are my inspiration. To evoke a feeling or make a connection through my work is less an exercise in intellect than an experience which invites the viewer to pause.”
Poet Melanie Braverman is the author a novel, East Justice, and the poetry collection Red, winner of the Publishers Triangle Audre Lorde Poetry Award. Her writing has appeared in The New York Times Sunday Magazine, Poetry, American Poetry Review, and other journals; visual work is currently in exhibitions at the Leslie+Lohman Museum in New York and the Provincetown Art Association and Museum.

BENEATH RIPPLES
Artist Muriel Thomas is a graduate of the Rhode Island School of Design with a BS in Art Education and a Master’s Degree from Boston College. She has retired from teaching, moved to the Cape and become focused on the natural beauty of the Cape as well as painting and photography. She is involved with several arts and photography groups on the Cape.
Poet Jack Harrison taught English at Dennis-Yarmouth Regional H.S. for 35 years. Currently he spends most of his time riding a road bike and dreaming about going faster and faster.

SAVING BRIGHTON BEACH
Artist Richard Neal works at Chalkboard Studio in Barnstable, Massachusetts. He earned his Bachelor of Fine Arts from the University of Massachusetts at Dartmouth and his Master of Fine Arts degree from the Cranbrook Academy of Art in Michigan. His work was recently featured in Sock Monkey in Chelsea, NYC; at NKG Gallery in Boston; at the Dadian Gallery in Washington, DC; and at the Tao Water Gallery in Provincetown, MA. His art will be included in Debbie Forman’s Contemporary Cape Cod Artists: People and Places, due out later this year.
Susan Berlin‘s poems have been widely published, appearing in Alaska Quarterly Review, Georgetown Review, Harvard Review, and Ploughshares, among many others. Twice a finalist for the National Poetry Series, recently she was awarded First Prize by the Rhode Island Arts Council in the Galway Kinnell Poetry Contest. She lives in Yarmouth Port, MA.

SURFACING
Artist Jackie Reeves (MFA, Massart) was born in Montreal, Canada. She has lived on Cape Cape since 1995 and works at Chalkboard Studio in Barnstable Village, MA. Jackie has exhibited in museums and galleries nation wide and has been featured in numerous art publications.
Poet Betty Ann Lauria is a teacher who has lived in Yarmouth for the past 20 years and has been teaching at Dennis-Yarmouth schools and writing with the Bass River Revisionists ever since. Her work has appeared in Cape Woman Magazine and an anthology, World of Water, World of Sand.

COMMUNION
Artist Susan Fehlinger moved to Cape Cod in 2003 after a career as a television producer in New York. Since then, she has able to dedicate her life to pursuing her love of art. www.susanfehlinger.com
Poet J. Lorraine Brown is the recipient of a Massachusetts Professional Development Grant. U.S. Poet Laureate Ted Kooser selected one of her poems for his nationwide newspaper column. Her chapbook, Skating on Bones, was selected as a “Must-Read” Book of Poetry by the MassBook Awards Committee. Her poem, “Communion,” was included in her chapbook, Dancing in the Crystal Palace (Finishing Line Press, 2013).EVANESCENCE
David M. Cravenho is an artist currently working on Cape Cod whose work appears in permanent collections around the world. He has taught at the University of Georgia in Cortona, Italy and at Massachusetts College of Art where he received a Masters of Science in Art Education. He received a Masters of Fine Arts from Rochester Institute of Technology’s School of American Craftsmen. He has had Artist-in-Residencies at the Archie Bray Foundation, Banff Centre School of Fine Arts, and Watershed Center for Ceramic Arts, among many others.
Poet Barry Hellman is a clinical psychologist who organizes and hosts poetry and music events, publishes the Cape Cod Poetry Group on Facebook, and leads poetry workshops. His poems have appeared in literary journals, anthologies, broadsides, and a chapbook, The King Of Newark from Finishing Line Press. “Evanescence” is forthcoming in the Cape Cod Poetry Review, Winter/Spring, 2014.

SILVER NEEDLES
Rosalie Nadeau: A master painter and inspired teacher, Nadeau balances powerful color and generous texture with classical form. Her paintings are published and in CCMA’s permanent collection. Her pastels earned signature memberships. She shows at Left Bank in Wellfleet and at Trees Place in Orleans.
Poet Donna O’Connell-Gilmore lives in Orleans and is a member of the Outer Cape Line Breakers and The Narrow Land Poets. She is a regular at open mics on the cape. Donna is a former newspaper columnist writing about birds, and nature is a prevailing force in her poetry.

OCEAN STATE
Jason Eldredge: Largely self-taught, Cotuit-based painter Jason Eldredge is a plein-air painter of a more urban variety. While he’s not adverse to Cape Cod’s natural resources of beauty, painting it often, Eldredge thrives on the thrum of the city, painting directly on the streets of Boston and New York.
Gregory Hischak is a South Yarmouth playwright, poet and performer. He frequently rides the H2O, sits in the back, pretends not to be listening.

LANDSCAPE
Deb Greenwood teaches art at the Cape Cod Lighthouse Charter School in Orleans, is the Art Director of the Cape Cod Sea Camps, and is Education Coordinator for the Cahoon Museum of Art in Cotuit. Her work has received awards from the Cape Cod Art Association and the Arts Foundation of Cape Cod. She lives in Brewster.
Poet Marjorie Block, a retired English and Creative Writing Teacher, is a member of the Outer Cape Line Breakers and The Narrow Land Poets. Her poems have appeared in literary journals and anthologies. She won 1st place in the Prime Time Cape Cod 2011 Writing Contest. Recently she published her first book, Where One Thing Becomes Another, a collection of her poems along with photographs by Allan Cole. 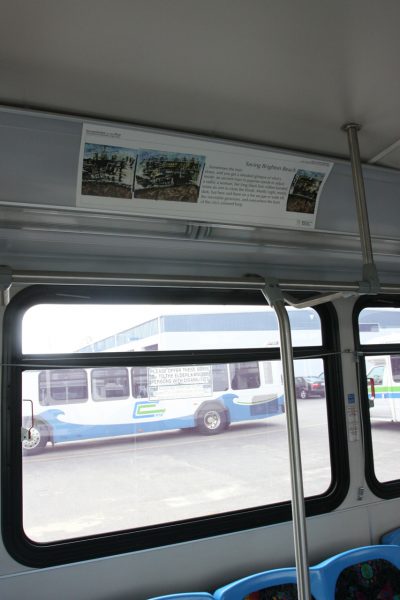