For our 3rd-annual collaboration between the Moscow Arts Commission and Broadsided Press, we featured selected work by national poets who are members of the Association for the Study of Literature and the Environment (ASLE)—which is holding its national convention in Moscow the week of June 22nd—in conversation with juried work by local visual artists. This year’s project also features a special-edition broadside of Moscow’s newly elected Poet Laureate, Tiffany Midge, with art by local artist Ryan Law. From June 9th-23rd, broadsides of visual art and poetry by local and national artists were on the buses and in the Transit Center of Moscow, Idaho. Eight local visual artists and poets were featured: George Wray’s “The Swimmer” with Ron McFarland’s “The Lover of Lakes”; Nelson Duran’s “Love Elida” with David Thacker’s “Sleeping Late in a Duplex in Moscow, Idaho”; Lynne Haagensen’s “Moving On” with Warren Bromley-Vogel’s “Poem”; and Valerie Boydo’s “Coyote Dreams” with Alexandra Teague’s “Coyotes.”

Our first foray into public transit took place in Moscow, Idaho in the summer of 2013. There were “trading cards” for riders to take as well as broadsides on the buses—the kickoff party included poetry readings at the bus stops.

Moscow, Idaho is home of Broadsided editor Alexandra Teague. In 2012, she and artist Stacy Isenbarger created the B-sided DIY with their students at the University of Idaho. These collaborations were featured on the buses, too. 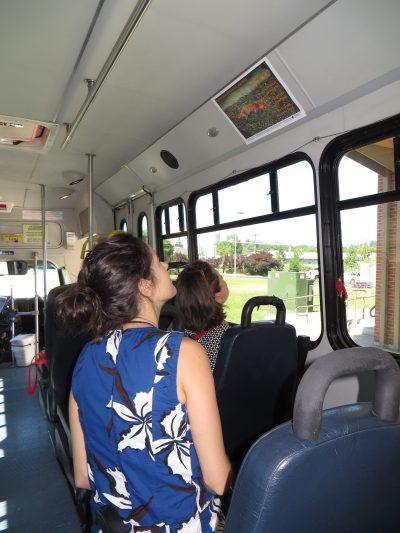