A young dancer in frosty quietude “glide[s]” across Chloe Honum’s debut collection, The Tulip-Flame, which revisits the deaths of her mother and best friend and the loss of love. Honum’s experience and memory as a budding ballet dancer traverses the book as inspiration and trope, crafting the entire collection into a meticulous choreography.

I once heard that a great ballerina does not make a sound when her feet touch the stage. When I asked my dancer friend if this was true, she said, “I guess you strive for that. It’s like you voluntarily try to smother yourself. The more suffocated you feel, the more elegant it would look on stage.” After her three-hour practice, she limped on our way home. While I don’t mean to suggest that Honum limps in these poems, the idea that apparent effortlessness often arises from serious rigor holds true.

Crafted in mostly spare, short lines, The Tulip-Flame is elegant, releasing physical and emotional pains in subtle, calculated breaths. The resulting dance moves on the page are thus exquisite. At the same time, the holding of breath between Honum’s lines make the moves even more captivating. Honum’s restraint is self-aware and honest, pulling the reader toward the speaker’s constrained expression behind each sophisticated move.

Ballet poems punctuate each of the four sections of The Tulip-Flame, threading them and working as an anchoring sensibility. Even the lines not directly about ballet are positioned as if each is subtly choreographed: “In the car, we sat a long time, / the keys a silver / starfish in her lap, silence // a kind of love between us.” Congealed quietness, rather than a spontaneous burst of muscular energy, governs the book, even in a dramatic grand jeté after the mother’s suicide attempt: “Mother tried to take her life. / The icicles thawed.” Honum moves through her poems, deft and noiseless, crystalizing unruly pain into soundless imagery—a blood-red tulip encased in morning frost.

Because the airy precision of Honum’s dance is counterbalanced by heavy grief, the performance of the poems is not just achingly pretty. The grief, “a wet coat,” wraps and pins the speaker down with soundless weight. In such heavy grief, the tightened tendons in the “ballerina” poems, which voice the poet in her teens, feel all the more desperate, precarious, and determined. Take, for example, “Ballerina in Winter:”

Through this season given to storms, I wake at dawn to practice.
I drag aside the living room chairs, like heavy dreams, and play
softly a tape of ballet music. Sometimes I go outside to work
on grand jetés, to run barefoot and push off from wet concrete
while Mother and Sister sleep.

The speaker’s bare toes must ache upon touching the icy concrete outside, yet we do not hear of this. Rather, what pushes through the reader’s mind is the speaker’s lifted body, momentarily frozen in mid-air, a static grace. Grief will dampen the speaker’s feet again as they make their inevitable landing, though the touch of that moment is concealed from the reader. Throughout The Tulip-Flame, sorrow seeps through the speaker’s skin in various forms: in the dawn “mist [that] widened the space between the trees” on her way to the studio; the “wet grass” outside the hospital where her mother was taken after the suicide attempt; and in the “soggy evergreen” that the speaker gazes at after the mother died as she “plan[ned].”

Because of the restrained, pale-gray tone of poems, it is particularly poignant to witness the “crimson” flares of emotion that are released in the latter half of The Tulip-Flame. In “The Tulip-Flame,” where we first learn that the speaker’s mother finally saw to her “plan” to die, the speaker’s sister lets red tulips blaze from the rainy, “plain pastel” hill of her drawing. The sister’s “strokes” are “elsewhere controlled,” but they let out “one astounding flame” as if to burn the sadness that has shrouded the sisters or to concentrate it in an instant, so that it catches fire and turns to smoke, rather than slowly moistens. While the crimson flame does not dry the rainy field, the release of hardened pain is cathartic for the sisters and readers alike. It is fitting that “Ballerina, Released” follows; here, the speaker dances The Firebird in a red tutu like “a flame / in a cave, then fall[s].” As opposed to the frosty and controlled grand jeté, the speaker as firebird throws herself to be consumed in the “flam[ing]” movements that leave her with “vertigo” and “smoke.” After this fiery release the exhausted, flatly honest speaker states: “I cannot grasp my life. / I float.”

Bsided: When I visited Auckland, New Zealand one summer, I heard that there are supposed to be “four seasons in one day.” It was intriguing to imagine how the elongated flow of time could be concentrated in 24 hours. I wonder how your experiences in California and Auckland, where the traits of seasons and the speed of their changes are very different, might have influenced you in thinking about seasonal changes and the flow of time in your poems.

CH: Oh yes, the weather in Auckland is very colorful and changeable. The rain especially is a real force. There has always been a lot of weather and seasons in my writing. I think I find it grounding to acknowledge what the weather is doing. It’s both separate from and intertwined with whatever is happening in the poem, and to me it’s never without some kind of particular emotional charge or sensibility.

I think the seasons, too, can be grounding, and I like how they carry ideas of change and renewal. While sequencing collections, I tried to pay attention to the different seasons in the poems and how they spoke to one another or marked shifts in time. When I lived in Southern California, and really everywhere else, I missed the Auckland seasons. Perhaps that’s part of why they show up so often in my poems. I did like the weather in SoCal, though, especially the morning fog by the beach.

Bsided: In your interview on “Ballerina, Released,” you say: “Stepping into a tutu, wrapping the ribbons of my pointe shoes around my ankles, I felt transformed. Writing poetry, I have at times experienced a similar kind of magic. But magic, by its nature, is fleeting. The speaker of ‘Ballerina, Released’ is between two worlds. Compared to her existence as the Firebird, her regular life is unwieldy and disorienting.” While I sense a clear rupture between the fleeting and empowering world of ballet and the “unwieldy” reality, I sense their frequent permeations at the same time. In “Ballerina in Winter,” for instance, the speaker’s dancing feet momentarily meet “wet concrete,” which continues the image of “wet” grief in reality. Can you speak about how these seeming permeations would either change or enhance the presumed separation of the two worlds?

CH: I love those ideas, and I think they’re definitely at the crux of those ballet poems. The two worlds are so different, but they have to touch; they exist in relationship to one another, and there has to be bridges and intersections. When I was practicing or performing ballet, there was sometimes a feeling of being in a kind of snow globe. It was at once amazing to feel that sense of escape or even protection, but also difficult, because it’s illusory. So in writing poems about ballet, I became interested in the places where the ordinary physical world is present in some way, too, because I found there was a certain spark in the colliding of the two realms and their distinct languages and textures.

Bsided: About your broadside “Spring,” you said: “I’d been more attuned to the fragile, I see now, and it’s wonderful to better understand the poem’s allegiance to a kind of solidity.” I was alert to the signs of “solidity” when I was reading your book. To me, it seems to be at the same place where “fragility” lies, such as the balancing body of the dancing speaker as she does triple pirouette. Her one-foot tiptoe looks certainly fragile, but I also feel such sturdiness in her body’s center as she maneuvers every sinew. Does this align with your imagination on solidity of your poems? And if there are other elements where solidity may lie, what would those be?

CH: I’m so glad you asked about that. I loved seeing the solidity and boldness in the broadside. It surprised me in an illuminating way. It’s certainly true that the sense of fragility or delicacy of ballet is in fact only possible through deep core strength and sturdiness, as you say. I do think there’s a parallel in how my perceptions of poetry have changed over the years. I used to focus more on the delicate matters of finding just the right word, just the right line break, all the small but meaningful details. Those things have remained important, of course, but I feel better attuned now to a poem also being something that exists as a robust whole and that claims its space and form in the world, which requires strength and solidity at the center. Seeing the broadside of “Spring” was a big help in widening my awareness of that.

Nayoung Kim is a PhD candidate in English at Brandeis University and an editorial assistant at Broadsided Press. When she is not reading, she wanders around the world of podcasts and anything colorful. 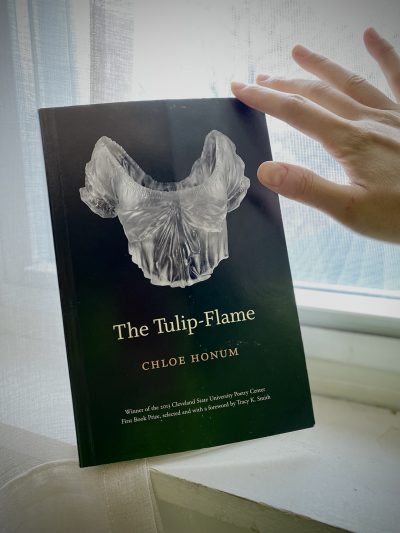