In the opening poem of Katherine Fallon’s Demoted Planet, a daughter listens to a lecture she can’t understand. It’s a dream, and the presentation is illegible from the start; her parents appear with dramatic props and secrets that sound like the possibility of knowledge, but which fail immediately: “Mother didn’t speak and Dad wrote endless code / on the green board.” This father is the book’s center of gravity; the poems center around his presence and then his absence. Here, he asks his bemused audience: “Now then, doesn’t that // make sense?”

What makes sense, in the sense-undoing aftermath of loss? What is the geometry of grief? If we could know just “how and why everything decays,” would that make it easier to bear? Demoted Planet stays with these questions. There’s an elegance to these elegies, a gracefulness even to grieving, but also a willingness to look directly at the messy, difficult realities of caring for an aging parent. These poems leap effortlessly between moments in the speaker’s life, creating an effect in which the father is always both dying and already dead, years gone and still alive: a little like memory.

This narrative thread gives the reader plenty to hold onto, but I also found the musicality of language here buoyant and anchoring: “It was and somehow remains your job to teach me lessons,” Fallon writes in the book’s second poem, “Viewing,” echoing the “clumsy tendernesses” a few lines above. Fallon’s stanzas, often in couplets, feel balanced and measured, and she can write a striking, beautiful description: “Funereal” renders floral decorations “braided together / like parade floats,” and after others have wilted, “the lilies persisted / in velvet soil, tied with ribbon, / their need a dogged weight I wore / like regalia.” In the next poem, the same lily, covered for the winter, becomes “a body               at rest” under its protective white sheet.

demoted planet, imploded star, I wake
because you taught me of landings.

The demoted planet is an apt metaphor here. The father we see in the childhood poems—remote, sometimes violent, sometimes caring and yet also inaccessible— is contrasted by the father we see at the end of his life, vulnerable, betrayed by the limits of his body. The narrator’s reckoning with the father’s mortality feels especially vivid, and moving, when Fallon delves into the ambivalence of a complicated grief. In “Blur,” she writes:

become this: a hazy, screen-like sheath between
myself and the world, like Vaseline on glass,

lack of focus proof that I loved you enough.

I love the paradoxical clarity of this “lack of focus,” and what it reveals: that attachment both draws us towards the world and separates us from it, looking through the stubborn presence of what’s no longer there.

In my favorite poem in the book, “Elegy for My Father,” father and daughter meet in a shared moment of insomnia. We’re located in a kind of continuous present, a night that feels both specific and repeated: inside and outside of time. There’s a strange tenderness to this companionship, in which the father talks and the narrator listens, describing the difficulty of closeness: “his face too much // like someone I knew to look right into.” Sometimes the faces we know the best are the hardest ones to see. It’s the description of the kitchen table these characters sit at, though, that’s lingered most with me:

[…] We’d sit at that awful lion-footed
walnut table they were both so proud of,

couldn’t ever seem to close completely,

Love for a person who is gone can also be this “circle,” permanently incomplete. In that poem’s last lines, an ordinary refrigerator door, repeatedly closed and opened, becomes “a portal we could have / climbed through, together but one by one.”

BSided: Your broadsided poem, “Choke,” begins as a litany of objects and then turns, near its end, towards abstraction—”My words, yours. Nothing / in place of everything I wanted.” I’m thinking about the objects in Demoted Planet, particularly in “Early Adopter,” in which your speaker describes watching her father destroy objects that have become obsolete. I was particularly struck by the “bottlefly / green motherboard that had become / a minute silenced city” and the sequins at the end of “The Nutcracker, Marzipan Dancers, 1986.” Maybe there’s a tension between what’s animate and inanimate, between what (or who) has agency and what doesn’t, between what lasts and what’s impermanent or gets discarded. How does this tension shape your thoughts about objects in your poems?

KF: My work is primarily autobiographical (with embellishment) so the questions you ask about these poems are as much about my psyche as my product. This particular question hit home in that I tend to focus on the transient nature of things, and not in a Buddhist way. I fixate on passage and grieve it, scramble to collect ephemera, try to prove the experience existed in the first place. Sometimes, I will go through my shoe boxes of ephemera and realize I do not remember the significance of certain objects, which creates its own kind of melancholy, a new kind of passing.

As for my relationship to the animate/inanimate, I struggle with the idea that things outlive relationships nearly all the time and outlive people in many cases. Not just in terms of death, but in terms of lasting so far beyond their utility, refusing to decompose. I suppose I also see us all being subject to random order, and so the idea of agency becomes a bit complicated.

BSided: I find the painting on the cover of Demoted Planet totally enchanting. The girl seems so serious; there’s something about her that makes me think of a midcentury novel or a play. As a cover image, this person seems to me like a figure who could stand in for the book’s narrator, or for the father, or somehow both—I’m thinking of the father’s focus and degree of remove. How did this image get chosen as the cover? How do you think of the painting, and its depiction of a certain austerity or quiet determination, relating to or framing this collection?

KF: Headmistress Press, who published the chapbook as part of the Charlotte Mew Chapbook Series, is a lesbian-identified press. Their definition of lesbian is broad and inclusive and, as is true of Demoted Planet, content need not be lesbian in nature, but they prefer that cover art be the work of historical lesbian figures. This particular piece, “Peter (A Young English Girl),” was painted by Romaine Brooks between 1923 and 1924 and features Peter Gluck, who presented androgynously and who entered into an agreement with Brooks that they would paint one another. While we can admire the portrait of Gluck featured on the cover of my chapbook, Gluck’s painting of Brooks remains unfinished. This fact alone led me to choose the painting, considering the concept of transience and incompletion in relation to my focus of elegizing my father. Anyone who dies becomes a sketch of what else they might have done. At times I feel left behind in that I am still in progress; at other times I am saddened by his early passing and what he might have done in late life. This being the fleshed-out painting offers me some solace and helps to turn my attention away from the idea of a work-in-progress that never reaches completion.

BSided: What works by other writers or artists have you turned to the most over these recent tumultuous years? What are you working on now?

KF: I have struggled to read much at all over the course of the past two years, but I believe that makes my effort to connect with certain artists more substantial. I return over and over again to Li-Young Lee, Adrienne Rich, Larry Levis, and Jean Valentine. I draw inspiration from my writing group, featuring Kelly Gray, Kari Teicher, and Rhienna Guedry.

I have a manuscript out for consideration that is focused on queerness and locality and how they interact. Poems about being harassed in New York and accepted in South Carolina; poems about coming to terms with oneself and loving and/or being loved in North Carolina, Tennessee, Denver, Philadelphia, Georgia, Delaware, a farm in Colorado. But my focus these days is mostly on revision. I wrote in a vacuum for nearly fifteen years; some of that old work is turning out to be as relevant as anything I could write today, which is a nice way around writer’s block. I’ve also been playing with fiction with some success. My short stories are long. My poems are short. I haven’t yet made sense of that.

Joely Fitch is writing and thinking about infinity. Some of her poems and essays live at The Shore, Dilettante Army, and Blue Earth Review. 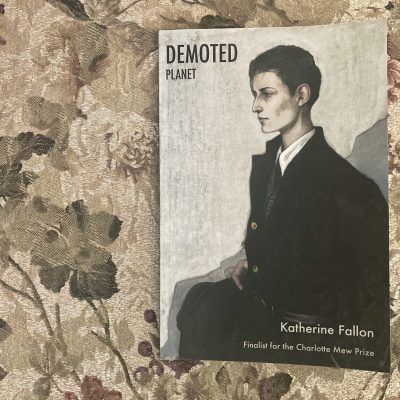