The Insomniac Circus by Amorak Huey is, like all of Margaret Bashaar’s gorgeously handmade chapbooks, bound through its three punch holes with a shiny ribbon, echoing the theme of a three-ring circus. But unlike the bright primary colors one might expect to find on a circus tent, the cover photo (credit, Nathan King) is of a dull russet and maroon striped tent, floating over what appears to be a field of low bushes in a barren landscape. It is an apt image for an insomniac’s dream. The word ‘circus’ may bring to mind a fun-filled outing to the Big Top, but more credibly, it suggests a raw and extravagant display of taboos and mayhem. It is this notion that rings true in these poems.

Within the poems’ titles, we encounter an array of major and minor characters found in circus life—sword swallowers, lion tamers, and fire-eaters alongside lowly ticket takers and audience members. The titles alone are nothing short of amazing—full of wit, mischief, and satire. Here we find, “The Tightrope Walker Gets High,” “The Trapeze Artist Battles Mood Swings,” and “The Juggler Tells One of His Girlfriends That Things Are Kind of up in the Air Right Now.”

Each poem is a story derived from blending the lead character’s quirky traits with a parable focused on human relationships, with no holds barred. We discover that the people in these poems are very much like ourselves with our human foibles, sins, and lusts. We imagine our family, partners, friends, and neighbors naked and shot up with truth serum.  If every person you knew was a caricature of their most outward role in life, and all careers were equated with roles within circus life, you would find an entire world in these poems. There are drugs and alcohol, guns and swords, romance and sex, betrayal and loyalty, cross dressing and costume, alongside the saddest of emotions: loneliness, despair, self-deception.

And consider the miserable insomniac—unable to sleep, tossing and turning with anxiety. In “The Guy Who Walks Behind the Elephants with a Big Shovel Finds Himself in a World of Shit,” we get one window into that restless world:

This is the way insomniacs dream,
the world exactly as it seemed when you were eleven
& everything started seeping out from under

all those closed doors.

Most of the poems are narrated in second person, an interesting choice and one that works well here as it invites the reader to become the subject, drawing us into the story. In “The Ringmaster Answers the Phone,” we are told:

Your birthday in a month no one remembers:
cinderblock sky but no snow. It’s never

good news, this time of night—someone dead
or arrested or worse: drunk & in the mood to reminisce.

This poem was published by Broadsided Press with art by Meghan Keane, who, in a tantrum of graffiti, squiggles a half page of blackened swirls over a set of boxes inside boxes inside boxes, giving the sense that, not only is the narrator boxed in, but also x-ed out.

A few of the poems are voiced in the first person, where their intricacies become more intimate. For example, “The Lion Tamer Resolves to Start Telling the Truth” starts with these shameful admissions:

When my mother calls, I will admit
I’ve been divorced for three years.

& blame her for withholding affection.
I will tell her how miserable my childhood was

I will tell her we lost three pregnancies

& I was secretly glad each time

Each poem is enhanced by an assortment of puns, metaphors, humor, spoonerisms, and finely wrought in-your-face detail. In re-reading the poems, I was moved by the cache of worldly wisdom being dispensed in soupçons throughout the poems. For example, we learn:

The world rushes past your stool // hungry for something more magnificent—

(“The Ticket Taker Gives & Gives & No One Seems to Notice”)

I was one of those kids // convinced I’d been adopted

(“The Clown Fishes for a Complement”)

Some structures // were never meant to stay put.

(“The Ringmaster Answers the Phone”)

And, finally, in “The Father sits in the Front Row with His Family & Convinces Himself That He Takes a Back Seat to No One,” we are reminded that “Everything is performance.”

Indeed. Huey’s poems are written with the emotional distance of performance, which more so than confessional poems, draws us closer, makes us feel that they are about us. I can’t help but tremble when a book can do that.

“The Ringmaster Answers the Phone,”—Broadside with art by Meghan Keene (published March 1, 2012)

Bsided: The poems in The Insomniac Circus are simultaneously pessimistic and comic, much like the tragi-comic milieu of the circus troupe they portray. How did you choose the circus theme? Is there an experience from your childhood regarding the circus that you would like to share?

Huey: This collection started with a pun and a title: “The Sword Swallower Wonders What’s the Point.” I like puns, and I like using them in poems probably more than I should. After the initial rush of pleasure at my own self-proclaimed cleverness, I got interested in the idea of the circus as work. It’s difficult work. Blue-collar work, physical labor, and transient, migratory. But that’s all hidden when the lights go on and everything is spangle and spotlight and performance. That contrast is what drove the collection for me. It became a metaphor for all the masks we wear in our daily lives.

Bsided: It seems as though your experience as a journalist had a hand in these poems; they brim with skewed reportage. How do you think journalism has influenced your poetry, and, on the other side, did having a poet’s mind influence how you worked and wrote as a journalist?

Huey: I can think of two main influences my journalism life has had on my poetry. One is that I’m very much aware of writing as communication and of words as being directly connected to the world outside myself. The second is on the language itself. I spent a lot of years focused on writing clear, concise, straightforward sentences, which is a valuable skill to bring to poetry but also something I sometimes have to fight against: the compulsion to explain rather than to explore or evoke. On the other side, yeesh, I’m not sure. I hope I brought an appreciation for grace of expression and a sensitivity to other people’s experiences and perspectives to my work as a reporter and editor.

Bsided: You seem to have the knack in your body of work of looking inward and outwards at the same time. It makes me wonder how you write, pen or computer, in regular sessions or spontaneously, in a quiet private setting, or amidst the noise and activity of work or family?

Huey: It has been a long time since I drafted a poem with pen and paper. These days I write almost exclusively on my laptop, in quiet settings when I get them, but quite often in and around the happy chaos of my family schedule. I went through a period during which I wrote an embarrassing number of poems while also watching Criminal Minds after everyone else went to bed. I don’t necessarily recommend this process to anyone.

Bsided: You have published two chapbooks and two full length books of poetry and (congratulations!) you have a new full length collection forthcoming (Boombox, from Sundress Press). Can you say what you like particularly about working with each of these formats?

Huey: I love the chapbook because of its concision, its stand-aloneness. To me, it’s a great form for a series of poems that are tightly connected, that explore a single, specific idea or place, like the circus or the farm where I grew up. A full-length collection has more room to wander, to explore, to meander and reach more broadly. Most full-lengths still have unifying themes or subjects, but they’re much less focused. I’m more likely to read a chapbook in a single sitting, but with a full-length I will drop in and drop out, visit and revisit, and I am less likely to read a full length from start to finish in order. So, for me as a reader, they each offer different experiences and different pleasures.

Bsided: It’s been seven years since Broadsided published your poem “The Ringmaster Answers the Phone” with Meghan’s responsive illustration. When you look back at it now, are there any surprises or things you hadn’t noticed before?

Huey: I still love what Meghan did with the image: the contrast between the red on one side and the black on the other and how that works with the tension in the ringmaster’s life. When I look at it again, I’m struck, too, by how much movement there is in the visual, how much energy Meghan was able to create.

Risa Denenberg lives on the Olympic peninsula in Washington state where she works as a nurse practitioner. She is a co-founder and editor at Headmistress Press, publisher of Lesbian/Bi/Trans poetry. She has published three full length collections of poetry, most recently, “slight faith” (MoonPath Press, 2018). She blogs at risadenenberg.com 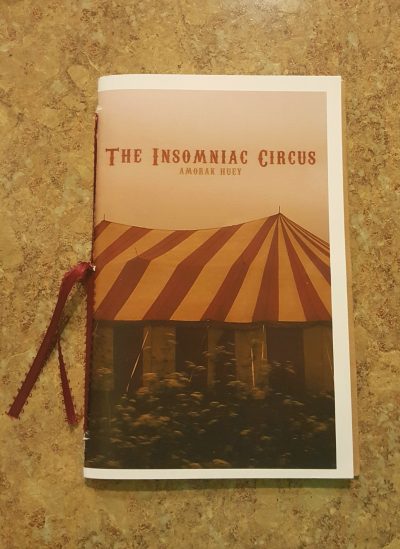