As a person whose only knowledge of astrophysics comes from watching The Martian, I’m going to miss layers in Martha Silano’s book of poetry, Gravity Assist, if I don’t do a little easy research. Silano’s section titles–“Periapsis,” “Orbit Insertion,” and “Escape Velocity”–create a lens, a unifying theme for each section. Though I can always enjoy Silano’s humor and verbal hijinks, once I realize that periapsis is the point of closest approach in an object doing an elliptical rotation, I can look at the poems in that section and ask myself who is going too close to whom and what effect is it going to have. I get to participate in the meaning-making as I engage with poems about a daughter surviving uncertainty, an artist mother balancing life, nature under attack, and the hopes for escape.

In section one, “Periapsis,” a child rotates around a bloodline of alcoholism and hoarding. Silano sees the misery in this family history through playful language:

fricasseed on booze, she dropped to the parquet
ground, the arm not hugging the toilet
hugging her final jug of Smirnoff.

I often feel like my mouth’s been juggling when I read Silano. Here, I open wide for the hard e and u, then my lips have to go in and out for that f j f sequence: “final jug of Smirnoff.” I couldn’t help smiling at the syllable calisthenics even as I faced the painful image.

In the poem “Dear Absolute Certainty,” the speaker sarcastically takes on all the domains that claim to have it all figured out, such as math: “Thank you, 2piR, / 2a + 2b, for certain beyond unquestionable, / for the stupefying quiz at unit’s end.” A poem titled “Instead of a father” makes the reader wait in uncomfortable suspension until the even more uncomfortable conclusion in the first line: “a volcano. A girl puzzling through long division between eruptions.”

This strategy of the title sliding into the poem is one Silano uses throughout the book. Sometimes this creates a painful turn, as in the girl above, and sometimes a quick recovery. So a title like “Time for art in the cosmos is very short,” which is discouraging, quickly becomes a moment of hope “but I brought my colored pencils, sketched.”

The section titled “Orbit Insertion” helped me see more clearly the artist mother trying to adjust her expectations in order to parent. In “The Trilobites” the speaker wants intellectual inquiry “To do-si-do with their nodes” and instead finds “Call Discount Tire” on her to-do list.

Like the onomatopoeic word “do-si-do,” Silano is often very funny. In talking about a hummingbird, she writes:

God must’ve been toking some righteously resinous bud
when he dreamed up these iridescent sparklers, their hairy-

Imagining God high is funny enough, but the image “hairy-tongued sylphs” made me laugh out loud.

But I didn’t laugh when Silano explores how we abuse nature: abuse in the name of science and abuse from our complete disregard for how we move through the world. In “Nearly Every Songbird on Earth is Eating Plastic” Silano gives us this horrific image:

the photo of a juvenile herring gull
clasping in its beak, sailing in its scat,

ridding from its ass the remains
of a Yoplait parfait.

The lines push forward the way the young bird must push to free itself. But there is no escape. “The New Nature Poem,” full of “endocrine-disrupting pesticides” ends:

Reaching out to soothe you,
the twisted arms of the last of three species of endemic

sea stars ripping themselves apart, arms crawling away in

And that’s it. The poem leaves the reader in the middle of a body ripped apart, the very sentence unfinished until the next poem, “Scorching Sinkhole Renga,” which uses the first line to complete the previous sentence. I have never seen this strategy. It was such a thrill to turn the page and see “opposite directions, insides spilling out,” which both created a horrifying image to finish the previous sentence and set itself up as an epigram for “Scorching Sinkhole Renga,” a renga filled with toilets hauled to the dump and political lies.

Section three, “Escape Velocity,” brings hope. In the poem “I am the miraculous,” the speaker says:

I am every bit of physics-escape velocity,
magnetism (weak and strong), the mechanics of fluids

the vectors and the vitreous, the noble gases, the birthing
and dying of stars.

These are Whitmanesque lines. Like Whitman, Silano claims us all as big, glorious, and as powerful as physics. The hope Silano offers does not negate the outrage and horror that the book takes us to. But, neither does it leave us there.

“I’m not Sure Why I Decided” words by Martha Silano with art by Jen P. Harris. Published July 15, 2020 as part of our Broadsided Responds “A Sense of Home” special feature.

Bsided: “I’m not Sure How I Decided” came to be because of the cento sonnet prompt provided by Broadsided. Do you often work from prompts? If so, how do you think they serve you? If not, give us a behind the scenes story on how one of the poems in Gravity Assist came to be.

Martha Silano: Yes, I often rely on writing prompts to help me get past whatever is keeping me from writing on any given day. However, only a few poems in Gravity Assist were born of prompts. When I look over the table of contents, it occurs to me I almost love the stories of how poems come to be than the poems themselves! The genesis of “Ode to Autocorrect,” for instance.

I had a layover at O’Hare after a short visit with my parents. As I often do, I texted a bestie to let her know I’d landed. I tried to type my location but autocorrect kept changing O’Hare to o hate. I texted her this fact in frustration, and then received her insistent reply: Go write that poem. I pulled out my laptop and wrote a draft somewhere between Romano’s Macaroni Grill and my flight back to Seattle. Everything in the poem is true. The guy who was “packing” is my dear ol’ dad. The mother?  Mine. Every one of the autocorrected words derives from a list I’d been keeping for a year.

Poems arrive in all sorts of ways, but this one, in order to write it, I had to take a huge risk. Not just on the page, but with my life.

Bsided: I love the book’s cover art, and I’m curious how you see its relationship to the themes of the book.

Martha Silano: The cover art and design are amazing, aren’t they? I was supremely lucky to work with Robin Vuchnich, Saturnalia Book’s eminently talented in-house book designer. I sent her a list of the book’s main images and themes, and she deftly created a visual depiction of a strong/central female voice, along with natural and celestial elements.  I love how striking and eye-catching the cover is! I highly recommend her as a gifted artist/designer and easy/fun person to work with.

Bsided: I had so much fun with the sounds in the poems. Do you read out loud as you write?    What’s your process for packing sound into a poem?

Martha Silano: Yes, I do read my poems aloud as I’m drafting them. I often can’t finish a draft until I start speaking it aloud.  Hearing myself helps me to cut lines and phrases, find the best line breaks, and replace just-okay sounding words with ones that zip and zing off each other. Along with reading aloud, my process involves many trips to the thesaurus!

Deborah Bacharach is the author of Shake and Tremor (Grayson Books, 2021) and After I Stop Lying (Cherry Grove Collections, 2015). She received a 2020 Pushcart honorable mention and has been published in journals such as Literary Mama, Poetry Ireland Review, Vallum, The Carolina Quarterly, and The Southampton Review among many others. She is an editor, teacher and tutor in Seattle. Find out more about her at DeborahBacharach.com. 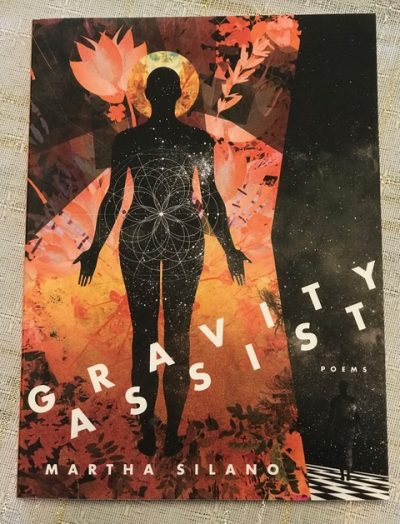