When an important American poetry critic put out a call on social media for names of contemporary Native American poets and received what can only be called a dismal response, Heid Erdrich was inspired to change the outdated anthology game. In New Poets of Native Nations, Erdrich highlights rich poetry of people tied to Indigenous nations, obliterating the “general lack of understanding of what Native American writing looks like” with selections by twenty-one poets from across North America.

Erdrich’s sole criterion for inclusion in the anthology, other than quality of work, was that the poet has a connection to a Native nation. No other factors matter to this collection, not location or blood or tribal enrollment or race. In fact, none of the poets included identifies as “Native American” alone, reflecting the “new” American experience in which there is no lone identifier which accurately categorizes anyone. There is no singular Native experience, as there is no singular Native identity.

In Erdrich’s own words: “[h]ere is a poetry of a new time–an era of witness, of coming into voice, an era of change and of political and cultural resurgence–a time shared…”(xi). This new-time invites the reader to both sink into the poetry as a place and to think about the idea of place as more than geographies, languages, and the feeling in the air. Through the poets’ words and works the “something more” is built:

dg nanouk okpik pulls us into arctic mediation in “She Travels:” “I like to wander/ to find things/ a pretty rock/ a shell/ a slice of baleen/ On this shoreline/ in this time/ here in a karigi/ A /ceremonial dance for snow.”

Cedar Sigo situates the reader in small town living: “Smoke Salmon/ Call San Francisco…/Visit the Suquamish Museum/…Say “hi” to all my cousins…/Drink Rainier beer” (“Things to Do in Suquamish”, 219). Then reminds us that there are two sides of that coin: “I come from Inuit oil money/…I went from the heels at Barneys to the depths of the bins” (“Taken care of”).

Karenne Wood lyrically examines time in “A Memory of Shame:” “because we stayed and because we left/ because our faces were the wrong ones/ because we were treated disrespectfully/… because we wanted to protect them.”

Craig Santos Perez brings us into [our] grim future in “(First Trimester):” “// i wish my daughter was made/ of plastic so that will survive [our] wasteful/ hands// so that she, too, will have a great future.”

These poems gather the languages of our time; words of cities and countrysides, deserts and glaciers, natures and humans. As Dean Rader writes in his review: “This is an important book not just for Native American writing but for American literature and American history.”

Bsided: As we can see in your broadside, the physical and linguistic structures of the poem are important in your work, can you talk more about how the shape came into being?

Heid Erdrich: The poem Broadsided published works bi-lingually in Ojibwe and English. It’s a collaboration with poet Margaret Noodin. Several poems like it—the Lexiconography series—came from me casually reading my Ojibwe language dictionary.  I wove my meaning around contemplation of the words in English and Anishinabemowin, the Ojibwe language. Margaret supplied the direct translation. When I made this poem, I thought about clothespins a lot after seeing the Ojibwe word for clothespin. I had heard that wooden clothespins were no longer being made in the U.S. How strange to think that something women of my mother’s generation encountered daily could be unfamiliar to my grandkids! At the time, I was thinking of ephemeral technologies, so the poem works in that way, too.

Bsided: In your introduction and endnotes you encourage community through sharing of experiences, what prompted you to ask those questions and highlight community?

Heid Erdrich: Not all the poets I admire could be in the book, so I wanted to open a space where poets in the anthology could name some of the poets who are not in the anthology. I wanted readers to see the many relationships between poets, the history of poets moving together, helping one another, perhaps even forming schools of poetry under the Native American poetry umbrella. I thought of the author’s notes as a place to nod to the realities of our connections—often across distinct Indigenous cultures and generations—and to expand the conversation New Poets of Native Nations started.

Bsided: For all the writers you were able to include there were many more who you could not fit, if we wanted to keep reading contemporary Native voices, where would you suggest we look?

Heid Erdrich: Since I selected for the anthology, so many new first books have come from poets who are Native: Michael Wasson’s This American Ghost, Casandra Lopez’ Brother Bullet, and Rena Priest’s Patriarchy Blues. Jake Skeets garnered a lot of attention with a National Poetry Series award for a first book, Eyes Dark with a Mouthful of Flowers. Books I am looking forward to right now include Tiffany Midge’s HORNS from Scalabande, Heather Cahoon’s Horsefly Dress (just out from University of Arizona), and Michael Wasson’s Swallowed Light from Copper Canyon.

Sarah Shapiro’s chapbooks Being Called Normal (tall-lighthouse press, forthcoming) and the bullshit cosmos (ignitionpress, 2019) work to bridge the gap between those who struggle to read and those who read with ease. In addition to writing towards a (dys)abilities poetics, Sarah is spending more and more time thinking about the social and cultural languages of intimacy. 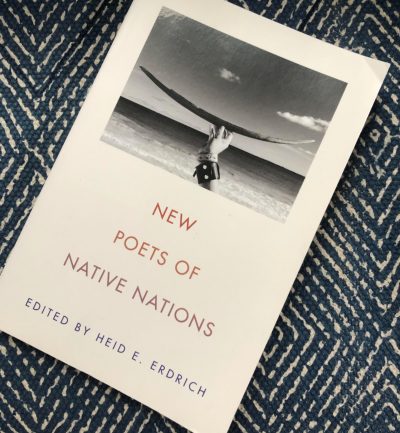