In his second book, Traveling for No Good Reason, George Franklin shoots the reader straight into Zeno’s paradox of the arrow: in any instant, nothing moves. As he writes in “Scrapbooks:”

Of paper and silver oxide, the distance between lives
Can always be divided into an infinite number of points.
The arrow let loose will never reach its target. My mother’s features
Will not change either. She will not give birth to me or eventually
Forget my name and my voice. In the brown-tinted photograph,
She’ll remain a child, caught in her father’s arms smiling.

And yet, like the arrow that does find its target, this collection moves—across the country, across time, across relationships. The title, Traveling for No Good Reason, asks the reader not to create meaning from the travel, but even so, an arc emerges. The speaker moves from not knowing who he is or what he wants to feeling steady and centered in work and love. This poetic balance between stillness and movement, randomness and purpose, creates a delicious tension.

Many of these poems happen in liminal places or places of change—a table near the airport in Miami, on the road to prison (where the speaker teaches), in a car by the side of the road, or, as Franklin titles one poem, “Between.” The speaker walks, drives, and flies in cross country trips with stops in New York, Boston, and Europe, and places that aren’t on the map, like childhood memories. He uses layers of concrete details (“’58 acqua-green Buick” and “pyramids of cigarette filters”) to build from these stopped arrow moments to insights about taking stock of one’s life, mortality, and accepting solace wherever it’s found.

We learn of a marriage where “Cruelty like / Dull scissors cuts unevenly through love.” The poem “Anywhere” is full of possibilities—“It could be anywhere in Europe”. . . “You might have come here with a woman once,” but for me the most important moment in this poem is not in what you could find, but the time spent seeking: “you look at your feet, at the dust on your shoes, and wonder / how long you’ve been walking.” Understanding the journey is crucial, and the second person of this poem draws the reader in and makes them also responsible for taking stock.

In Franklin’s vision, the speaker is sad, frustrated, and often confused by aging and death in friends, self, and loved ones. In one stopped moment, the speaker declares, “There’s nothing smart or good I can say / About any of this.” But Franklin also commends the reader not to waste their life, to appreciate small moments of connection. This thread is so strong, there is a part of me that wonders why Franklin didn’t title this collection “Take Solace Where You Can Find It” after the poem of that name. As he says in “Paradox”:

Forget the traffic and Zeno.
Tonight, I’ll fix a Greek stew with carrot, potatoes, and
Green olives.  We’ll drink a bottle of wine from
Umbria and read poems till we fall asleep.

Franklin: “Shreveport” was very much a part of the first section of the book, “Looking Backwards.”  It is about growing up in the 1960s in a conservative Southern town that felt restrictive in many ways.  A friend, Kacee Belcher, who read the poems when they were first becoming a manuscript spotted that a constant opposition for me is confinement and escape.  Until she mentioned this, I hadn’t realized it, but after she said it, I saw it everywhere.

“Shreveport” has those themes in the same way that other poems in the book do, but it is different inasmuch as confinement takes a visual form, the fences that extend from the high school out across the world.  When “Shreveport” was accepted by Broadsided, Elizabeth Bradfield mentioned in an email how the poem “mapped” the town and extended it.  Again, I don’t think I had thought about that until she wrote it.  Thank you, Elizabeth.

Bsided: I was struck that you capitalized the first word in every line, which is historical but not currently common. I just read a great article by Albert Rios about why he makes this choice. Why do you?

Franklin: I love the Albert Rios essay and agree with him completely.  Thank you for directing me to it.  There are two main reasons for me, and I’m willing to accept that they may just be rationalizations for something I happen to like.

First, the capitalization of the first letter of each line directs the reader’s attention to the line as a primary unit of the poem.  This is obviously true in metered poems but also in free verse.  Lines are a way of emphasizing elements of the poem, and capitalizing puts that front and center.

Second, capitalizing that first letter connects the individual poem to history of poetry.  As Rios points out, it fell out of fashion in the mid-twentieth century.  I think that was because it didn’t seem modern enough.  OK, that’s a matter of preference.  I guess I’m the sort who doesn’t mind a little ornament in my architecture.

There is another very personal and somewhat silly reason as well why I capitalize.  For me, it’s a tip of the hat to Kenneth Rexroth, who used to do that in his poems.  There were a lot of years where I was reading on my own, between college and grad school, and Rexroth was a kind of guide for me.  As I said, this is a little silly, but his best poems still move me.  Eliot had an essay I quoted at length in my dissertation about how when you’re young you latch on to a particular poet and how that affects you for the rest of your life.  Rexroth was that poet for me.  I started capitalizing lines because he did it.

Bsided: I know from your bio and a few of the poems in this collection that you teach poetry in prisons, and I found myself wanting to know much more about that. So, here’s my chance: What do you love about teaching in the prisons? How do you prepare for it? What’s a common writing exercise you do in those classes?

Franklin: What do I love about teaching in prisons?  It’s important to the students, and it shakes me out of my own complacency.  These are men—mostly, I’ve taught in medium-security prisons for men—who are often serving life sentences under terrible conditions, and these writing classes are the only place where they can be valued as human beings, the sort of thing the rest of us take for granted.  It also keeps me in touch with reality.

We live in a world where we are encouraged not to look too closely at what is done in our name to other people.  The reason why prisons are often in remote places like the Everglades isn’t the danger they pose; it’s because they are scary places that remind us of bad things and they make property values go down.  I may not be able to do anything to end mass incarceration in this country, but teaching my students at least keeps me from looking away.  And, I like my students.  They are really interesting, intelligent people.  I wrote an essay for Cagibi on teaching poetry in prisons that goes into this in more detail.

How do I prepare for my classes?  My workshop classes are on Thursday afternoons this semester and are usually based on whatever I’m reading and thinking about that morning or the day before.  I choose poems by writers who are important to me, regardless of when they wrote or their subject matter, and give copies, which I am allowed to bring in, to the students to take back to their dorms and use as prompts for their own poems due the following week.  I was surprised this semester how much my students liked Chinese poetry.  I’ve given them translations by Pound, Waley, and Rexroth, and some of their best writing came in response to these poems.  I also hand out summaries of what we’ll be doing that particular week and write up specifics of the assignment.

A common writing exercise?  I don’t think mine differ a lot from those of other teachers.  I like to start the semester with something I think I stole from Robert Hass, but I don’t remember how or when.  After having the students make lists of concrete nouns and then of abstract nouns so that they get a real sense of the difference, I have each come up with a simple image, like “the book on the table.”  Then, I ask each of them to make a list of potential titles, some serious, some funny, some mysterious.  You might get results like “Jokes for the John” or “Beyond Reach.”  Then, I ask them to read each title followed by the image so that they’ll understand the role juxtaposition plays in creating meaning.  After that, I ask them to write a simple emotional statement, such as “I hate being incarcerated.”  When they put it all together, there’s an epigram that might read something like:

The book on the table.

I hate being incarcerated.

This way each student (usually) comes away with a poem.  We also do common exercises like “Exquisite Corpse,” in which a piece of paper goes around the room, each person writing a line on it and folding it over so that the next person can’t see what was written before.  It almost always produces fun results.

Deborah Bacharach is the author of After I Stop Lying (Cherry Grove Collections, 2015). Her work has appeared in The Antigonish Review, Mojo, Pembroke Magazine, Inscape, Cimarron Review, and Sweet Tree Review among many others. She is an editor, teacher and tutor in Seattle. Find out more about her at DeborahBacharach.com. 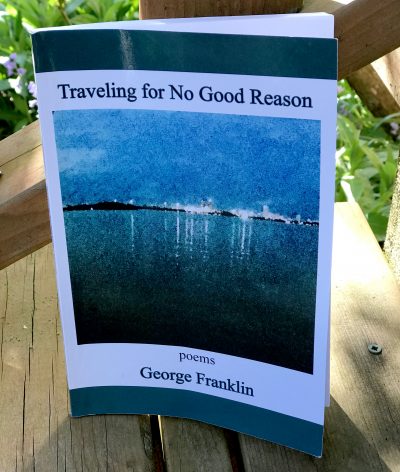