An Uncanny Read, Not for the Faint of Heart

Jennifer Martelli’s book, The Uncanny Valley is indeed uncanny, if uncanny means unexpected and unexpected means startling. The term “uncanny valley” arose empirically to suggest that the more an object (such as a robot) resembles a human, the more the human tends to feel repulsion. If we pause to think about the title before entering the poems, we might guess that Martelli is playing with us by skirting the edge of verisimilitude in order to leave the reader uncomfortable, but not coming so close to that edge that we might be repulsed, or, if we are repulsed here and there, it is not too often.

But Martelli is clever, and there could also be a reversal of intention here, since the poem containing the title words informs us that,

The Uncanny Valley is divided into six sections that progress from “HE” to “HE AND I;” from “THEY” to “SHE;” and from “SHE AND I” to the final section, which is titled “I.” Section by section, Martelli loosely recounts the narrator’s relationships with parents, friends, lovers, ex-partners, and children.

But ultimately, this book is not about relationships. In fact, very little about these relationships is revealed. Instead, myths and ghosts are lodged throughout these poems along with fantasies and hyperbole. We also find queries about: drugs, death and overdoses; sex, colostrum and food; a sexually blooming daughter, a mother with dementia and a dead father, about whom the writer’s feelings are somewhat to the left of ambivalent.

In other words, there are no boundaries around the subject matter; the glue that holds the book together is the treatment of the subject matter, always edgy, often angry, at times undigested, but often with amazing observations and perceptual leaps. There is a lot of pain in these poems and some of it is angry pain and some of it is thoughtless and then redacted and then thought about again. Some of the pain is hard to read, as in the poem “God as a Tiger in a Cage” where she says, “If I could rip out my mind, / I would.” And some lines are genuinely repulsive, as in these, found in “Honeymoon at the End of the Eighties:”

The clitoris, aroused and exposed, was described once as a tower or hill housing termites, made of red mud and spit.

Throughout these poems, Martelli’s dexterity lies in her power to observe closely and translate observations into images that are often remarkable and surprising, such as: “I felt the rain before it fell, like menses,” or “a black luck spider,” or “The snake has cervical eyes.” Similarly, the poems contain many unexpected, but spot-on, metaphors:

There’s no reason to bejewel elephant cows and link them trunk to tail
so they follow in a circle  (“But the Buddha is Kind; Life is Always a Balancing Out”)

The sky becomes thick, // ready to ovulate (“They Fall Each Day, Think of It”)

Somehow and at sometime / God grew a penis.  (“Elysian”)

Martelli’s poem, “State of Deseret,” which was partnered with Caleb Brown’s art and published at Broadsided, combines many of the complex emotional themes that are found throughout the book, making it an anchor for a closer reading of the other poems in the collection.  In it, a surreal mid-section of images from Tarot cards (“a man dangling from his foot”) is sandwiched between earlier confessions (“I’ve counted up / rejections and it’s a sad thing”) and an ending that hints at the huge sadnesses found in so many of these poems.

The last three lines of this poem aroused in me the sort of hesitation that presages an intimate disclosure. These are very brave lines which I imagine the poet worked very hard to spit out:

I’ve only gone to fortune tellers when I feel mean,
and when I say mean,
I mean, I feel a broken heart, someone else’s heart broken, or mine.

Hard work succeeds here. The Uncanny Valley is not an easy read, and it might break your heart. Martelli is well aware of her tendency to shock, to shake us harshly from sleep, to not forgive the ordinary slights and abuses that women have long been expected to absolve. However, there are moments in these poems where kind intentions emerge, as in these lines from “Over a Pu Pu Platter:”

I assure you
that nothing I did was done from spite
or meanspiritedness.

“The State of Deseret” –Broadside with art by Caleb Brown (published February 1, 2016)

Bsided: The poems in The Uncanny Valley cover many periods in the narrator’s life and yet have a consistency of style that pulls them together. It took me a while to make that connection as a reader, but once I did, I was pulled in completely. I’m curious to know over what time period the poems written. Did you feel their cohesion as you were writing them?

JM: Oh I’m so glad that you were able to find that voice that held the collection together. The bulk of the poems were written over a five year period, around the time of my parents’ illnesses and deaths (they died pretty close together). But the pace picked up right around their deaths, towards the end of my writing the book (say, from 2009-2014).

There are some older poems, though, just outside of that period of intense writing; also, there were poems that were re-written after decades. For example, “Picture of a Botched Abortion” grew from a tiny poem I had written about my daughter in the late 90’s! I think it was called, “Mia’s Bath.” The same thing happened with “Girl With Black, Black Hair and the Golden Snake.” This was a one-sentence poem I wrote in a workshop with Lucie Brock-Broido that, over ten years later, became a long poem in parts. I never throw anything out. I love to cannibalize.

I owe the cohesion to Jennifer Jean (who has also been published by Broadsided Press). She took my poems and found the thread, found the order! I had been organizing chronologically—like a biography. She saw the main vein!

Bsided: I loved coming across the ghosts in these poems; they seemed to hover over everything, even when unspoken. Why do ghosts interest you? Are they a device for entering the material, or do they loom more as real in your experience?

JM: I love the idea of two worlds inhabiting the same space and, sometimes, ripping through. I don’t even know if I believe in ghosts, in the spiritual sense, but I believe we all have them, these weighty things. Again, I was writing so much of this after the deaths of my parents, and their presence was very real—or their absence, which can feel like a presence.

I also love the superstitions around ghosts: how they are drawn to us, how to avoid them, why they would even want to visit us. As I was writing, I became interested in Asian horror films (The Ring, The Grudge, Pulse, etc.), which feature these female ghosts, all with long black hair, all very hurt and seeking revenge. So imagery from these movies began to creep in: the red door (from “Pulse”), the hair covering the face like a veil, the floating—these are all features of this genre. I hate to say it, but I identified with these ghosts! I guess if I use them as a device, I use them as agents to convey my own anxieties. In the book, they seem to hover around my father!

Bsided: In “State of Deseret,” I was so interested in the actual history, which was nodded toward in the line “In the State of Deseret, some men marry forty wives. The wives pray to overcome jealousy and hunger . . .” Your poems often use external events to enter very private emotional space. Do you search for these bits to match the emotions you want to express, or do you come across them randomly, and then find that they bring you closer to the emotions?

JM: I loved writing this poem. It began as a prompt, a desert-scape, a devil’s bridge, which drew a blank from me at first. “Deseret” was the original name of Utah, before it became a state. The name is derived from the word for “honeybee” in the Book of Mormon. So, I had the prompt—a picture which probably wasn’t in Utah—and let the image take me from the desert, to the emotion, to a memory, to an emotion. This was a situation where I allowed the leaps to happen, without directing them too much.

I don’t usually seek out images or events for a poem, but when I’m writing—deep in the process of writing—these bits seem to have greater meaning. Sometimes, I can write a poem, and the sense directs the writing in a way that can communicate to a reader. This doesn’t happen most of the time, though, which is why I save all my “bad” poems and come back to them. I find that when I’m writing regularly, these moments when the ordinary has greater meaning and fuses in a way that communicates this double world—the ghost world—to the reader.

Risa Denenberg lives on the Olympic peninsula in Washington state where she works as a nurse practitioner. She is a co-founder and editor at Headmistress Press, publisher of Lesbian/Bi/Trans poetry. She has published three full length collections of poetry, most recently, “slight faith” (MoonPath Press, 2018). She blogs at: https://risadenenberg.com/ 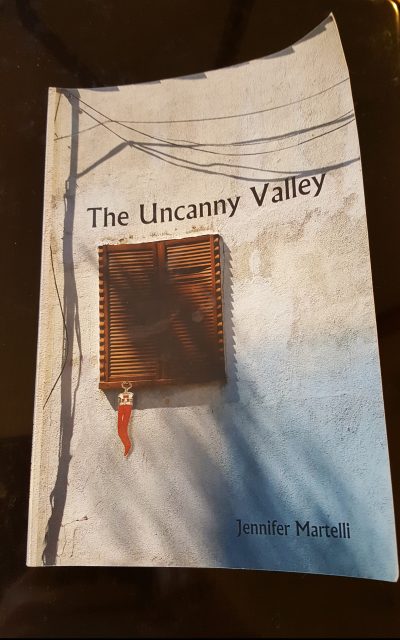