Dilruba Ahmed’s second book of poems, Bring Now the Angels, offers an uncanny witness to our pandemic-ridden moment where so many are dying in a solitude defined by PPE and plexiglass.

The first section of Bring Now the Angels was written as Ahmed’s father was dying, then dead, of “ailments / too numerous / to name” (“Troubling the Marrow”); the second echoes the themes of loss, estrangement, silence. Yet her poems call out for connection, whether through the antagonism of interrogation, the loneliness of a “Google Search Autocomplete,” or the list of items that composed her father’s “Final Registry,” evoking both the man and the life he’d left behind: “Scuffed faculty ID, permit for parking.”

Intimacy here is held in the medical minutiae that replace what previously defined Ahmed’s family life. In “The Feast,” as the family gathers with favorite foods, her father slices open the melon (and the poem searingly drops into the past tense: “He always cut the melon”) and the poet remains poised as if this act would repeat, as it always had. Instead, subsequent poems detail a litany of loss: favorite foods he’s unable to eat, nausea medication he’s unable to keep down, countless blood transfusions, “the basilica of blood…the ichor of strangers.” (“Troubling the Marrow”). The intimacy of foods and family rituals extends to finances as the family’s prayers are raised to doctors (“our newest incarnation of God”) prayers for which money is required, savings drained. “What are we but pilgrims on our final Hajj?” she asks in “$10,000 Pharmakon.”

Ahmed’s “angels” take many forms. Sometimes she demands their help; in the title poem “Bring Now the Angels” she furiously summons witnesses, apothecaries, guardians, clerics, scribes—each one an angel. Sometimes they take the form of automated voices one might find while waiting to be heard, as in the poem “Processing:”

Ahmed’s angels are active: they fold wheelchairs, bring medicine, speak, listen, write. And when there is nothing to be done, they still attend. Later, apparitions of the dead beloved appear: “Nothing / brings the dead back—we both know that—/but still, the lonely bargains.”

In the second half of Bring Now the Angels, Ahmed’s attention broadens, though her focus remains on absence. “Indicator Species” again hints at angels in the form of butterflies, “Who can say / if they aim to warn us,” or in DNA, “a text / the body reads.” She writes of mothers and children, relentless love surrounded by toxins. The intimate list of “Residue,” echoes the list of “Final Registry,” both in form and the gentleness of the poet’s attention as it lights on each item found. In the first poem, the items reveal a life her father lived beyond her gaze, but the second list is her own, an intergenerational archive of lives bound together through stray hairs, steaming cups of tea, a maroon vest.

In “With Affirmative Action and All,” Ahmed evokes the silence surrounding generations of racial violence, “where synaptic gaps / deepen, now, into fissures, into canyons.” Again and again, she returns as a witness to both death and small lived moments from the past. Ultimately, we see how an individual life is comprised of those moments of seeing others, and, therefore, not individual at all.

Bsided: You’ve said, in an interview with Broadsided Press for your Broadsided poem, “Roulade,” that “poets tend to work in isolation,” but I was struck by how very connected your poems are: to other poets, to people you are writing to or about, by the small connections that make up a life. Several of your poems are written in conversation with other poets (Donald Justice, “When the Time Comes;” Roque Dalton, “Self-Guided Tour;” Carlos Drummond de Andrade, “In Everything a Little Remains”) and I wondered whether you see this collection as whole as being in conversation with others, and if so, could you talk about that?

Dilruba Ahmed: Yes, absolutely! This collection strives to make sense of chronic illness, grief, and public losses of various kinds.  The poems embrace both the minutiae that make up a life and the struggle to comprehend whatever divine forces may exist. Of course, I can articulate these ideas now, but the process of composing the poems was very much an ongoing dialogue with the self; with others in worlds both real and imagined; with God; and with the notion of God.

And so while I do work in isolation as a poet, I bring many voices and presences with me to my desk, including Donald Justice’s retrospective meditations on people and places; Roque Dalton’s bitter commentary on governmental structures; and Carlos Drummond de Andrade’s insistent yoking together of all things.  These are just a few examples!

Bsided:  Always, I think, to witness those intimate, mortal, moments you’ve rendered so sharply in this collection is crucial to our understanding of ourselves and each other as human beings. Now that we are experiencing a global pandemic, with deaths mounting every day (but also at a clinical, PPE-covered remove) do you feel the scale and remove of these deaths is different from the deaths you’ve written about in this pre-COVID collection?

Dilruba Ahmed: The loss of a loved one under “normal” circumstances is devastating and incomprehensible. I think of Justice’s grief-stricken poem, “Psalm and Lament,” in which time itself mourns, with the speaker both horrified and riveted by his late mother’s twisted bedsheets. Carl Phillips’ poem, “As from a Quiver of Arrows,” also powerfully conveys the overwhelming sensation of feelings, uncertainties, and anxieties brought on by the loss of a loved one. What do we do with such bedclothes, the poem asks—do they become holy and worthy of preservation? In both poems, the entire world seems to tilt, with perception and experience palpably altered.

The loss of life during this time of global pandemic has been truly staggering—so overwhelming that it’s nearly impossible to comprehend the numbers and their impact on individual lives. The social isolation we are facing increases the challenge of processing what’s happening.  It’s unimaginable that loved ones can’t share physical closeness through trauma and difficulty during this time and that so many have died alone under desolate conditions.  With respect to loss and mourning, the present moment boggles the mind.

Tragically, our so-called “leadership” has failed to acknowledge the massive loss of human life, and to provide the gestures that might help us mourn collectively (speeches, ceremonies, memorials, poetry).  The lack of public expressions of loss and compassion enables this so-called administration to continue proceeding in a haphazard fashion that aligns with its utter disregard for human life.

It’s difficult to foresee what kind of lasting impact this combination of factors will have on our experience of loss as a community, as a country, and as people: the necessary but stifling restrictions on social interactions that can be critical to the process of mourning; a mounting death count that may simply outpace our empathetic capacities; and the absence of public spaces and utterances to provide a shared lens (and sense of purpose) during a time of struggle.

Bsided:  I loved the ghazals in this collection—it’s such a compelling form. Could you talk about what drew you to ghazals for these three poems?

Dilruba Ahmed: Thank you! I am drawn to the ghazal’s capacity to hold, by turns, a multitude of moods and gestures. The form’s kaleidoscopic movement through various tones and topics feels emotionally resonant & authentic to me.  What’s not to love about a non-linear poetic form that traditionally embraces wine-drinking, pining for the beloved (as human, the divine, or even as revolution), and emotional “switchbacks” meant to create surprise and intensity?

While the ghazal possesses strict formal requirements, its “container” can house any aspect of lived experience: personal, public, political. The ghazal form could be compared to a friend who listens to you without judgment, makes space for what you might need to say, and honors and elevates your every declaration, question, and complaint.  There’s more to it than that, of course! The ghazal’s challenge and dare is to dazzle and delight your readers at every turn, without the expectation of advancing a narrative of any kind.

These kinds of formal structures challenge me to approach my material in entirely different ways.  I’m interested in the ghazal’s embrace of both the mundane and the profound—and grateful for the “productive distraction” of searching for words that fit the rhyme and refrain requirements.

Bsided:  “Roulade,” previously published by Broadsided Press, has themes that it shares with this new collection, like the way generations witness one another and the impossibility of speaking directly. Do you find yourself coming back to these themes intentionally?

Dilruba Ahmed: While I do approach some themes intentionally, most of my poems arise from some kind of haunting—a need to explore, to question, to respond, to experiment. I hadn’t realized the notion of communication—and obstacles to it—has been a continuous thread in my work, so thank you for that insight!

In general, I think this thread arises from questions about our connections with others. In my earlier work: how do we understand ourselves and others when we are divided by language, time, culture, and/or geography? In my later work, that idea of division becomes more complicated as the poems grapple with the elegy’s essential question: how do I reach you?

Thank you so much for all of your thoughtful questions and for your interest in my work! I’m really grateful for the time you’ve spent with my poems, and with me.

Carolyn Ogburn lives in the mountains of Western North Carolina where she does any number of things for love and for money.  Her story, “Ordinary Time,” was awarded the Peden Prize from the Missouri Review, and her work has been published or is forthcoming in About Place Journal, The Missouri Review, and others. She has been a regular blogger for Ploughshares, and a contributing editor for Numero Cinq. She’s received an MFA from Vermont College of Fine Arts, and fellowships from Ragdale Foundation and Virginia Center for the Creative Arts. 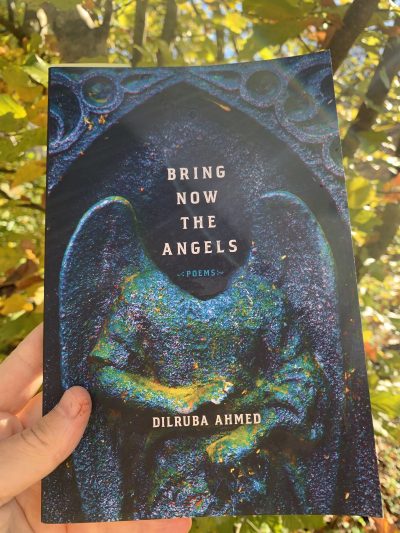