Christina Olson’s The Last Mastodon, the Rattle Chapbook Series 2019 winner, was inspired by her time as poet-in-residence at a 2017 paleontology conference and exhibition (“The Valley of the Mastodons”) at the Western Science Center in Hemet, California.

In the opening poem, “Catalogue of Damages,” published at Broadsided Press, Olson logs human hubris. The poem highlights layers of history with precision: mastodon and mammoth, human ambition and disaster, anthropomorphism and slavery. Olson draws her own relationships into a poetic constellation with the lives of Thomas Jefferson and Sally Hemings as well as the longer history of mastodons and mammoths. As Jefferson instructed Lewis and Clark to search for mastodons on their expedition, hoping they might still be living in the West, Olson herself searches the West. The poem ends in the personal (“I never could make small talk with my father”) and considers the vast power of humans to damage (“Oh god, the mouth is such a weapon”).

The power of the mouth to name, to claim, to silence, to consume, to damage, to complicate, to recover, to make noise, and to enliven pulses throughout this chapbook. The word “catalogue” perfectly encompasses the form of this chapbook as Olson works to fit shards of history together systematically in order to record, collate, and question anew.

The deft poem “Animals Doing Things to Other Animals” revolves, in tightening spirals, around the questions of pulling up history, speaking the damages, and the “maybe” of reclamation. Olsen poignantly draws connections across time and space: “The scientists at the [La Brea Tar Pits] work 361 days a year. / At Monticello, six hundred men, women, children worked 365 days a / year.” (16) The poem enacts historical recovery, allowing competing truths to hold space on the page:

Sally Hemming was Martha Jefferson’s half-sister. Jefferson never remar-
ried after Martha’s death at age thirty-three.
In one version of the truth, Jefferson did not remarry because he loved
Martha and Honored her deathbed promise.
But this is also true: Jefferson did not need to remarry. He had Sally.

Endurance functions as the foundation of these poems, which work to reposition the reader in a more-than-human experience of our shared planet. The chapbook ends with the beautifully aware poem “A Story About Bones,” which draws the work of paleontologists and poets together through a shared language of method:

both the excavating a shard
here & there, an attempt to see what fits
the painstaking assembly of meaning from fragments…

Bsided: The poems in The Last Mastodon take on many different shapes and sizes, from logbooks to sonnets. Did the content lead how you worked with the page or did you start with an image of how the page would look?

Olson: I didn’t have any real sense of what the collection of poems might look like when I started—I just wrote. But I did have a running list of animals or ideas I wanted to make sure were in the narrative, so once I got a few pieces done, I had the barest of sketches regarding forms. While I’ve certainly written lyric poems before, it seemed as if this subject often found its way into that shape. Fossils are fragments, after all; the shape of many poems felt right in fragments.

I did know, once I’d written two flash lyric essays or prose poems (I still don’t know how to characterize those; it changes with every reference) that I probably needed one more, and that it would need to be one of the last pieces in the chapbook.

Oh, and I made myself write the saber tooth sonnet because I always struggle with meter. It’s still not technically right, though.

Bsided: Following the title of the first poem, your chapbook is a “Catalogue of Damages,” and yet there is so much hope in it.  What is the importance of hope among damages?

Olson: I think everything is damaged, and there’s something really freeing in acknowledging that! As someone who struggles with a lot of perfection-related anxiety, it’s liberating to say that everything is flawed in some way. But that was also the first poem of the project that I wrote and I couldn’t shake the idea that mastodons and Lewis and Clark and my relationship with my dad were all related, somehow, and that damage was one way they were related. That’s not the only characteristic they share, of course, but it’s something they do have in common. And yet they are also laced with hope. Maybe not Max, but when Max was alive, I bet he had hope. For a nice cool stream or a lunch of tasty twigs or something.

Bsided: There seems to be a great deal of research which did not get into your chapbook. How did you decide what to include and exclude?

Olson: Yeah, it’s definitely an iceberg type of chapbook—lots of stuff that ultimately isn’t visible above the water line. I think that as I wrote more poems, the focus shifted from 90% paleo things to a more even balance. The Jefferson thread and the dad thread got woven in. And some things just didn’t lend themselves to narrative in the way I needed them to. My friend Katy, to whom I owe this entire project, has done so much fascinating research on mastodon tusks and I really couldn’t figure out how to work much of it in. I’m sure they’ll pop up in a random poem five years from or something.

I also felt really beholden to tell the truth in every piece. My dog did die while I was working on the poems, and they do think Sally’s grave is under a parking lot, and we did drink whiskey up in the mountains, and obviously I felt that it was crucial to get the science right. The paleontologists were so welcoming and cool and the least I could do is not subvert their findings for a poem. So if I couldn’t figure out how to use the research, I set it aside instead of twisting any of it.

Sarah Shapiro’s debut chapbook the bullshit cosmos (ignitionpress 2019) works to bridge the gap between those who struggle to read and those who read with ease. She is a poetry MFA candidate at University of Massachusetts Boston, where she also teaches. 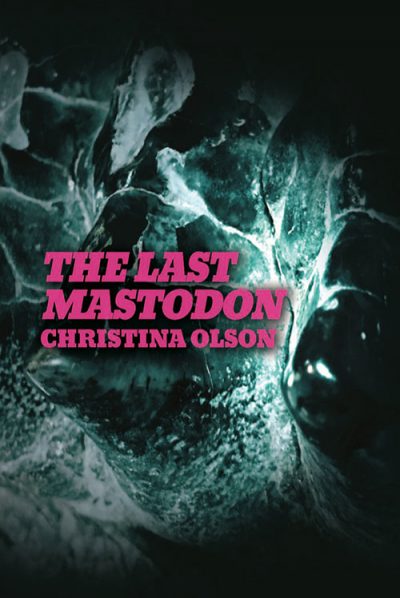