Good poetry reveals the specific in order to connect with the universal—the more specific, the better the connection. Some poets do this by kneading the dough of emotional language. “I’ve been anxious since forever,” reads the first line of Our Lady of Bewilderment, the new poetry collection from Alison Pelegrin.

In this book, we get a meaty taste of how place and emotions can be inextricably linked. Vibrant details reveal that the culture and climate of Southern Louisiana is not synonymous with New Orleans. Instead, each poem is a specific snapshot of a broad and diverse region. And in these poems, place overflows with emotions—reaching from minuscule to mammoth. “Doomsday’s Daughter” goes on to specify the speaker’s fears:

I was on the lookout for war planes
blacking out the sky. Faithful to calamity,
I assumed that every day might end
with a flash flood or category 5.

In response to the girl’s fear of thunder, her father unhelpfully told her, “It only meant the devil was beating his wife.” This undoubtedly forecasts the bewilderment of the book’s title. To that point, in “Bildungsroman” Pelegrin says,

Awake, asleep, I don’t know what I was
in childhood, feeling things deeply
or not at all.

Pelegrin’s twitter handle is “Louisiana made.” It has been her mission to write about what that making was like and Our Lady of Bewilderment does so with language that is both erudite and gutter-bred. These poems echo and reshape her previously released chapbook, Our Lady of the Flood—poems about the effects of Hurricane Katrina in her home state. In an interview with Barn Owl Review, Pelegrin says, “A poet’s job is to rant and rave about the world in all of its ruin, beauty, and cruelty. The south, this small pocket of southern Louisiana, is my world and I will never run out of ways to sing about it.”

Rant she does. The third section of the book is subtitled “Rage Goddess.” In the eponymous poem, Pelegrin leans on The Iliad, as her rage reaches full steam:

Rage goddess, sing the rage of Irvin’s daughter—
wasted, naked, raped, I fume, swoon, gag on the bile
of it, Achilles-like with my wild boar rage.

Yet even in rage, Pelegrin makes me laugh with her as she laughs at herself. In “Myth of Myself,” she describes herself this way:

Coonass mystic is an easy sell, an explanation
for the regional ancestral bitterness

I pass off as a mystery. Also I have fancied myself
a jester of the bayou, sage among dimwits

passing a good time and writing poems
in my shame-tamed ragin’ Cajun accent.

The first section of poems, titled “Rituals for Serving Ambrosia,” brings into sharp focus the unique elements of being raised in southern Louisiana that Pelegrin loves to hate. In the eponymous poem, she lets us spy on the lives she has witnessed:

If not praying, if not bewitching slot machines,
my people are somewhere eating. They step outside
to swoon with the stars and their shadows spill
up the stoop, arms touching like paper dolls.
Sweet, earthly creatures. Ambrosia is theirs.

Moreover, she is “royalty—at the pawn shop”; gets a “taste for the red drink / of my youth” when she returns home; learned at school that “people knew I was a virgin by my walk.”; and had dreams of “a dress / so heavy with shine that I stumbled / everywhere.” As she does in her prequel, Our Lady of the Flood, she celebrates many icons of “our ladies.” In addition to “Our Lady of Bewilderment,” she hails “Our Lady Who Thinks She is a Saint,” “Our Lady of the Ingrates,” and “Our Lady of Whatever.”

Throughout these poems, Pelegrin is attentive and self-aware, but also at cross-hairs with culture and history. Her poems are guileless in their honesty about how Louisiana’s past has seeped not only into her place, but also into her person. In giving us a complex view of Southern Louisiana, the poems call us to examine how much we are each determined by a specific birthplace. In “Excising a Memorial to the Confederate General Robert E. Lee,” Pelegrin says:

But also I am Louisiana Born,

with a rebel attitude entrenched, dug in, a belle genetically
unable to stand down,

In this poem, she is upfront about how being “Louisiana born” slams into the nation’s ugly history of slavery, noting that Lee’s “Dixie gospel [is] a fog / I breathe, complicit, sharing air with good ole boys.”

Pelegrin’s poetry is crafty, such as her decision to put a haiku in the middle of a triple sonnet. And many useful aphorisms grace these pages, such as: “How do we live, knowing as we do / the days run off wasted, water down the drain?” and “How can we be / so different when the same trees rustle in all of our dreams?”

The “Feast of Banana Spiders, Starlight, and Roadkill” was one of two poems from this collection that were made into broadsides by Broadsided Press. Although seemingly an ode to the universe, Pelegrin is quick to clarify how bewildering the universe can be:

Amazing universe, all dance and dazzle—
sometimes it gets on my nerves.
The simplest things overwhelm—

A Covid-themed poem, “Our Ladies of the Quarantine” puts a spin on the benefits of mask wearing: “As we plod through quarantine, one plus is dudes / not prescribing smiles beneath our masks. We can relax, / take deep breaths.”

I’m knowingly not mentioning Pelegrin’s sonnet cycle, “Razor Days,” which is a harrowing and hilarious account of life with her mom. I think you should buy the book, so you can feel the genius in that poem, and read all of it, so you can enjoy the ride.

Bsided: The Basho poem that the book starts out with, “Even in Kyoto— / hearing the cuckoo’s cry— / I long for Kyoto,” is so piquantly mirrored in your poem, “Even in Gretna, Hearing the Cashier Talk, I long for Gretna.” This seems in part a revival of childhood, and part lament, “you can’t go home again.” Later, you say “I was royalty,” in Gretna; but “I never belonged over there,” in New Orleans. Can you describe how growing up in Gretna contributed to your becoming a poet?

AP: I love that poem. In New Orleans, people don’t say Gretna—they say Westbank—i.e., west bank of the Mississippi River— usually with scorn. I went to a ritzy school Uptown, but until I overheard a kid say that I lived in one of those neighborhoods “where all of the houses look alike,” I was almost clueless about the class differences. I loved my home—until then I had never thought to be ashamed of it.

I’m not sure how this connects to me becoming a poet, but I did learn how to keep secrets and hold a grudge. It wasn’t until a poetry class with Tim Gautreaux, a phenomenal southern writer, that I learned it was perfectly fine—even encouraged—to use my voice to write about all the things I had worked so hard to hide.

Bsided: Your humor is sometimes a gentle tease, sometimes a harsh reproach, but it is always specific and nuanced. Where did your sense of humor come from?

AP: There are a lot of jokers in my family, including my dad, and the full-throated, almost squawking sound of his laughter still rings in my ears twenty years after his death. With him, sitting around the table laughing and talking trash was an art form. I think some might find my humor a little snarky, but I don’t think that’s a bad thing. And of course, laughter is the easiest way to disarm someone. Lots of humor comes when you push something “too far,” and poems can come from that same place.

Bsided: One of your poems that was made into a broadside, “Quicksilver,” reflects on witnessing a “rooftop rescue” and describing the futility of “the folly of mammoth sandbags.” The ending, “It clings like tar. / It swallows everything we are,” is a metaphor, yet imparts a visceral sense of the situation after a hurricane. The poem makes me want to ask you about your current thinking about climate change, in respect to your birthplace, southern Louisiana.

AP: That’s a tough one. We had a terrible hurricane this year—Ida. So many trees came down that there is a different light, and sometimes I feel lost even on my daily walk. Katrina was the same way—a permanent alteration of the landscape. At the same time, the days after a hurricane are silent except for the sound of chainsaws and generators—these days bring with them a sense of peace and focus. All there is to do is clear the road, check in on people, pass around the working phones. You cook what you can on a gas stove before it goes bad, and you share these meals with neighbors and strangers, drinking warm beer in the dark.

I don’t have too many more hurricane recoveries left in me. I am terrified about what the world will look like in the next 10-20 years. It’s a sense of dread I think I have carried with me always. I’m resentful as well—the Gulf swallows a nation’s worth of pollution, but the only question asked is, “I wonder if they should rebuild.”

Bsided: Many of your poems are at cross-hairs with culture and history, you call yourself the “ambassador between worlds” (in “Communion with The Rebel Flag”). You have achieved a rare ability to write again and again about the people and customs of a particular place without boring us. Your words repeatedly pronounce southern pride while equally denouncing “its ruin […] and cruelty.” I wonder which impulse predominates in your writing process. Does the inspiration to write a poem occur because you take note of an amazing “this” about southern Louisiana, but then think “but, this?” Or does the opposite occur—something you disdain, reminds you of all that you love?

AP: Whoa—”southern pride” connotes ignorance and hate. A regional sense of pride is different—it’s place- and people-based. That’s where I’m coming from in my poems. Why can’t I love this beautiful, terrible, vibrant, doomed place without it being called “southern pride”? I hate it when the south is perceived as being so hateful and strange, how the show Swamp People uses subtitles—lest onlookers have to lean in to understand a Cajun accent. I guess it’s true that many of my poems come out of this frustration—one minute I’m singing songs of praise, and the next people are chaining themselves to Confederate statues.

Bsided: If I visit you some day, would you make me ambrosia? It sounds delicious and nothing at all like the fakey versions sold in plastic containers up north.

AP: Risa—I don’t know you well enough to make you ambrosia! How about a crawfish boil?

Risa Denenberg lives on the Olympic peninsula in Washington state where she works as a nurse practitioner. She is a co-founder of Headmistress Press; curator at The Poetry Café Online; and an avid book reviewer. Her most recent publications include the full-length collection, slight faith (MoonPath Press, 2018) and the chapbook, Posthuman, finalist in the Floating Bridge 2020 chapbook competition. 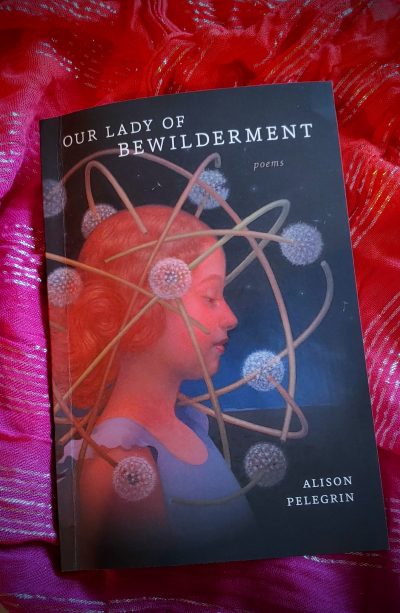