On September 1, 2009, Ryan J. Browne’s poem, “Yard Work,” was published at Broadsided Press with visual art by Douglas Culhane. The poem speaks to Browne’s experience teaching in the Alabama Prison Arts and Education Project and observes activities in the prison yard. In the poem, the speaker builds a current of violence, beginning with dogs being trained to hunt a rag doll and ending with the final lines: “The next day, / in another yard, the guards have target practice.” Culhane’s visual response is a clod of earth—a handful of green grass torn from the yard by its roots— against white space. In the “Collaborators’ Q & A,” Browne comments on that use of white space being like the visual of prison—white jump suits, white-painted walls, white floor tiles.

“Yard Work” was published again in Browne’s first book of poems, Outside Come In. This time, there is no visual art to accompany it, but the commas used in the Broadsided publication have been removed, bringing Culhane’s white space into the poem itself.

From the broadside “Yard Work” with punctuation:

The hounds are out this morning.
Five of them loll in the shade just beyond

the parking lot, snout the grass behind a shed.
A man wearing a blue t-shirt, blue cargo pants,

a badge, and brogans, throws a rag doll, whistles,
shouts Get ’em! and they’re off

with long woofs and yelps, floppy ears,
aware of fear skidding in the wind.

The same poem from Outside Come In with spaces instead of punctuation:

The hounds are out this morning.
Five of them loll in the shade just beyond

a badge    and brogans    throws a rag doll
whistles    shouts Get ’em! and they’re off

Does the above change—space vs. punctuation— affect the way we hear the poem in our head as we read it?

Space crops up again and again throughout Browne’s book in poems of war, boyhood, and in sentences that are not quite completed, or imagery that doesn’t always connect.

A good example is “Parole,” about a student of Browne’s leaving prison:

his poem explores: Much like God
it’s good I don’t need him
because he is no longer there.

could be scoped and gauged by towers…

Indeed, there is often a feeling in these poems that something is not being said. As Neil Shephard (judge for the Bright Hill Press award that selected this book), states in his blurb:

there is light…in the humility, empathy and keen eye with which this poet witnesses the slippage and dismantling of meaning, the genesis of tragedy after tragedy in the world.

Browne’s poems are sonic. His poems ask to be read aloud. There is music in the sound of the words and their rhythm as they become lines. Browne has a syntactical gift: read aloud from “All we have to do,” a poem about World War I:

In those few words with their clippety-clop and “shouts,” “rain,” “taps,” “sighs,” we are transported to the staccato, irregular rhythm suggesting a battlefield.

Outside Come In takes the reader on a journey within the questions of what, or who, is outside and who, or where, is in. While there are no answers offered, two phrases that have stayed with this reader as central to the book are:

All we have to do
is listen…

Something happened…
that I can’t quite write about…

Perhaps coming in from ­anything we experience as inexpressible, and outside, simply requires that we listen.

BSided: Searching for you online took me to your essay in Isthmus magazine, “Birth of a Brewery.” This and the fact that the bios I found are all the same as the one in your book lead me to believe that becoming the father of two and the founder of Working Draft Brewery may have taken your attention away from publishing poetry. Are you still writing poetry? (I loved the essay, by the way!)

RJB: I do have two kiddos (3 and 8 years old)! They’re a blast—and a handful— and they, plus running Working Draft Beer Company, left little time for a regular practice of poetry for a number of years. However, I sold my founding shares in Working Draft at the turn of 2022, and I’m slowly but surely finding my way back to poetry once again.

And, while I was not actively writing verse while managing the company, I still played a part in the local art community in Madison, Wisconsin, using Working Draft’s taproom and visibility to regularly showcase writers, visual artists, and musicians. We often hosted poetry and prose readings at Working Draft, a great way to defuse what seems to be an assumed air of stuffiness or too-serious-ness of some readings or venues. Hard to be too uptight when taps continuously flow, a dishwasher whirs, daily chat-chat continues at the bar, and registers clatter in and out.

In fact, I’d argue that the entire endeavor of founding and operating the brewery was one big poetic project. Everything about Working Draft—the brand, taproom, ambiance, beers, menus, social media posts, partnerships/collaborations— was an intentional invitation for the audience (consumer) to engage on an emotional, moral, aesthetic, and inquisitive level. The mediums might have varied (written language, furniture, can labels, lighting, etc.), but the curated, deliberate deployment of craft was at the heart of it all, sometimes landing just right, sometimes faltering, sometimes unexpectedly leading to surprise, always giving voice to the genuine connections—and joy— at the heart of the business.

BSided: Your poems about war and about spray painting military vehicles at Fort Carson made me wonder if you have actively served in the armed forces at some point? Or perhaps heard stories from family members?

RJB: No, I have never served in the military, but I certainly have family members who have. My cousin is a Colonel in the U.S. Army, set to retire this year, with many tours in Iraq under his belt. The stories he has shared with me from his time in the service are not about battles or fire fights but of a more bureaucratic nature or related to the particular rituals of camaraderie in the Army.

The poem you reference (“Theory of Spall”) is set at Fort Carson in Colorado Springs, Colorado, my hometown. It sprung from a summer temp job I had while back home from grad school. I worked for 4 or 6 weeks, alongside my younger brother, with a company from Buffalo that had won a gigantic government contract to rust protect all US service vehicles slated for deployment to the Middle East. The company originally developed a proprietary product that they used to rust protect school buses in Buffalo from the massive amounts of salt used on the roads in the winters there. They literally just referred to the product as “The Product.”

One detail of that experience that made its way into the poem was how every Abrams tank had a name spray painted/stenciled on the cannon. DARTH VADER, DIPLOMATIC IMMUNITY, DONKEY PUNCH are all names of cannons I saw that summer. And watching those tanks tear across the prairie at over 60 miles per hour (their declassified speed) was truly awesome, filling me with wonder and terror.

One thing that didn’t make it into the poem: one of the guys from Buffalo was named James Joyce! He had many colorful stories about shenanigans at Niagara Falls in his youth and going across the border to Toronto’s strip clubs… James Joyce!

BSided: Do you know if your broadside “Yard Work” was ever posted in a prison or used in prison education classes? And looking back on your experiences teaching in prison, what has stayed with you through the years since then?

I am indebted to The Alabama Prison Arts + Education Project (APAEP), founded by my dear friend and poet Kyes Stevens, for the four years of life-changing experiences I had teaching poetry and literature inside Alabama state prisons. Each moment with the program was a gift, many of which I have yet to unwrap.

As a young poet and educator, teaching incarcerated men and women was the best thing that could have happened to me. Here I was in graduate school, training to be a Writer, with plenty of time to read and write, with a stipend to do so, with all the trimmings and supports of a university program, and it was the prisoners I went in to teach each week who set the pace and served as my role models. They wrote with a ferocity and an inventiveness I could only hope to grab hold of and hang on to tightly as it whipped me around for 14 weeks. They devoured the photocopied poems, articles, and books, then shared the feast around the cell blocks with those not in the class and held their own discussion groups between weekly classes.

All this scholarship and creativity happening in a place antithetical to it, antithetical to the notion that they, the prisoners, are people with the faculties, with the worth, to pursue such audacious endeavors. So, what the hell was I doing with my MFA experience? It was a kick in the butt, to put it mildly.

I’m proud of “Yard Work” and the other poems in the collection that try to capture my experiences going into prison to teach. And I’m grateful to the Broadsided and its editorial staff for selecting “Yard Work” as a piece for publication—it was the first poem I ever had published!

Kali Lightfoot lives in Salem, MA. Her poems and reviews of poetry books have been nominated twice for Pushcart, and once for Best of the Net. Her debut poetry collection, Pelted by Flowers, published by CavanKerry Press was selected as a Best Dressed in March 2022 by Sundress Publications. Kali earned an MFA at Vermont College of Fine Arts; find her at kali-lightfoot.com. 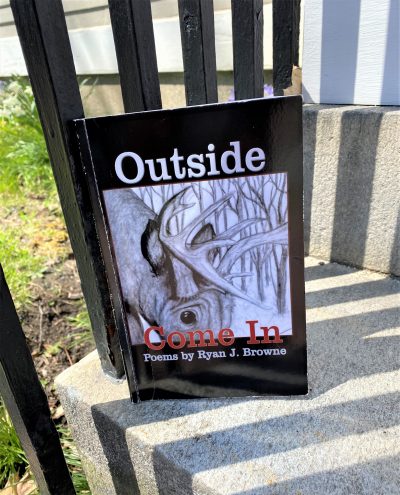