The silence surrounding trauma lies at the heart of Rain Scald, the shattering first collection by poet Tacey M. Atsitty. The first section, “Tséyi’,” draws on the accidental death of Atsitty’s mother and barely-older sister, to whom the book is dedicated. These are poems are filled with sudden, jarring, palpable absences:

we shouldn’t speak,
so young.

Atsitty inserts dashes where details should be, making visual the incomprehesion of loss. Names are omitted, thoughts interrupted, such as here, in “Vail Her Stallion”:

‘Stay away from there; the Brownhat girl, she drowned

in there,’ my uncle told me. ‘A stallion, too.’ Weeds
wound with wave and current; they wrapped her ankles

in a deep current of—just kept her berserk
in the hole where she was found bobbing, caught up,

clouds drifting from her eyes.

Silence also surrounds cultural trauma in Atsitty’s poems, whether found in a history of racial violence, such as the murder of three Navajo men in “Chokecherry Canyon” or the bussing of Diné children to live with families of Mormons (Latter Day Saints) as foster children during the school year: “…the first time he died, the long bus ride when they took him / to Utah for school.”

Songs and images woven from Diné and LDS provide a sense of place when specific history is absent. Their presence also moves the focus away from an individual story towards the larger community, for the individual in these poems inextricably connected to a larger group. Death or violence may alter the particulars of this connection, but the connection persists.

Trauma from domestic violence and environmental trauma thrum as an undercurrent in Rain Scald. Bodies here are thick with casual scars which sting and throb in puddles and dishwater, and, as any fact of existence, are rarely explained. The land of Atsitty’s poems is toxic with heavy metals and radium from uranium mines, resulting in generations of sick and disabled Diné. A child’s “intestines / broke, and he couldn’t pee,” she writes. “He died because he was so full” (“Ach’ii’, 5).

The book’s second section, “Gorge Dweller,” demonstrates Atsitty’s compact use of imagery. Water is used throughout as an image of separation and death. People (usually women) drown in lakes, children in puddles. A gorge is a deep, narrow passage, most often with a creek running through it; metaphorically, this gorge separates dead from living. In Diné history, Atsitty’s end-of-book notes explain, First Man and First Woman fought and separated for an extended period of time on either side of the gorge. The beautiful poem “Nightsong” (34) is dedicated “to gorge dwellers,” and Atsitty’s notes tell us that different tribes hold beliefs regarding the ability of the living to communicate with the spirits of the recently deceased. But “gorge” also refers to the human esophagus, and Atsitty frequently refers to the throat and uvula. Gorge dwellers may refer, metaphorically, to those who live by speaking or singing, when so much is unspeakable and yet staying silent may be deadly.

The book’s final section, “Tohee’,” draws its title from the “extinct Navajo ceremony used for calling rain, healing paralysis, resuscitating from drowning and deafness, and handling dreams.” Several of the book’s most powerful poems are found in this section. The poem “In Strips” (51) uses a form that breaks apart a page of text into a patchwork of women’s work, women’s bodies, of rocky landscapes and distant rain. The last of four stanzas read:

Atsitty employs repetition as incantation, whether of images, sounds, syllables, or refrains: “this, this…is not…is…is not…is.” Stitch calls to wrinkle calls to sack calls to bark. To call requires, first, a separation. The collection’s final poem, “Evensong,” opens with a villanelle and ends with a psalm to the Diyin Diné’é, or Holy People, a pleading cry to “show me how I am human.” (71)

In the question is also the response.

Bsided: You write so well in formal verse, and use these constraints to great effect. How or when do you realize that a poem will work best using a particular form? And does it ever happen that you find that you should abandon the form, and let the poem ride its course in its own way?

Atsitty: Thank you. Sometimes I sit down to write a poem in a particular form, and other times the poem just reveals itself in the form it wants. Usually the content and form go hand-in-hand.

Yes. There are times when I’ll be writing a poem in form but it doesn’t want to fit within all the perimeters. I’ve learned it’s ok, in those moments, to break the form for the integrity of the poem.

Bsided: I was struck by your evocation of water as an element of destruction throughout this collection. But there’s also tension, as, for example, the end of the poem “At Evil Canyon,” where the narrator dips her hands “into lake clouds, a rock-deep cool.” Do you find that tension between destruction and nurture in other elements?

Atsitty: Too much of anything isn’t good. Same goes with the sun. He nourishes the earth and us, gives light and heat in intervals. But too much sunlight can kill. Thank goodness for clouds and the lesser light: moon and stars.

Bsided: In the poem “Ach’ii’,” you write that your father “remembers the first time he died,” as being taken from his family’s home to Utah for school with the Indian Student Placement Program. But you’ve also drawn from hymns, psalms, and LDS beliefs in these poems in a way that seems to indicate deep respect and attachment. Could you say more about your relationship with Christianity?

Atsitty: I’m grateful you asked this question. My father’s parents signed three of their four children up for the Indian Student Placement Program, including my father. They believed their children would receive a better education than what was presently being offered on the reservation. As a result I was raised in the Church of Jesus Christ of Latter-day Saints, and I’ve embraced the restored gospel of Jesus Christ; it is my life. It’s interesting to me when the topic of Christianity is omitted from discussion about my work because I strive to have Him in my every word, action, and thought.

Bsided: You edited a translation feature for Broadsides to Books in 2017, and in Rain Scald, you frequently use Diné language alongside English.  Since the Broadside is a visual medium, I’m interested in any thoughts you might have about the purely visual aspect of employing multiple languages in poetry. Does the second language alter the poem’s meaning without changing a word?

Atsitty: When I employ Diné Bizaad in my work, it’s because it’s the only attachment to an idea, being, or song I know or because it has a deeper resonance than its English equivalent. Visually speaking, Diné Bizaad, looks thicker on the page, like mountains. Chunkier, and it’s because an entire sentence can be in one long word. For example, in the poem “Hand Trembler,” I write it in Diné Bizaad mid-poem: ndeelniihii. This word is an entire sentence: “ndeel” means “movement,” “nii” means “arm,” and “hii” means “the one who.” Altogether it means “The one who has arm movement,” or in other words, a hand trembler. To me, the word gives the poem authenticity with its presence and evokes its history and story.

Carolyn Ogburn lives in the mountains of Western North Carolina where she does any number of things for love and for money. Her work has been published in The Missouri Review, Queen Mob’s Teahouse, Empty Mirror, and others. She has been a regular blogger for Ploughshares, and a contributing editor for Numero Cinq. She’s received an MFA from Vermont College of Fine Arts, and fellowships from Ragdale Foundation and Virginia Center for the Creative Arts. 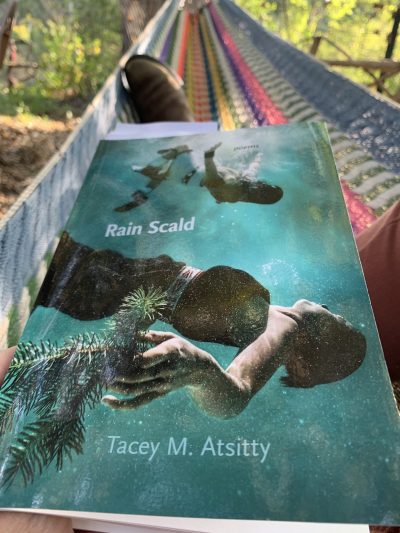