In 1964, the now-forgotten poet Walter Lowenfels published a book of letters called To an Imaginary Daughter. Lowenfels, who had four real-life daughters but chose to write about an imaginary one, dedicated the book to his children, “hoping they won’t mind this addition to our family.” In a separate letter to English poet Cressida Lindsay, the poet explains that these letters are “happenings when everything else including the typewriter is lost, and there’s nothing to say except what always escapes and only later turns out to be an important thing.” The paradox he describes–that the only thing worth saying is what escapes being said–is also the motivating force behind Brittney Corrigan’s Daughters, a collection of persona poems that moves deftly between myth and history, fable and fact.

Like Lowenfels, Corrigan invents imaginary daughters. But rather than address them from a distance, she inhabits a dazzling variety of consciousnesses–from Bigfoot’s daughter to Medusa’s, Siren’s daughter to Amelia Earhart’s. This perspectival flip is as important to understanding Corrigan’s work as the individual daughter-personas themselves. She reverses the current of the patriarchal imagination, giving the lyric speakers their own sense of agency and creative autonomy.

The result in Daughters is an exploration of gendered speech that vacillates between joy and struggle: while the book’s fifty daughters gain the power to speak for themselves, they remain acutely aware of the forces conspiring to keep their voices muffled at the margins of history. Daughters turns “what always escapes” into what must be said, unraveling not only the idea of masculine literature but also the conventional expectations of father/daughter and mother/daughter relationships.

The collection’s first poem “Bigfoot’s Daughter” addresses the conspiracy theorists who hunt her father down, apparently sympathizing with their desire to make the mythical actual:

You want to believe in the bulk
and brown of him reeling through
the thicket, that flash you thought
you saw, the eyes that spun. You want
terror to walk beside you, you want
the wild rush of escape, you want the story.

Yet if the poem opens with a desire to own “the story” of Bigfoot’s terror, it closes with the recognition that such stories, like Bigfoot himself, cannot actually be captured: “We can make you believe what you saw in the woods / is something fierce and secret,” the speaker notes, but that faith is merely “the story / of your own longing…not yours to claim.”

Lurking below the book’s inventive play is a political rage at the injustices done to young women throughout literary history. “Siren’s Daughter,” for instance, rejects the idea that the sirens sing “to enthrall / or summon a man.” (“Our songs are not for you.”) At the end of the poem, the Siren’s daughter explains that luring sailors to their doom is merely a nuisance, an unintended consequence of song. It is men’s fatal inability to leave the goddesses alone that has forced them to “make [their] homes / among the sharpest rocks” and “roughest whorl of seas.” The heterosexual fantasy that torments Odysseus’s crew is, it turns out, just the Sirens’ latest attempt to sing their song in peace.

Likewise, Amelia Earhart’s daughter, who narrates the next poem from her mother’s imagined last landing space, speaks also for the Sirens when she admits, “My secret is I’m glad they haven’t found / us.” True to their refusal to be claimed, Corrigan’s poems don’t limit themselves to a critique of literature’s masculinist tendencies. Although the final poem in the collection, “Yeti’s Daughter,” ends with a familiar taunt (“You’ll never / find us, prehistoric in our hiding. / And you set on your massive gods”), others, such as “Not {Daughter},” propose alternative ways of making poems and stories out of the material realities of womanhood:

This body will not be
cocooned, will not be
hived. Will be worn in
{one} world more than
{one} way. There is more
than {one} kind of world.

In this poem, Corrigan implies that liberating women’s bodies from the “cocoons” and “hives” of patriarchal poetry might also mean breaking from the condition of being a “daughter,” becoming instead a “person renamed, / reclaimed.”

“Beekeeper’s Daughter” is an especially moving example of the alternative worlds Corrigan’s poetry builds. The poem’s “body” at first appears to be “hived” in six six-line stanzas trapped in the six-sided form of a honeycomb. Yet unlike the stilted iambs and objectifying gaze of patriarchal poetry, Corrigan’s “hived” poem relies on a productive tension between form and content; within the honeycomb the beekeeper’s daughter watches in awe as her mother “walk[s] among those who would hurt her, / reach[es] inside their dark residings, / and come[s] up honeyed and sweet.”

Bsided: Daughters is, as other poets and critics have noted, a series of persona poems. Persona poetry has an ancient history, but I’ve never come across a book like yours, which ranges from Bigfoot’s daughter to a taxidermist’s, from Siren’s daughter to an active shooter’s. Yet the poems still feel unified by something like “daughter-ness,” despite their refusal to stick to a single category of personification. What is the condition of “daughter-ness” to you, and how is it distinct from broader notions of womanhood or childhood?

BC: As opposed to womanhood, I think of daughterhood as being specifically in relationship to one’s parents. And as opposed to the broader umbrella of childhood, daughterhood comes with a set of inherent societal expectations and challenges placed on girls. With my poems, I wanted to explore a wide range of parent-daughter relationships, with all of their joys and difficulties. As the jacket description of my book notes, the poems explore what it means “for a girl to come out from under her parents as a woman of her own making.” Some of the daughters—such as “Surgeon’s Daughter” and “Lepidopterist’s Daughter”—yearn to find themselves within their mothers’ sometimes overwhelming attention. Other daughters are dealing with larger issues such as an alcoholic or abusive father, an ailing parent, or struggles with poverty or mental illness. And all of the personas are working to define themselves not only as daughters but as women within their own right. Their “daughter-ness” is a common denominator among the voices, but each of them gives voice to very different experiences within this larger construct.

Bsided: Your poetry is so deeply concerned with different kinds of transformation–physical, psychological, interpersonal, etc.–that I can’t help but think of Ovid’s Metamorphoses. These lines stuck out as especially Ovidian: “The pleasure of unexpected / joining. The creation of what / we wish we could love” (“The Taxidermist’s Daughter”). Unlike Ovid, however, you interpret these transformations as largely gendered phenomena. Was wrestling with Ovid, or broader literary history of metamorphosis, part of your writing process?

BC: I have long been interested in transformation and metamorphosis (my undergrad thesis was a series of poems exploring animal transformation motifs in mythology, folklore, and fairy tales). So while I wasn’t consciously thinking about Ovid while writing these poems, those stories definitely play the role of muse for me and are parts of my poetic lexicon. And yes, many of the poems are about transformation and the daughters taking control of their situations. Some of the daughters actually appear in Ovid’s stories (Medusa, Minotaur, Siren), but many others who don’t also wrestle with the age-old themes addressed in Metamorphoses: love, gender roles, the natural world, and, yes, transformation.

Bsided: While your poem “Fossil Record: Smilodon” is not a part of Daughters, there are elements of it that speak toward strangeness, toward transformation. How do you see “Smilodon” and the poems of Daughters in conversation?

BC: “Fossil Record: Smilodon” is based on my own experience as a child visiting the Denver Museum of Natural History. I’m definitely drawn to the strange and fierce, and the language of the poem reflects that. In terms of the poem being in conversation with Daughters, I’d say that “Smilodon” is most reminiscent of “Lion Tamer’s Daughter.” The imagery around the ferocity and allure of big cats is similar in the two poems, and in both there is a tension between the speaker and those cats. The daughter of the lion tamer both loves and fears the big cats and knows that her freedom, or lack of it, is reflected in their captivity and submission. In “Fossil Record: Smilodon” the speaker—the young version of myself—is similarly drawn to and fascinated by the museum’s beasts and has a sense of her smallness among them. In both poems, the speaker is transformed from insignificant or helpless into someone who might walk away unscathed—if she’s lucky.

Bsided: You write in “Not {Daughter}” that “This body is {one} body in a world of bodies // But I am {not daughter}. / I am remade, unshelled.” What is the relationship between the “bodies” of your poems (i.e. their visual forms) and the bodies of the women you write about?

BC: “Not {Daughter}” was written for my younger child, who came out as trans/nonbinary during the final stages of completing the manuscript. I wrote that poem for them, exploring what it means to have been born a daughter but no longer identify as one. That poem in particular is concerned with the body and what happens when your body doesn’t match who you are. As to the visual forms of the poems, there are several concrete poems in the book that take on the shape of their topic. Since I had set myself the challenge of writing all the poems as six stanzas of six lines each, varying this structure visually was something I was interested in exploring. I think concrete poems can be whimsical but also immersive and arresting, depending on their subject matter. For instance, “Alligator Wrestler’s Daughter” takes the shape of an alligator and uses the fight with the beast as a metaphor for combatting depression, and “Death Row Inmate’s Daughter” is written in the shape of prison bars. Giving myself a formal structure of making the words conform to a certain shape helped me to write about difficult materials, maintaining focus and concision. I think these poems are less about the bodies of the daughters than they are about the shape our dreams and demons can take.

Dominick Knowles is a PhD candidate and the poetry editor of Protean magazine. Their poems have appeared in Prelude, Prolit, Glass, and elsewhere. 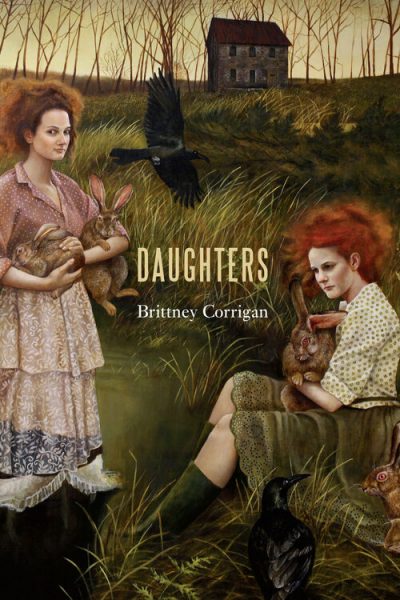