Pelvis with Distance: A Biography-in-Poems / Self Portrait by Proxy

To read Jessica Jacobs’s 2015 debut collection Pelvis with Distance is to read yourself for a brief time into the lives of Georgia O’Keeffe, Jacobs, and, to a lesser extent, Alfred Stieglitz.

This book exists in a liminal space – not quite biography, not quite memoir. Its poems are by turns and sometimes all at once persona, epistolary, and ekphrastic.  They record not only the relationship of Georgia O’Keeffe with herself and Alfred Stieglitz, but Jacobs’s experience of studying O’Keeffe through her art, diaries, photographs, and letters.

The collection begins with a prose description of Jacobs arriving at a cabin surrounded by O’Keeffe’s beloved high desert country. Like the silk threads O’Keeffe used to construct her clothing, this and subsequent prose moments stitch together a narrative as Jacobs’ poems and her love of O’Keeffe deepen during a month of solitary study:

Three weeks in and canyon life is tidal life. Days wash in and out. / After our morning run, the dog and I sprawl on the porch like petals open with heat. Notes and books weighted against the breeze as we edge like hour-hands round the deck, shadow-synced, just beyond the sun’s creep. (70)

There is so much going on in these short poems written of their many voices, places, and times, that it would be easy for the reader to feel ungrounded were it not for Jacobs’ very careful guidance within the titles and epigraphs of each poem and reference notes in the back of the book. It is possible to simply read each poem for what it is, but paying attention to titles, referring to the notes, and accessing the visual materials online gives the reader a much expanded experience, paralleling Jacobs’ own experience of coming to know the people and places she is writing about.

The title poem “Pelvis with Distance” responds ekphrastically to the painting of the same name, and it is also epistolary—an imagined letter from O’Keeffe to Stieglitz. O’Keeffe herself wrote of the painting:

I was most interested in the holes in the bones—what I saw through them—particularly the blue from holding them up in the sun against the sky as one is apt to do when one seems to have more sky than earth in one’s world…they were most beautiful against the Blue—that Blue that will always be there as it is now after all man’s destruction is finished.” (125)

…Pelvis
is loupe, is meant

by bone, ambit
of absence.

I am, you are,
always

looking
through the other. (77)

Jacobs often writes around a word or phrase uttered by O’Keeffe or Stieglitz, and those are not italicized or identified in the poems but are detailed in the notes. The fact that they are not immediately identifiable may disturb the more academic among us, but it makes the poems flow without interruption through the arc of the book and the artists’ lives, and achieves the sense that Jacobs has really creatively entered O’Keeffe’s self-narrative.

Pelvis with Distance is an astonishing piece of creative work. Readers who have experienced the current touring exhibit: Georgia O’Keeffe: Living Modern will find this book a great addition—it could have served as part of the exhibit catalog as it evokes much the same feeling about O’Keeffe’s life and work as the exhibit does. And readers whose only knowledge of O’Keeffe’s work comes from the flower posters on their dorm walls, will be amazed to learn a bit about who the artist really was: classically-trained, self-curated Modernist, independent, tough, and vulnerable to great loves.

Bsided: Looking back on your month in the high desert without electricity or human contact, what do you feel were the gifts of that time—other than the amazing poems in this book?

Jacobs: I’ve often traveled alone but this was my first experience of true solitude, of day after long day waking as the sun rose and going to sleep soon after it set late in the summer evening, paced only by that landscape, which is somehow both spare and lush, and whatever needs and inclinations rose in response to each hour. And, as I chronicle in the collection, every day, contrary my usual slow-composing self, I wrote a poem, taking a deep bodily satisfaction in the research, writing, and revision. Though I loved all that followed—the joy of first holding a book with my name on it, of going on a crazy cross-country book tour with my wife, and receiving lovely responses from those who read it—one of the real gifts of that time was the lesson that nothing felt better than the actual writing of the poems and the discoveries I made about myself and the world as I wrote them.

Bsided: Your second collection has recently been published (March, 2019)—thank you for letting us know in that book whether you mailed the letter to “The Poet!”—do you have a notion about what’s next in your writing life?

Jacobs: Yes, Take Me with You, Wherever You’re Going, is an account of my first years of marriage to Pelvis with Distance’s The Poet (ha!), a record of going from the solitude I explored in that first book to learning—or at least starting down the road of learning—how to share a life with another person.

In addition to giving me time to reflect on my feelings for the woman who is now my wife, my time in the canyon also opened a space in me for large questions that my normal resources, like literature and lived experience, couldn’t address. To my great surprise, I found myself turning to the teachings of my cultural heritage, delving into Torah, midrash, and the works of Jewish scholars such as Abraham Joshua Heschel, Gershom Scholem, and Avivah Zornberg. So, now I’m at work on a series of poems growing out of these studies and each portion of the Torah, trying to share some of the wisdom I’m so grateful to be finding there.

Bsided: The Broadsided poem, “Lake George, 1922” is a persona poem from O’Keeffe’s perspective of the Stieglitz summer home in New York. Did the poem come from a specific incident that was mentioned in your research, or is it made from what you knew of O’Keeffe’s feelings about the Lake George gatherings, and how you imagined the scene would play out in their push-me-pull-you relationship?

Jacobs: This poem, as did most in the collection, rose from a number of sources. I spent a good deal of time staring at the painting itself (you can find all images relevant to the book’s poems here), considering how its serene nature conflicted with O’Keeffe’s struggles with Stieglitz’s family, which she recounts in her letters, who wanted her to be a more conventional housewife. The images of rain entering the water are pulled from childhood memories of the Florida lake on which I grew up. And, as this was early on in their relationship, though she clearly loved him, I also couldn’t help but imagine O’Keeffe bristling at Stieglitz’s efforts to shackle her with notions of confining femininity, both literally and figuratively jumping overboard from the small boat in which he rowed them.

Kali Lightfoot (www.kali-lightfoot.com) lives in Salem, MA. Her poems and reviews have appeared in journals and anthologies, and been nominated by Poetry South and Lavender Review for Pushcart Prizes. Her first poetry collection will be published by CavanKerry Press in April, 2021. 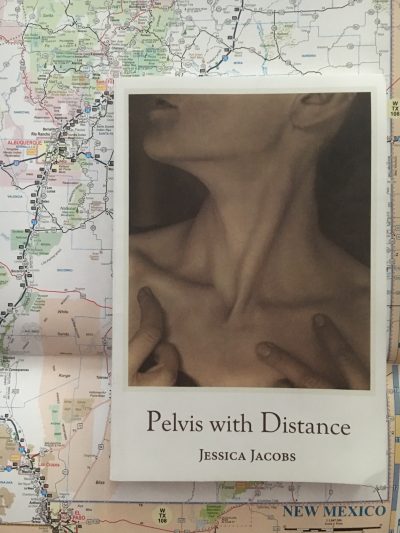