In Corrie Williamson’s The River Where You Forgot My Name, a poet wanders through her world, straddling distance and time, uncovering curious bits of nineteenth century history, and observing natural and human landscapes.  As she does, the sadness of remnants and the loneliness of whales, among other things, preoccupy her. With these poems, Williamson delivers us to her pervasively pensive mood, like a longing that will ever be unfulfilled.

The book’s sections are labeled by place and move between past and present: Virginia, 1804-1808; Montana; St Louis, Missouri, 1808-1818. It concludes, solemnly, with “A Prayer in Closing.” The book’s preamble poem, “Hay Cutting, Fincastle, Virginia 1803” imagines a prosaic event, where “the reapers gather / at the edges of the grass” and finishes with this visually stirring couplet:

their scythes like a flock of steel
birds released from the field.

Many of the poems reflect on correspondences and legends of the Lewis and Clark Expeditions (1804 to 1806). Many are subtitled with date and place (as in, “On the Death of Meriwether Lewis, Saint Louis, 1810”).  In endnotes, Williamson explains:

The poems in this book set in the early nineteenth century are written in a voice I have imagined for the real-life person of Julia Hancock, born in 1791 in Fincastle, Virginia (where I was also born and raised), who was married to William Clark at age sixteen.

In these poems, we track the deep connections Williamson is able to make with this piece of history. The title poem refers to a river that William Clark named “Judith River” after his young wife despite the fact that no one but her father ever called her by this given name. Williamson digs right in to find the pathos held in this historic footnote:

…Into
the darkness where
the beast was born
flows the river where you
forgot my name, gifting
it to the girl only a father
ever summoned as “Judith.”
Forgivable, like most sins
of omission, for a man
who knew only
the obedient child

Williamson’s poetic talents are embodied in her lush and explicit language. She dissects language brilliantly, but in a playful way: pairing “ominous” with “omen-ous,” imagining a future where “de-extincting” is possible, noticing that “Hide is flesh & also / my first instinct,” and musing that “yarrow . . . weaves together yesterday and tomorrow.”

She is also a dazzling storyteller, as in “Bread Alone” where one baker asks another for a pinch of his starter culture and is denied lovingly by his friend who says “ask me for sugar, for flour, for honey brewed by bees from high mountain meadows” but not the starter, because,

…no, he cannot give them a bit of the
batter that dwells in a plastic bucket by his rusty ovens, birthed 150
years ago in the windy darkness of a kitchen in Great Falls at the
hands of a Scotch sheepherder plying yeast with water, with wheat
that bloomed & died in the surrounding plains, risen from the wild,
the dough a thing with breath, souring into a richness …

In the short poem, “Science Lesson, Fincastle, Virginia: 1805,” (which was selected as a broadside by Broadsided Press), Williamson gives us this enigmatic and gorgeous detail, “violet as a turnip in a tin bucket,” and ponders how emotion and myth easily can overtake scientific knowns:

What a little fool to think the moon
free & unheeled, to assume she visits

of her own volition, dons her dark
tunic & turns her back upon her

The compassion in these poems is coupled with far-reaching wisdom, demonstrating Williamson’s ability to embrace the earth and its creatures as they were in the past, as they are now, and what may portend for all of our futures. In “52 Hertz, a letter to Shea in Kitty Hawk, North Carolina,” she ponders “the whale known as the loneliest leviathan on earth” and says, “I can hardly stand to think of it—that solitary keen in the ocean’s dusk.” But drawing on her sense of the inexpressible, the ineffable, she adds, “Have you considered the possibility the whale is singing into silence, into a trembling in his own bones?”

Bsided: Many of the poems in The River Where You Forgot My Name are written in the persona of Julia Clark. How did you first become interested in the Julia Clark figure?

Williamson: Well, I became interested in the Lewis and Clark Expedition as a very young person growing up in southwestern Virginia, an area saturated in their history. I don’t remember quite when I first latched on to Julia…. I think, alongside the narrative of the expedition, she’s been in my awareness for a long time. Part of the claim to fame of my little hometown of Fincastle is that the Hancock family lived there. Clark had this place very much on his radar shortly before and immediately after the expedition, when he returned there on a mission to marry the much younger Julia and take her west with him. Once I moved to Montana and was even more immersed in that Lewis and Clark narrative and the idea of the development and “opening” of the American west, I found myself working in my poems to better understand and to challenge it, to reveal and address some of its darknesses, and Julia called to me from the shadows.

Bsided: In your acknowledgments you describe this book as a “haunted project.” Can you say a bit more about that?

Willliamson: This book was a reckoning and a maturation for me. I confronted and struggled with many of my own biases and naiveties in writing it… and my place in the bigger story. And of course the book is full of ghosts—imagined and historic, animal and human and machine—that I felt dogging me and demanding my attention during the five or so years I worked on these poems. Lisa Russ Spaar, a former teacher of mine and wonderful writer and critic, suggested that in second books “we see poets more consciously acknowledging and wielding their obsessions,” and that rings true to me here. And by definition, obsessions are a form of haunting, aren’t they?

Bsided: You seem to be able to tread the road between pathological fear of development (as in your poem, “Still Life with Copper Creek & the Unabomber”) and the dangerous path of overdevelopment (as in the poem, “April & the Iron Eaters: Berkeley Pit: Butte”). Given both points of view, could I ask what you make of our future as a species?

Williamson: I fluctuate between horror and hope. The book focuses on exploring the impacts of our immense greed-hunger and our blindness to it, and that makes for some dark subject matter.  But poems tend to be the way I explore such things, and my own outlook is at least marginally more optimistic. I have taught freshman composition at several colleges for the last decade, and I have noticed, in the past year or two, such a pronounced uptick in students writing about issues like climate change, damage to our oceans, the fires in the Amazon, endangered species, implementing a compost program at the college, etc., all of which gives me much hope. For the last year, I’ve also worked as an educator in Yellowstone National Park, which is emblematic of so many of the ways we’ve changed our behaviors and perspectives and found more scientific and productive ways to treat the land and our fellow beings. Of course, some of those ongoing struggles are more vivid here, as well. I don’t think greed and exploitation and narrow-minded destruction are going away; I can only hope there are visions and voices that see the impact of those forces and can help us move away from them. And that there is still time for such things.

Bsided: “Science Lesson” has a winsome voice, yet asks a serious question about mythmaking as the persona, Julia, feels foolish for holding on to her own myths about the moon. Do you recall a similar moment in your life when you had to leave behind a myth in order to accept the science?

Williamson: Oh, what a wonderful question! I think our whole lives, if we’re paying attention, are something of a shedding and accumulating of myth. We abandon myths we as we grow and learn, I think; many are about fairness and freedom and our own power, as Julia recognizes in the poem. In some sense, this book documents my own reconciliation with shedding off of the Great Myth of the West, of ownership and development as inherently good and necessary. I think we’ve all been taught the most powerful myth of all: that we can behave anthropocentrically in the Anthropocene indefinitely. That, too, is a vast myth at which the book hopes to chip away.

Risa Denenberg lives on the Olympic peninsula in Washington state where she works as a nurse practitioner. She is a co-founder and editor at Headmistress Press, curator at The Poetry Café, and has published three full length collections of poetry, most recently, slight faith (MoonPath Press, 2018). https://risadenenberg.com & https://thepoetrycafe.online

Support Broadsided! Support local bookstores!  We’ve created a shelf of books we’ve reviewed at Bookshop.org. By purchasing books through this link, you are helping foster literature in your community. 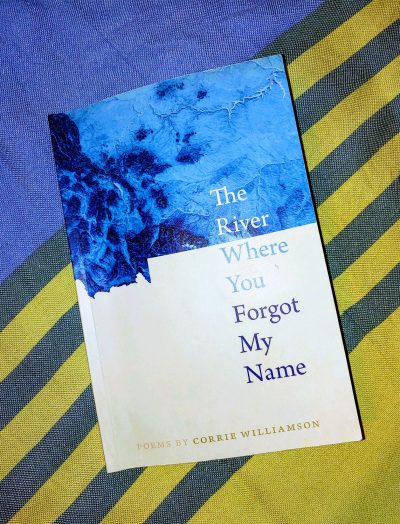