Luiza Flynn-Goodlett’s new collection, Look Alive, is unabashedly queer and Southern. In these poems, we learn much about origins and escape hatches, both of which come with their own baggage. Flynn-Goodlet’s speaker alludes to escaping an inescapable childhood by way of her uncanny ability as a poet to view the present from the past and to view the past from the future.

In “Things I Could Tell You About Onions,” the newborn speaker says, “I came out teeth first, took an apron string / in my mouth.” And in “Before the Body,” the adolescent teenager says:

We weren’t yet homely—no one had noted
if baby fat melted off or took up residence,
whether we’d grown into our noses.

In “Tell,” which starts with “In the end,” the speaker presages her future (as if from the grave), with what she couldn’t say to her family in life: “As coal, we’ll scratch down / what we’d always meant to say.”  Perhaps the speaker meant to say “no” to abuse and “yes” to her emerging identity.

There is a softness in these poems even as the speaker alludes to violent memories. In “Against Forgiveness,” the speaker admonishes a society that favors letting go of past trauma. To Flynn-Goodlett, letting go equals “forgive and forget.” And, in her poems, forgiveness is akin to abandoning the victim:

It’s just that here,
treading water, is the child
you were, skin he unzipped

you from. Sole visitor, you
can’t leave her where she was
flung ages ago. She may find

handholds in moss, climb
skyward, or drown gagging,
but you must sit, witness it.

Yet not all trauma can be held. Those memories of girls at the edge of puberty—that age when we (and by we, I mean me) are not even sure we understand what is happening (what do they/we know? What do they/we hold?)—in that haze of wrangling with truth, so much else is also lost. In “Memory Loss,” such complications are acknowledged:

I struggle to name cousins,
huge swaths redacted by the hand that
shoved a small head toward his zipper.

In “Spring in Laramie,” which chronicles a trip to the spot where the young, gay Matthew Shepard was beaten, tortured, and left to die in Wyoming on the night of October 6, 1998, the site is signified by “loops of barbed wire” and “the prairie, abloom with bruises / both faded and freshly made” Flynn-Goodlett shows what lingers physically on a site and recalls its violent past, rather than retelling the violence. And this helps us hold such a moment as ever-present.

Later, in “Rage,” Flynn-Goodlet personifies an emotion signifying any number of untold events:

It won’t be tamed and flown, hawk-like
shadow scattering mice, yet I’m fond of
where it first entered—

can’t count
the times we felt a body open to

pleasure, those noises it makes
like nothing you’ve ever heard.

In the first poem, Flynn-Goodlett reflects back on a time when so much hadn’t yet happened and the past could almost be viewed with nostalgia, as “Red-throated hummingbirds spar above.” In this poem, “The dogs are still alive,” and “no one got fed up, / loaded the shotgun.” But ominous events are about to accrue, and the language becomes more acrid:

Father’s heart doesn’t
yet float on a pillow of fat. The miscarriage
is years off. Summers, we bleach hair with
lemon, are warm as gold on skin, haven’t
glimpsed the shapes we’ll be hammered in.

The last poem, “(The Sublime Before) Is Someone’s After” recalls stories of what came before the speaker was born, inevitably shaping her from the beginning—a rewriting of the “looking back” initial poem from an unwitnessed, but powerfully tarnishing, past:

One uncle, drunk, drove off a bridge. Her
mother, pregnant nine times, had seven
children;

Her pelvis, crushed under
a semi, tilted the cervical cap, so the first
of us was a happy accident.

Finally this look-back describes the process of erasure that time unfolds:

How remarkable
then, the veil—Queen Anne’s lace, deer-cut
paths to the woods, periwinkles adorning
creek beds—drawn over all that.

In “Think Well of Us,” published at Broadsided, there is a balancing act where survival—that is, wanting to survive—allows for a grim reckoning, where the speaker admits, “we rats fled this ship / before it sank,” but also “caught ourselves / kissed the top of your head in / the carrier.” This poem is emblematic of a life’s summation.

Bsided: In the poem “Think Well of Us,” the speaker says to a future progeny in the baby carrier, “I know we can’t / leave you here. But we will.” This is a poem that considers, then rejects, hope. Yet in your interview with Douglas Culhane, whose art depicts rats fleeing the ship, you say, “The parent almost falling and then kissing the child on the head is what comes to mind when I think of the poem.” Can you describe the balancing act between “we’re all rats” and that “rare moment of grace” that you are reaching for in your poetry?

Luiza Flynn-Goodlett: So, this was originally dedicated to my niece, and came out of an understanding that by the time the consequences my generation’s choices made are fully felt, we’ll be long gone, but my niece will still be here to deal with them. So, I think the poem is trying to acknowledge the futility of hope, while still depicting the complex tenderness that parents feel for their children—they can’t protect them from the horrors of the world they chose to birth them into, but they want to.

Bsided: The artwork on the cover of Look Alive imparts a twofold meaning to the title. The (wo)manikin with the skull wig is terrifying to behold. How did you come across the artist, Winnie Truong, and decide on this art for your cover?

LFG: I’m actually not sure when I first encountered Winnie Truong—I’ve been a huge fan for a while! She has a whole series of these hair-skull portraits, and her work with paper is also really incredible. To me, the hair is an ornate up-do, and the skull has somehow just appeared in it. So, it represents the idea of looking toward life, while death is always one step behind, breathing down your neck. That’s the paradox of mortal existence—we are as deeply within death as we are within life.

Bsided: In your chapbook, Tender Age, there are many finely-hewn descriptions of sharply narrated events. In Look Alive, the poems seem to show detailed, intimate descriptions, but without a linear narrative. Can you talk about how the role of the narrative line has evolved in your writing?

LFG: I guess it’s more that my work comes in waves. There will be a wave of what I consider more direct, plainspoken work; and then, the following wave will be more imagistic. Tender Age was part of a straightforward wave, and I actually wrote it coming off of the poems from Look Alive, so they were accepted for publication around the same time. After that, there was another more imagistic, dreamy wave of poems, and those begin my second full-length collection, which I’m working on now. Of course, there’s also these strange chapbook-length narrative projects—like The Undead and Shadow Box—and I guess that’s a whole third type of wave!

All of this variety used to make me think that I didn’t know who I was as a writer, but now I see that these are the unique parts of my artistic self, and they simply claim expression at different times. And it definitely keeps things interesting, since I never know what’s coming next.

Risa Denenberg lives on the Olympic peninsula in Washington state where she works as a nurse practitioner. She is a co-founder and editor at Headmistress Press and curator at The Poetry Café Online. She has published seven collections of poetry, most recently the full length collection, slight faith (MoonPath Press, 2018) and the chapbook, Posthuman, finalist in the Floating Bridge 2020 chapbook competition. Headmistress Press published Flynn-Goodlett’s prizewinning chapbook, Tender Age. 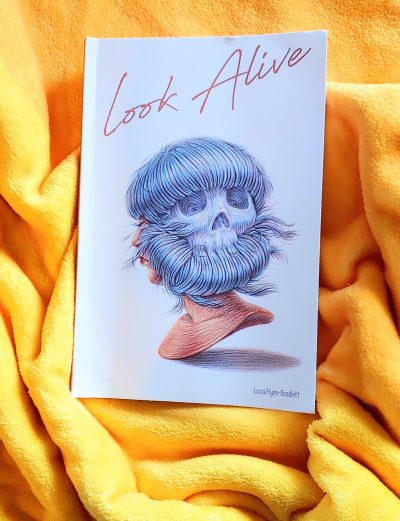