How does a perfectly clear image retain a sense of mystery? This was the question I puzzled over as I read Chloe Honum’s The Lantern Room, her third poetry collection. I returned, again and again, to the poem “Nightfall in Spring,” first published in American Literary Review, which typifies what I think of as the “visible mystery” of Honum’s images. They appear clear as a spring-fed stream, but upon closer inspection reveal hidden pockets of opacity gesturing toward an unknown at the center of what is felt.

In “Nightfall in Spring,” the speaker’s mother kneels in the garden at night to cut herbs as the garden comes alive around her. But the garden is smudged and besmirched with waste from a neighbor’s incinerator: “Black flecks of newspaper settled / across the violets.” And the poem hints at a slow contamination of the garden, the mother, and the poem. It is this hint of contamination, coupled with the matter-of-fact past tense of the poem, that contributes to the mystery at the heart of the piece, as if the speaker examines a memory and finds it both fixed and in flux, unable to be revisited (the speaker’s mother has died) and seething with still-hidden portents: “a praying mantis / extended its lines, the green text of its body becoming an elegant, / indecipherable sentence, […]”

Two more declarative turns in the poem reveal those hidden pockets of mystery. “She was addicted to downers, her mind a loom, its fabric the weather / of spring,” the eighth line quietly admits. And later, remarking on the wasps building a nest near the mailbox: “It was their night as much as it was ours. / The dew on her feet. The shudder of their long, red wings.” These declarations hint at fixed conditions, but their certainty is belied by the strangeness of their assertions. The mother and the wasps are parallel architects, building their secretive, unknowable worlds.

Reading “Nightfall in Spring,” I felt pleasingly off-balance, as I often do when a friend announces something strange or shocking in passing and I spend the next few beats of the conversation struggling to adjust: did the speaker just say that her mother was an addict? Did she just compare her mother to a wasp? This poem epitomizes the tone Honum strives for in the book, as well as the revelatory work her speaker undertakes of revealing memory’s paradox: that it is fixed, that it is somehow continuously being remade in our minds. What a beautiful, perfectly modulated tone Honum achieves in this piece, and the collection as a whole.

It’s easy to read autobiography into the subject matter here—grief, a stay in an outpatient psychiatric program, a mother’s death. But Honum warns against this in a note at the back of the book, saying that the speaker of these poems “is not identical to myself” and that the poems “may draw from archetype and imagination.” And so, as a reader, the mystery deepens to thrilling effect. Signs and portents abound and readers are invited to consider the shifting relationship of the text’s subjects, one to another. Honum’s speaker says of a group therapy session the speaker attends:

In any group, I want to know: Who’s the mother? The boy with
the injured body, he’s the angel. The Vietnam vet is the son. […]
Now that I see a family, I can breathe. […]

Can we see grief as a series of lonely hotel rooms a speaker might need to pass through—singing, singing, on an Orphean quest to retrieve the shade of a long-dead mother, and a sense of self scattered in the wind with her death? Honum’s subjects, both the inanimate (the seasons, the garden, the weather) and animate (a beloved dog, a woman viewed from afar, mothers, daughters, patients in the day ward of the psychiatric unit), arrange and rearrange throughout the text, revealing new facets of themselves in relationship to one another. Dusk may have a different cast viewed in the light of anticipated loss. A memory shimmers with new meaning after the death of a loved one. Readers are invited to consider: how do we track the effect of a long-ago grief on the present? There are no answers in the poems, only questions considered from new angles and new images:

I am no closer to knowing

and it will be twenty-one
years in July.

then the poem dissolves into another portent:

Nevertheless, all day
the bees glow
gold in the gloom,

working up and down
an ivy-covered brick wall,
as if trying to lift it.

To alter what is unalterable, fixed, immovable—that is this collection’s thrilling, devastating task.

Bsided: Your images of the natural world are so striking here, and I saw hints of Brigit Pegeen Kelly as I read (I’m thinking of a lot of her images of the natural world, which have hints of beauty, mystery, and at times, the monstrous—your bees in “Elegy with Cannons and Bees” reminded me of the bees in “The Dragon,” for example) and at times, Sylvia Plath (sentient flowers). I wondered who your poetic influences are, particularly in regard to image-making?

CH: Thank you so much, Katie. I love both Brigit Pegeen Kelly and Sylvia Plath (sentient flowers!). In regard to image-making, I’d say two central influences have been Marie Howe and Henri Cole. Howe’s poems hold such space for the physical world. Her work teaches me to trust in the actual and in the sensory just as it is. In Cole’s poems, I love the imaginative leaps he makes in describing things, often through simile. His similes are often unexpected and wild, yet also immediate and precise—a combination I really admire.

Bsided: There are some insect familiars throughout the text such as the luna moth and the praying mantis. Can you speak a little about what drew you to these two weirdos of the insect world?

CH: I love the phrase “insect familiars.” I think I was drawn to their strange rhythms. I also found them centering somehow, something to describe and build a shape around or through, which can be so helpful when the themes of a poem feel very vast or ungraspable. I like how noticing an insect and what it’s doing can slow things down and maybe even bring things into a different kind of focus.

Bsided: There are landscapes throughout the text that become almost like characters in the book. Spring starts to seem like a country unto itself (a recurring theme for you—your broadside “Spring” is featured in our anthology!); the day program at psychiatric ward; a series of lonely hotel rooms; the garden. How does place factor into your writing process?

CH: Well, sometimes I think about how our individual physiologies can impact our aesthetic awareness. My vestibulo-ocular reflex is a bit off, for instance, so I can get dizzy easily. I have little steadying techniques I do, and I think some of those have carried over into my writing. I like to know where I am in time and place. Sometimes a small detail can do it—just a glimpse of the weather or a mention of the time of day. But both in writing a poem and in sequencing a collection, I do tend to strive to feel oriented in the landscape in some way. Also, with The Lantern Room, I wanted the journey of the seasons to be important—as you say, like a character in the book—and their physical presence to be felt as intertwined with the happenings in the poems.

Thank you for these wonderful questions and insights, Katie.

Katie Schmid’s book, Nowhere, was released in August 2021 from the University of New Mexico Press. Her reviews have appeared in Harvard Review and Connotation Press. 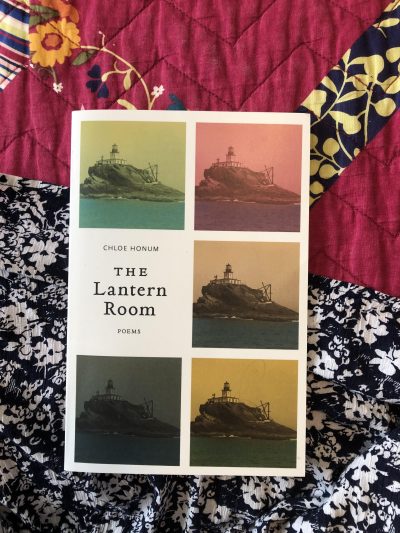