A transformer is something that can change an electrical current. Transformers lower the pressure of electricity for daily use so it can light your lamps and keep your refrigerator humming. They also boost electricity so that it can travel long distances, from desert solar panels to far-away cities, without losing power.

The poems in Kathleen Winter’s 2020 collection Transformer, too, shift the flow of power between the inside and outside worlds. Some ratchet up the electricity of domestic moments, turning the home into a place of tension instead of comfort. Others take their energy to places near and far, illuminating new landscapes and moments from the inside out. Transformer follows two previous award-winning collections by Winter: I will not kick my friends (2018) and Nostalgia for the Criminal Past (2012).

The collection opens with “South Huntington Apartments,” in which someone is hiding in the laundry room, a moment which might seem innocuous but actually holds danger:

. . . You could see his shoes through the strip
between hinges, high-tops that looked innocent even
when he kicked you. Rounded rubber
at the toes is stiff, can bruise a shin, thigh
–hell, what’s not soft enough to blacken
when you’re twenty-four.

Winter uses the second-person here and elsewhere in Transformer to elevate both the moment and increase the charge of the poem. This perspective creates an embodied sensation of threat that feels like an internal electricity, a breathlessness. This feeling returns in “The Knife,” where the reader is thrust into a tense moment in a kitchen: “what on Earth, what the hell / were you doing / holding the widest knife from the kitchen drawer.”

These two poems begin in fear, but as they move forward, the energy shifts toward giving power to the person experiencing the terror. As “The Knife” concludes, the question asked at its opening has the beginnings of an answer: “you’d stared at [the knife] too: you weren’t sure.” And for the woman hiding in “South Huntington Apartments,” as her threat retreats, she gains new agency:

.. . . Three flights up
he sprints but you just need to gain one floor to leave.
You just need one story
and it isn’t his.

The collection itself, too, makes this same journey—moving through high-voltage moments and arriving at a place where each poem holds only the power it needs: no more, no less.

In an interview with Hayden’s Ferry Review, Winter talks about the importance of place throughout the poems. In poems like “South Huntington Apartments” and “The Knife,” these intimate spaces are meant to be confining. “Women who experience domestic violence are likely to be isolated in their homes by their abusers, to be separated from other family and friends,” Winter says in the interview.

As the collection continues, Winter’s alternating currents travel over long distances, both in her memory and across landscapes, from Cambridge Elementary to Colorado, Provence, and the ancient land of the Pazyryk. In “City Eye Elegy,” the speaker travels across a bridge into San Francisco and moves forward and backward in time, from the painless, perhaps timeless heaven of a dead lover to herself as a girl:

That was in a little city
three careers away,
place of too many grapes.

Now I’m in the park
with a windmill, Ocean Beach,
home to fragile baby buffalo
who panic in their pasture
when the smaller dog digs in . . .

This poem telescopes from the past to the fragility and pleasure of the present. Winters turns each facet of a moment toward the light and it triggers a change in how the reader might see the word/world. Time is measured in careers; place in fruit. The windmill of the present is in motion. It spins the speaker forward until she walks toward the water and sees a historic building, which is both absent and present, crossing over a bridge of time. Time is transformed; memory is a transformer.

In this collection, Winter transforms fears, big and small, into a different kind of power.  In the final poem of the collection, which is set under “the porch roof’s sky-blue ceiling,” Winter turns to the undercurrents that come to the surface at night—“fear of little breaches . . . fear of trivial experience, waste of the unknown / quantity of summer nights”—that run through all of us. The poem connects the expansive with the ordinary, from the porch roof ceiling painted to look like the sky to the gravel pathway, which, like this reader, is looking to be moved. Her poems find a way to move energy, electricity, and the charge of things.

And Winter’s writing changes us into people who can be:

old as I am
still dumb, why
won’t I say it: the key is hidden always someplace

This kind of paying attention is the energy we need to transform us into what we could become. Whether we’re free to travel to far-away places, or confined to home and the landscape of memory, Winter’s work suggest that change is both electric and possible.

Bsided: I love your poem “Glitter Factory”—I had read several stories about glitter factories and the secrets they hold and was fascinated by them, and this poem captures some of the ominousness behind this seemingly light and playful substance. I found that in a lot of the poems in this collection, too—an interplay between what we might see as innocent or even comforting and something darker. Is this something you think about as you write, or is it something that emerges with the poem? What’s important about these kinds of contrasts for you?

KW: I was delighted Broadsided chose to publish “Glitter Factory,” as it was a fun poem to write and thus a favorite of mine. The poem was inspired by a great article in The New York Times by Caity Weaver that showed me the dark side of glitter—I had no inkling it was such a nasty substance. I enjoyed glitter a lot more before I read that piece! Your question about whether I’m generally attuned to an interplay between innocence and danger is something no one’s asked me before. It’s not a tension I was conscious of highlighting frequently, but I’ll be more awake to that going forward. Contrast, tension, and imbalance are elements that do tend to make writing more engaging and alive to me.

Bsided: I’ve been interested in how people put together collections. I see lots of threads among these poems—place, home, time, dogs (yay!), men and women in relationship, and movement. I’m wondering what guiding forces you used to shape this collection? What electrifies them as a whole? (And I did wonder—were you thinking about electric current metaphors related to the title, or am I imposing that on Transformer?)

KW: Electrical currents were very much in mind as I put the book together. My original cover idea was the famous photo of Tesla sitting in a chair reading in front of a transformer that seems to be exploding ferociously overhead, but that image was too expensive. Meanwhile I’d fallen for the painting by Fred Tomaselli, which for me, sizzles with energy. I hope to eventually write well enough to pull off an entire dog book, but for now I have to ration the dog poems. Transformer is shaped by a set of thematic interests you’ve identified, as well as my longstanding preferences for formal variety, innovation, and concision. The energy comes from sound, both rhythmically and tonally.

Bsided: The forms of the poems on the page are so varied—from couplets to the space-filled lines of “to straddle is to be” and to the stanzas of “on edge in L.A.” that create their own teetering edges. But all these forms fall together beautifully, even though I can’t figure out how this is happening. How do you determine a poem’s form and then bring these forms together?

KW: Perhaps, like me, you can be easily bored and thus appreciate loads of formal variety? Not everyone does—think of all the superb collections that feature a consistent form throughout. The longest streak of consistency I’ve ever managed was a double crown of sonnets, but presently I like to mix it up. When I write early drafts, I tend to focus on line breaks and diction, not too much on the structure of stanzas, or whitespace, or fragmentation (a technique I used rather a lot in my second book, I will not kick my friends). As the ideas and language start to settle, usually after several longhand drafts, I type up the poem and start to play with how it wants to be organized on the page. My goal is to have structural choices amplify or enrich the ideas and/or sonic or emotional impacts of the poem.

Cameron Walker is a writer in California. Her essay collection, Points of Light, is forthcoming from Hidden River Press. 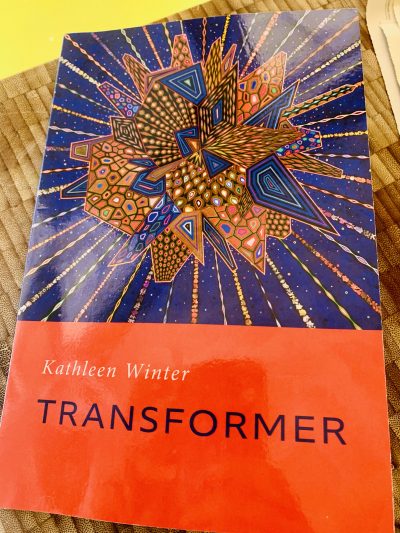