I’ve owned a hard copy of Elegy by Mary Jo Bang for many years, and have returned to it often during my own flareups of grief. Written as a journal during the year following her son’s death at age 37, it performs grief’s relentlessness and a survivor’s efforts to acknowledge the death while at the same time reincarnate the one who died. In real time, month by month, Bang conveys the experience of arriving at the place where she started—unconsoled. In the final lines of the final poem, “Visiting,” Bang laments:

The ordeal comes
To its periodic end

Which simply means
The ahead is again.

The death of a child is unimaginable to those of us who have not experienced it. Yet every death that touches us cracks open all the questions, large and minute, of life’s meaning while it sets the mourner apart from ordinary time. The ritual of condolences—well-meaning others who find nothing useful to say. The ritual gathering that doesn’t offer a sense of closure. The anniversary to face and overcome as the world has gone on about its business of living. In Elegy, the bereaved travels through her son’s apartment, the morgue, and locations that spark memories of his childhood. Only a box of cremated ashes connects her to the fact she must go on living without him.

There is the before, in which the loved one never existed, and the after, “After which a loved one could no longer be.” There are long stretches of time in which daily existence is no more than keening against unbearable loss. In “Once” Bang laments:

Now Now is a terrible ongoing and some-
Times I consider the alternative. Yes,
The x on the ash box says,
I know what you mean.

Bang feels the inexorable passage of time but also its mysterious doings. In “Ode to History,” she ponders “where would they be” if there had never been a pregnancy, a birth, a son:

Then in “September Is,” feelings and associations converge, become richer and more complex. Bang amends grief into remorse and remorse into complaint: “Praises to you for being / One great box of surprises.”

Reading Elegy again, after a time, I am struck by its craft, its stubborn lyricism, its exacting pacing, its metaphors and myths. Bang never states directly whether her son’s death was a suicide or perhaps an accident, giving the reader a profound sense of Why? And how? There is a formal sense of privacy and restraint within these poems which serves them well, taking the reader into sensations, memories, observations, and connections within a lived reality, rather than a chronicle of events.

Bsided: I don’t think anyone who hasn’t had the experience of losing a child can possibly fathom its impact. Still, so much of Elegy feels familiar to me and to other readers who mourn our own losses. I wonder if, when you were writing these poems from a very private place, you knew how much they would resonate with readers?

Mary Jo Bang: No, I didn’t realize that these very private poems would have so much meaning for others. It surprised me, and keeps surprising me. I was writing the poems to temporarily distract myself from a monumental pain, although, each time I stopped and read what I’d written, the poem would bring me back to the very thing I’d hoped to escape. But to not distract myself was too painful, so I kept doing it.

I wasn’t thinking at that point about publishing the poems, but even so, I kept arguing with myself about writing so directly about a personal experience. This because I had convinced myself earlier in my writing life that indirection was the better part of art. Then one day, I realized that what I was doing was writing elegies and I saw that there was a long line of others before me, stretching back I’m sure to the beginning of writing. I could see how strong the impulse was to recreate the loved one, to bring them back if only for this brief moment. I could also see how futile the attempt was, because there was no bringing the dead back to life. Perhaps that’s where the poem becomes a more general signifier, something many can relate to. Because who hasn’t found it difficult to let go of someone or something?

Bsided:  I am struck by the way the poems in Elegy follow the calendar, a year of grief. “January Elegy,” (the poem chosen by Broadsided Press and paired with art work by Joel Haber), includes these lines:

A year in tatters is interrupted by the thought

That the future is manacled
To the indefatigable now of February.
Still as the knife-girl strapped to the circle spinning,

The image of the knife girl strapped and spinning is so evocative. And in “February Elegy” there is the image of a “circus tent,” and “the girl in red sequins on the front of a card selling love.” Can you say how these images came to you?

MJB: The February image, also referenced in the January poem, came from a Valentine’s card, so, “a card selling love.” I don’t remember how I came to have the card, whether I received it or only saw it somewhere, but it touched me: that circus act where a woman is attached to a spinning circle at which a man throws knives. It seems the perfect breathtaking metaphor for love and the risk of pain and loss that comes with it. There was a boy on the card too, in a black satin shirt, the knife thrower. The girl had actual sequins sewn to the image. Valentines embody our romantic notions about love, especially that it’s a charm that keeps working. The protagonists are always young and adorable. On the card, they’ll remain that way forever.

Bsided: In Elegy, you have provided readers with a mapping for the act of grief, but also an explication for how we use (and misuse) the terms elegy, tragedy, and anniversary. Because so much of what is said to the bereaved following a tragic death is often not helpful, I wonder if you remember any words offered to you during the year following your son’s death that were compassionate and helpful.

MJB: I remember finding it odd that every stranger who spoke to me—at the funeral home, at the borough office where I had to file for a death certificate, anywhere where someone knew this death had occurred—used the exact same phrase, “I’m sorry for your loss.” Oddly, I wasn’t familiar with the phrase but it seemed that everyone else in America had been taught to say these exact words—as if I’d missed school the day we’d had that lesson! Because it was so agreed-upon, and because I was hearing it over and over, it forced me to keep thinking about what an interesting way to address this vast absence, as a “loss.” I also wondered how that came to be the “thing to say” and wondered whether in the past, there had been other common verbal gestures. I didn’t find it helpful or non-helpful, but the commonality of it seems almost strange. The fact that I hadn’t heard it made me aware that until then, I’d never “lost” someone this important to me.

Bsided: The sense of regret is palpable in these poems.  In the poem “You Were You Are Elegy” you follow the line “The year. Everything Was My Fault,” with

…I think you
Have forgiven me. You keep
Putting your hand on my Shoulder
When I am crying.
Thank you for that.

Do you think that the burden of holding on to regret is a price paid for the “ineffable sense / Of continuance,” that you arrived at in this poem?

MJB: I’ve met others who have lost family members and experienced this same sense that if only I’d done X, Y’s death wouldn’t have happened. I have a friend who was thirteen when her father died while he was taking a nap. Because she had walked by the open door while he was sleeping, she was left with this same “if only” feeling. I think it’s inevitable with children because most parents do devote themselves to caring for their child—and if there’s a disaster, the temptation is to feel that one failed to prevent it. But not every disaster is preventable. The fact is, we don’t have control over the lives of others. For most of us, that is a very a difficult truth.

Risa Denenberg lives on the Olympic peninsula in Washington state where she works as a nurse practitioner. She is a co-founder and editor at Headmistress Press, curator at The Poetry Café, and has published three full length collections of poetry, most recently, slight faith (MoonPath Press, 2018). https://risadenenberg.com & https://thepoetrycafe.online 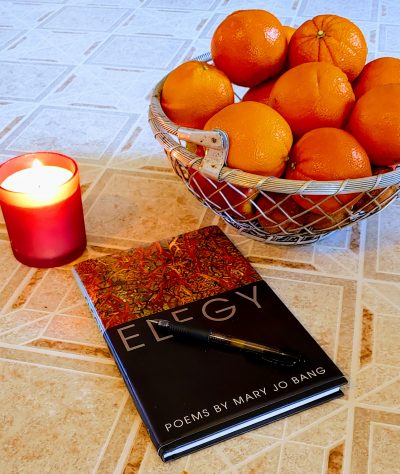