In Territory of Dawn, Eunice Odio juxtaposes intimacy and urgency so closely that the two often become synonymous. She pairs moments of joy with uncertainty, sadness with determination.

Born in San Jose, in 1919, Eunice Odio became one of Costa Rica’s most well-known poets of the twentieth century. Like other poets of her era, she traveled extensively, visiting Guatemala, Nicaragua, Cuba, among other places, and she eventually passed away in Mexico City in 1974. Despite her high regard in Costa Rica, English translators have only begun translating her books in the past decade. First, in 2013, with The Fire’s Journey (originally published in 1957). And in 2016 her collected poems, Territorio del alba y otros poemas, which was published posthumously in 1974, became available for the first time as an English translation, Territory of Dawn.

Translators Keith Ekiss, Sonia P. Ticas, and Mauricio Espinoza retain Odio’s juxtaposition of emotions from the original Spanish, reflecting the way in which Odio elevates what might otherwise be called “love poems” into a refreshingly complex style. Where there is longing in Odio’s voice, there is also power. In “Dream Possession,” the speaker begins:

I will devour you with joy.
You will dream of me tonight.

The phrase “I will devour you with joy” is repeated in the poem “The Husband Sings to His Love.” In its first iteration, the speaker seems to address a man—“Because you are beautiful/my brother/my eternal sweetness”—and in the second, a male persona seems to adopt it. This shared expression of intimacy is peppered, in both instances, with expressions of power, possession, and even domination:

Your body will end
where the hour of its fertility and agony
begins for me.

Odio’s uses of the body throughout Territory of Dawn constantly reestablishes tensions that seem inherent in intimacy itself. Here, Odio looks to the “ends” of the body, foregrounding its limits, and subtly hinting at mortality. In these moments, the limits of the body as a source of pleasure, grief, fear, and loss are highlighted, often through enjambment and the speaker’s short lines. Even the title, Territory of Dawn, brings the body of a place—territory—to the forces that shape the way that place appears—time of day:

Many of the poems are framed as stories or scenes. The collection is populated with women looking for something—themselves, self-assessment, self-acceptance. One example, “If I Could Open My Thick Flower,” reveals a speaker isolated in her own home. Another, “Reception for a Friend on His Arrival in Panama,” features a speaker who follows and imagines the friend referenced in the title. These narrative setups quickly turn toward the lyrical, moving out of their given scenes and into spaces of reflection and imagination, leaving the “ends” of the body and exploring the body, imagined as much as it is felt.

In “Suite of the Illuminated Ballerina,” the speaker is pulled between the sensation of being a performer—“The high copper listens to her” and “Everything hears her, sees her,/the grove senses her weight”—and the sensation of performance itself, as imagined: “The roses organize the space/her foot will occupy.”

In Odio’s poetry, when the body encounters its limits, the speaker elevates corporeal experience to the metaphorical, the imagined. Where there is frustration, isolation, and absence, the speaker pushes beyond these limits and finds, through sensory and often intimate imagination, a kind of freedom.

Bsided: You’ve translated Eunice Odio’s poems before, for Broadsided for instance. What draws you to her work?

Ekiss: I started getting interested in Costa Rican literature about 20 years ago after I visited the country with a friend. I had trouble finding any Costa Rican poetry in translation. Eventually, I came across some stunning translations of Odio by the poet Martha Collins. I wanted to read more. After I contacted Collins and learned she wasn’t planning to translate any more of Odio’s poetry, I decided to do it myself. I’m drawn to the intensity of her vision, the vivid and idiosyncratic spiritual world that she makes real.

Bsided: In your introduction to the author in Territory of Dawn, you write that Odio “began by working within the tradition of a prescribed ‘feminine poetics’ centered around domestic themes of childhood and the maternal” but that she soon “began to rebel against this prescription.” Where do you see this rebellion playing out in her style and techniques?

Ekiss: The observation of the “feminine poetics” of Odio’s early poetry came from my co-translator, Sonia Ticas. Sonia was deeply familiar with the writing of Odio’s female peers in mid-20th century Central American poetry, and she understood the pressures to write about a restricted set of topics. Odio’s rebellion against those prescriptions is evident in her first published collection, Los elementos terrestres / Earthly Elements, where the sexual and the spiritual are completely intertwined.

Bsided: Could you speak a little about the role of isolation, travel, and place in Odio’s poetry?

Ekiss: That’s a fascinating question and one without an easy answer. At the literal level, there are moments where she writes about her isolations in poems like “Three Songs of Solitude” and “Memory of My Private Childhood.” Starting with her second collection, many of the poems include the date and place of their composition, such as Nicaragua or Panama. Not Costa Rica. From what I’ve been told, after she was in her late 20s, she never returned to her birth country. But, at a deeper level, a sense of restless solitude is everywhere present in her poetry, especially her epic poem El tránsito de fuego / The Fire’s Journey, which follows the adventures of Ion, the stateless poet as he creates the world through words. Like any poet.

Bsided: In your conversation with collaborating artist Jennifer Moses for your translation of Odio’s poem “Heart with Park and Children” for Broadsided, you wrote that “Odio’s poem seemed more mysterious, more secretive” than your translation. I’m curious what you do about how translation might change what mood is conveyed in a poem’s original language, what you risk losing in translation, and what a translator might bring out.

Ekiss: Mood, or tone, is definitely something you want to carry over from the original to your translation. What often works is to translate a poem slowly. You really need to absorb it before you can bring the poem over into the new language. What you are creating, though, is a new poem in English that’s in a kind of dialogue with the original. The good news is that a translation can never ruin the first poem. One hope of our project with Odio is to lead readers back to the originals. To answer the last part of your question, I think translation can bring new voices into a language and potentially show us things that are missing in our own poetry. Odio doesn’t sound like any English language poet. She’s giving us something new.

Keene Short is a writer in northern Idaho. His work has appeared or is forthcoming in Duende, Split Lip Magazine, Bodega, and elsewhere. Find more at keeneshort.com. 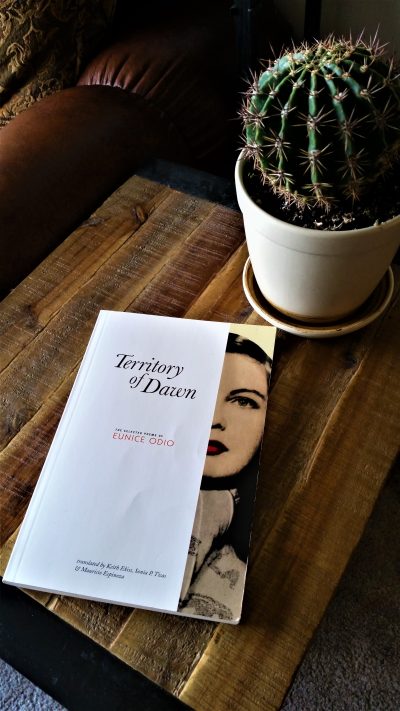