Dungy’s latest collection, Trophic Cascade, examines the language of motherhood, legacy, poetry, and power. This is a book of transformations and transfigurations of the landscape and of the body. “There are people who, when they go, shift / the meaning of words we use each day,” the speaker tells us in “Glacial Erratics.” The poems are woven and balanced expertly and carefully throughout the collection: poems of death and birth; political power and violence; stasis and movement.

Dungy’s title poem, “Trophic Cascade,” is an account of “the reintroduction of gray wolves / to Yellowstone.” Dungy describes the ensuing fecundity in gorgeous, poetic language: “Berries / brought bear, while undergrowth and willows, growing. . . . .” Along with prowess of poetic sounds, Dungy reclaims the language when she commands:

[…] Don’t
you tell me this is not the same as my story. All this
life born from one hungry animal, this whole,
new landscape, the course of the river changed,
I know this. I reintroduced myself to myself, this time
a mother. After which, nothing was ever the same.

The poem, “Notes on what is always with us” examines the slipperiness of the vocabulary of motherhood and the grief so specific to motherhood–the loss of a child. The speaker, at her mother’s birthday party, where “grief came along / with the cake,” notes that three of the mothers there are “bereaved of a child.” Dungy captures the loss of words—how grief can silence, how it can tamp down the heart:

+++++++++++There are things I do not want to say, I said in my journal.
Except the not saying won’t return anything you love.

The boy is dead. The boy’s mother is dead.

I was trying to write about beauty, but grief won’t stay away.

If grief is an agent of silence, so, too, does motherhood affect the art of writing a poem, which is the art of language. Dungy’s repeated use of the “ars poetica” underscores the process of developing words into a poem, which mirrors the development of the embryo. In “Ultrasound,” the speaker promises her unborn child, “I will / wait as your infant tongue will wait, . . .” Six of the poems in the book use ars poetica—art of poetry—in their titles. In “Ars Poetica: Field Trip,” the speaker presents the horrific loss of voice through chickens at a slaughter house. This is a poem about power. “These de-beaked things, they have no fight.” In “Arts Poetica: After the Dam,” Dungy describes the choice not to sing as a response to environmental change. “only that bright-chested bird knows the end of this song / but she is winging over water and must not waste her breath to sing. . . .” The chickens and the bird are birthing creatures. In “Ars Poetica after William Carlos Williams,” Dungy embraces the body that changes to become a mother, even if the writing life of the poet is altered in this role:

If I admire my fingers, their grip,
the muscle in my arm, breasts
full with uncried for milk—

Who is to say I am not
the fortunate creator of my household?

Dungy’s Trophic Cascade is a master lesson in manuscript organization, in the use of space and sounds in a poem, and in writing about language and its movements. Throughout the book, Dungy weaves ten “Frequently Asked Questions” poems. The response to the question “Does she have teeth yet? Does she bite you?“ in “Frequently Asked Questions: #4” are lines of poetry so beautiful, my breath was taken away:

She bites what flesh is offered and always finds more.

These poems, too, confront the legacy of the enslavement and persecution of Black people by white people in the United States. The poem “Brevity,” which is placed in between the “Frequently Asked Questions” poems #7 and #8, is a poem that uses the blank page—the white space—to a shocking effect: this is white violence. The poem is two-pages long, and almost completely empty, except for the two lines:

The poem, though, doesn’t end here. I turned the page to the emptiness, made full by the names of the four girls murdered on Sunday, September 15, 1963, by white supremacist terrorists at the 16th Street Baptist Church. At the bottom of the page, as if a footnote, appears:

The poem is preceded by “Frequently Asked Questions: #7” which answers the question, “Is it difficult to get away from it all once you’ve had a child?“ The speaker, while holding her baby, is confronted by a “black steward,” weeping over their history, “I understand what they did to us. All those women sold away // from their babies.” On the other side of “Brevity” is “Frequently Asked Questions: #8,” a perfectly centered poem, again, surrounded by that awful whiteness:

Were it not for Dungy’s brilliant organization, this poem would be ironic if it stood alone, perhaps even a wry answer one could hear from any overwhelmed mother. These three poems, though, in their order, carry an historical weight of danger, or disempowerment, and enslavement, in their words and their spaces.

I will return to Trophic Cascade because it has taught me about poetry: its creation, its place on the page and in the world—how it, too, is a living thing, how it cascades with “all its vowel sounds,” and that our language, “finally, is all it means / to be alive: to be able to die.”

Bsided: I returned to Trophic Cascade after the pandemic. I’m struck by your prescience in the poem “How Great the Gardens When They Thrive.” I’m looking at the third stanza, especially:

Consider the praise songs we might compose
to antibiotics, immunization, the identification
and near eradication of microscopic organisms
that have blinded, maddened, paralyzed, and killed.

I’m thinking, too, of a line from “Ars Poetica: Mercator Projection,” where the speaker states, “We hadn’t adjusted our perspective yet,” which also speaks to the distortion of that map–the exaggerated size of the North American continent compared to Africa (thus, power/whiteness). Could you talk about the perspective in a book, as in how some poems grow in their ability over time? to haunt us?

CD: I wrote “How Great the Gardens When They Thrive” as a commission for the fiftieth anniversary meeting of the Academic Pediatric Association. Some of the markers of life in post-WWII America were scientific and medical advances in vaccines, as well as national health initiatives that, among other things, led to broader access to health care that included birth control and abortions. All these things drastically decreased the burden of childcare and nursing from individual women, giving them the space to work outside the home and greater access to education, because they did not have to stay home as frequently to care for sick children. Better national health care is part of what caused the shifts in labor force that America witnessed in the 1970s and 1980s and beyond.

I’m not sure I was being prescient (thinking about the future) so much as that I am aware of the past. Perhaps one of the things that allows for the kind of perspective distortion you mention is the fact that I write with an awareness that the past is always right here with us. If we don’t stay vigilante, the past will quickly return to the present, as it did during the COVID-19 pandemic, especially that first year, when women were disproportionately burdened with childcare duties in a way that had not been experienced in this country in more than 50 years.

Bsided: Your accuracy with the language of motherhood is unmatched. I was so moved by the speaker’s friend, Megan, in “Glacial Erratics” when she talks about her dying mother: “I want to kill her, . . .” I could have laughed and cried because of the truth in that moment. But I want to talk about the “wrack of grief” and how it changes language, especially in that poem and in “Last Kiss,” which deals with the deaths of children. Could you talk about your process in trying to capture these un-words?

CD: I’m not sure what you mean by “un-words,” but I’m going to give a stab at an answer to how I deal with the complicated feelings we have around loss and grief. One of the complexities of grief is the way we feel many things at once when we are mourning or anticipating mourning. The anticipation of mourning is a kind of mourning itself. We are already aware of the loss we’re expecting, and we feel the pain as profoundly as we might when the loss is tangible to others. There’s that idea that grief has several stages, but most of us who have experienced grief understand that those stages are never consecutive. They move on us out of order, and sometimes they come all at once. Which means that to write about grief I must find a way to say more than one thing at a time. It’s not like grieving people don’t have the capacity to see or say things that are funny. I want to include that humor in my poems. I want to include blurry nostalgia and clear-sighted unsentimental fact. The word “wrack,” as the poem “Glacial Erratics” suggests, has a lot of meanings, and I tried to work with several of those meanings at once. Such capacious language can be helpful when I’m writing about capacious feeling, because one word gives me access to many emotions and ideas. The words, then, do what our hearts do, point in many directions at once.

Bsided: I love the nearness of the poems “Frequently Asked Questions: #9” and “When bushes periodically burn, children fear other children: girls,” and how both echo with religious references (curse your maker and a burning bush) to address fraught relationships between women. Perhaps an even better example would be the placement of “Frequently Asked Questions: #7,” “Brevity,” and “Frequently Asked Questions: #8” which created such a political and emotional weight—they are all strong poems, but piling trauma, violence, murder, and birth with the blank pages is shocking and true. We often hear about letting poems “speak to each other,” but here, they do this with silence. Could you speak about your organization in this book?

CD: I think organizing manuscripts is incredibly fun. And also very difficult. I love getting student theses and sitting with the individual poems and helping them see how poems speak to each other across an arc. Ada Limón has a great article about ways to think about organizing manuscripts. I think I often think of it like a musical score. I grew up in the age of albums, and so I think of the flow from one “song” to the next. How do we get from here to there without losing tension and traction? And how do we keep being excited and seeing new things along the way? This is one of the most important tasks, I think. Writing the individual poems is important, yes. But putting the poems together with their families is key as well.

Jennifer Martelli’s book, The Queen of Queens, was released in April, 2022, from Bordighera Press. Her reviews have appeared in Diode Poetry and Solstice Literary Magazine. 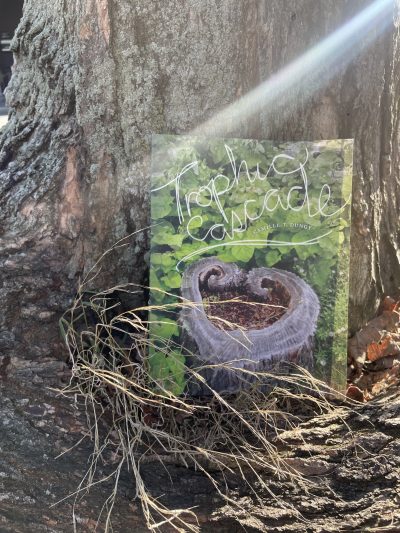