In the first line of “American Goshawk,” the poem that opens G.C. Waldrep’s newest collection, The Earliest Witnesses, the speaker strides into the woods “in a brute faith, certain the forest / would give me what I needed.”  Throughout these luminous poems, I continued to walk alongside the poet, through forests and fields, visiting ancient hillforts and country churches. As we wandered together, it felt to me that we left this certain faith—in the self, in what the landscape would provide—and entered into a more numinous land, filled with questions about what it means to be a witness to both the internal landscape and to the world itself, and what it means to be seen in return.

The path through this collection took me through places and times that felt at once abandoned and full of a steadfast companionship. In “Hephaestus in Norfolk,” the speaker walks through fields of wheat and mustard, past a neglected farmhouse and a broken garden gate. But there, too, are the drone of the sky, the whisper of a voice, the pollen that settles on him, and the scattering rabbits. The poet, and the reader, are alone, yet accompanied – “. . . I am the only remaining witness / I, and the wheat and the mustard, and the scouring sky” – and there’s both a tension and a comfort here in being among one of the only watchers, of feeling like the landscape is turning your gaze both outward, and deeper in.

The interplay of witnessing and being witnessed runs through the collection. Waldrep considers eyes and eye-sight, dreams and dream-sight, returning to these concerns each time with a different lens. The poem “Never-Ending Bells” features a medieval church tower in Devon County, England, called “Peeping Tom,” which seems to appear unexpectedly to viewers in distant places in the local landscape. Waldrep considers the unblinking tower, how it is all sight and bell-tones, but can hear nothing; he wants to climb up into it, “the voyeur’s crystal socket.” It’s more than a daredevil urge—the speaker wants to be immersed in the moment, in the seeing and feeling with “every cell in my body.”

Peeping Tom concealing its peal of five until
the eye, like any other membrane, is spoken-through, becomes
not the perceiver but the medium through which
perception captivates. And I wanted to run there, I
wanted that communion . . .

For me, the mystery of witnessing expands as I walked deeper into the collection. Is a witness simply one who observes, or can this seeing be immersive, something that changes the witness, too?  Can seeing change you enough that you, too, are seen?

And being seen can raise more questions. Glints of humor shine through many of these poems—for me, the biggest smile came from “On Being Mistaken for ‘Part of the Art’ at the Mattress Factory Museum in Pittsburgh.” Three times, people walking into the exhibit come upon the speaker as he sits in a plastic chair in the exhibit; one curses at him, two of them scream. “I eventually fled / because I wearied of warning others in that all-but-darkness / ‘To your left, somebody here.’”

Another poem, “Castle Woods, Dinefwr,” seems like a diptych, as a docent clarifies that an arguing family is not, in fact, part of a permanent display. While reveling in these unusual moments, Waldrep’s poems also seem to ask what we consider to be art—and does witnessing something as art change what we see, and change us, too?

These ideas seem particularly appropriate in a time when many of us are seeing how much we have been blind to, from systemic racism to inequalities revealed by the pandemic. In this collection, the insight is personal, too—Waldrep, who wrote these poems following diagnoses with cancer and with a neurological condition, often turns his gaze to the physical body, its failings and its strengths, its role in sensing the world around us.  Whether looking out or looking in, Waldrep’s poems do not avert their gaze from the abandoned, broken world–or from what other visions can emerge alongside it.

.  .  . Is it broken, I ask myself.
Is it worship. Every century or four someone scrubs
the images from the walls and replaces them with new images.
A fish. A crown. A scythe. . .

Underlying these images, new and old, is a deep vision of connection. Waldrep, a member of the Old Order River Brethren, a religious community, opens the experience of faith to something that can be witnessed by the body. He writes about “the eye,” he explains in “Only Coerce Yourself Gently & Show,” “because you will not accept ‘faith’ / or ‘the soul.’” This faith is something to be experienced—fully, physically—through eyesight, through a walk in the countryside, and through these poems. They make us ready for new images that we can witness, and a new way of witnessing ourselves.

Bsided: “Epithalamion,” your poem that was broadsided in 2006, is traditionally a poem to celebrate a marriage. The poem’s last line—and for me, the idea of the lion, loose in the world—does seem lifted, celebratory. That’s the feeling I have from your poems in The Earliest Witnesses, too: that while we’re grounded in the setting, we’re also drawn up and away, sometimes as observers, sometimes in praise. But that’s just me—are there through-lines that you would draw between “Epithalamion” and your current work?

G.C. Waldrep: “Epithalamion” was written so long ago! In 2004, to be exact. It comes from a long sequence of prose poems—fancies, parables, provocations, experiments—that I’ve tinkered away at ever since. There are, at last check, 559 of them. Occasionally I submit a few to a journal, but I’ve never felt any desire to publish the lot as a book: they are my little private toy shop of glee, the cave in which I hammer things together, I mean for the sake of the hammering. (Sometimes the hammering is its own reward.)

Later, I would have dear friends—four, in fact—who would ask me to write wedding poems for them, and I would fail miserably each time. Perhaps in writing “Epithalamion” I was anticipating my own wedding, which never quite happened.

Praise is another question, the answer to which is, for me, theological. But maybe it’s just another version of the same answer, the lion we want to believe has gotten away.

Bsided: “Epithalamion” has a similar form on the page as several of the poems in The Earliest Witnesses, but there’s also a delightful variety of forms throughout the collection, from the very spare and space-filled poems like the Wordwell series, to the rich, more fable-like prose poems such as “After the Abolition of Horses” (which also brought me back to Epithalamion, with its “scabbed lions of dusk”).   Do you have a sense of what shape a poem will take before it finds its way to the page?

G.C.: Most of my poems achieve some version of their final shape in the first draft, i.e. form comes with and within the act of composition: the two are inextricable. But the poems in the second half of The Earliest Witnesses were troublesome: in revision, I kept cycling the same language through different forms. The two forms that predominated, in the compositional event, were the prose blocks and the indented prose strophes…but some of the poems that appear in one form in the book were written in the other. The argument I made for myself had to do with music, and in particular the breaks (in the strophe-poems): the rests in the music, what role those rests performed. If I couldn’t answer that question to my own satisfaction, they became (or remained) straight prose. If I could answer that question, they retained their pauses, their silences.

Of course lyric prose has its music too, but it’s a music that rarely privileges silence.

Bsided: Walking seems to be an important part of this book and, I’m imagining, your writing process. I’m wondering about the structure of The Earliest Witnesses and the order of the poems as it relates to walking. Was there a sense of motion through the collection as a walk or a journey, or did another guiding force shape its structure?

So there was a sense of motion-through-landscape as my body moved; I was writing in my notebook both as I walked and later, in the evenings. I was also, of course, on some level, responding to texts I was reading. I have always loved walking or hiking—as I have always loved reading—but by 2018 I no longer took walking for granted: I’ve had too many moderate to serious health problems and I walk, when or if I walk, as a diminished being, in a landscape of the body characterized by diminishment. I was in great pain during that 2018 walking, and pain leaves its traces across the book (as it also did across feast gently). What I was hoping, in The Earliest Witnesses, was that the pain would be met, in each poem as in the precipitating events, by wonder.

Cameron Walker is a writer in California. Her essay collection, Points of Light, is forthcoming from Hidden River Press. 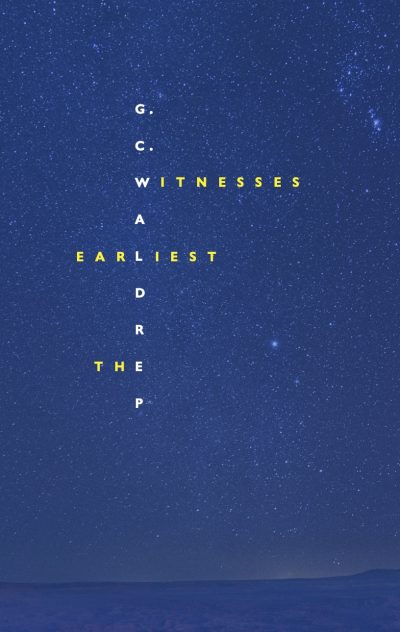