Joan Naviyuk Kane’s Dark Traffic is a brooding, powerful meditation on place and identity. “Look at us as if we live,” she writes, “& inhabit our language / when we can.” Kane’s poems freely move between English, Inupiaq, symbol, and place code.

Kane is an Inupiaq poet, an enrolled member of the King Island Native Community, with family from King Island (Ugiuvak) and Mary’s Igloo (Qawairaq). Her published works include the poetry collections The Cormorant Hunter’s Wife (2009), Hyperboreal (2013), The Straits (2015), Milk Black Carbon (2017), Sublingual (2018), Another Bright Departure (2019) and a collection of essays, A Few Lines in the Manifest (2018). She is a core faculty member of the Institute of American Indian Arts and lives in Cambridge, MA, where she teaches at Harvard and Radcliffe. Yet the landscape of her poems is the Arctic north. Her poems are full of the Arctic sea, its birds and wild mosses and flowers, its floes of ice, and the volcanic terrain of lava where it meets the sea.

In their language-shifting between Inupiaq and English, Kane’s poems reject assimilation. She doesn’t include glossaries, footnotes, or other means by which a nonnative speaker can access the Inupiaq words found in her work.[1] In this way, Kane’s poems assert the right of Inupiaq to be understood as a living language—reader, go forth and research. “Imaq,” a poem written entirely in Inupiaq, initially seems to be written in the shape of a bird; once one understands that the word “Imaq” can be translated to mean “the sea,” the poem changes shape, becoming a field of ice, ripples of melt-holes, a piece of ice broken off from the whole.

One image that repeats throughout the text is

, which is the Phoenician letter Teth, from which the mathematical symbol theta, meaning “unknown angle,” is derived. At times the symbol appears to be a placeholder, or even merely as a visual separation of stanzas. There’s often a sense that the poet’s words themselves are rising from a submerged place, surfacing from a silence as a melt-hole appears in ice. Here and there, both words and blank page are separated by

. The circled X has multiple meanings, but the most enticing to me is taken from physics, as Wikipedia explains: “a vector pointing into the page.”

In the same way, Kane’s poetic images are drawn from the natural world (wild as well as domestic) but also from military and industrial landscapes used and discarded. “White Alice” was the vernacular name for the White Alice Communications System developed to provide long-distance radio communication from the 1950s through the late 1970s, eventually rendered obsolete by satellite technology. Kane has a series of “White Alice” poems placed separately throughout the book, beaconing to one another through the text, like these stations that were once positioned across the remote landscape. Like the dispersed radio stations or their dull background “hums/statics,” the insidious effects of military waste seem undramatic and their causality rarely prominent. The toxic connection between the two does not seem apparent yet: the abandoned military bases given by the place-codes and “while overseer ogles my goiter, my Always Overnight with Wings” or “otterless Otter Lake.”

In “White Alice” poems, place is rendered through the place-codes (FBK – Fairbanks; EDF – Elmendorf Air Force Base) together with scraps of found language, transcription of sound (i.e. the onomatopoetic sassaq of the ticking clocks found within the radio stations), the song of a common bird whose song is transliterated “in a green, green tree,” fragmented observations of broken landscapes, and a scrap taken from a newspaper article interviewing a survivor of the Japanese internment camp located at the Elmendorf Air Force Base from 1940 through 1942. The juxtaposition of the dry, flat place-codes against the vivid sensory experience is itself an inquisition into language and its limits. How does one render the experience of Japanese Americans imprisoned by their own country in World War II? Evoking embodied experience through fractured sensory details opens the reader to question what can be known.

There’s tension here between the poet’s personal experience and the weight of being a representative for her community. In “Rehearsal for Surveying the Ruins,” Kane writes,

Unable to construct a more compassionate narrative,
I have drowned and turned back into myself—
pitiless traveling north against the waves. If,

at the end, I remain paper-thin, I do not want
to hear ceaselessly of it. I no longer circle
the graves of the dead, the ones who exact

so much from the living.

These are poems that are directed to the living. It would be easy, in a time of a rapidly changing climate, to evoke a response of pastoral solastalgia. But these poems confront us with where we live, demanding we take in the world in its brutal entirety. This is found in Kane’s relentless urge to look, listen, to know the names of things; but more than this, it’s the lyric moment at the heart of this collection.

Bsided: At first, I thought “White Alice” might be a reference to Alice in Wonderland! But when I looked it up, of course I found that it referenced the radio communications system put into place in the 1950s that allowed for long-distance communication. While the positive impacts of long-distance communication are rarely questioned, I also wonder about the disruption the easy exchange of information has on local communities, and on local communication. Was that on your mind in these poems which splice language from multiple directions—municipal, newspaper article, natural landscape, the patois of text messages, etc.?

JK: In some ways, yes, I am calling into question the military-industrial practice of these sites having controlled all aural contact with the world outside of many of the arctic and subarctic communities that had White Alice stations in them. But I think I was also concerned with the way in which the towers still mark Anvil Mountain in Nome and the history of this site. I think some of the dynamics still present on social media today. As a poet, especially, I am interested in the associations the poem opens up—as well as the names of the sites and systems themselves.

Bsided: In “The Erasure of the Colonial Shape,” you write, “How many Eskimo words are there for white people?”—a question which seems to me both darkly humorous and rhetorical. “White Alice,” too, uses irony in engaging racial tensions. What is it about dark humor and irony that feels right as a vehicle for addressing colonialism’s legacies in and on Indigenous people?

JK: During the final composition and revision of poems that comprise Dark Traffic, I was reflecting on the deployment of various racial, ethnic, and sexualized slurs that were directed at me especially in academic environments by people that consider(ed) themselves to be sensitive and “woke.” I found that surfacing the diction of these slurs in generally lyric poems was a way for me to begin to unpack some of the legacies you reference above. But irony has to do with double meanings, which means the audience as well as the speakers of poems engage with dissimulation. I think a dynamic I wanted to center was that no matter a reader’s culture, humor is present.

Bsided: In an interview with “Superstition Review,” you said: “Our language is alive. We’re creating new songs and inscribing ourselves into them. Inuit ice and land are still here, and therefore, so is the language.” As the ice vanishes through climate collapse, how are you seeing the impact of this change on language? How is language changing to reflect the new realities we see in the natural world of the Anthropocene?

JK: Tonight one of my children said, “if the ice is gone, no one says ‘ice’ anymore.” While this isn’t necessarily the case, he’s on to something. However, I think of scholars and linguists like Annauk Olin who are working to move the Inupiaq language in a direction that can accommodate the discussion of climate change in Indigenous communities. I think language can fail in catastrophe. But it can also resolve some others.

Bsided: In your 2014 conversation with Broadsided Press about your poem “The Doll (A Pretend Person)” / “Mammaraq (Innuŋŋuuraq)” you said, “A poem opens up language into a lyric moment. A visual response to literature can be the lyric moment made visible.” I kept thinking about this “lyric moment” while reading Dark Traffic, and wondered whether, for you, this opening up of language is an act of destruction? Creation? Or, both?

JK: It can be both, and was for me in this collection. I think the language opened more in this book than any others I have written, and the language left as soon as it could. I think the collection crackles and swells on as if the words were loose gravel or bogs in an earthquake in Alaska. I was working so hard to see the abuse I had been subjected to and subjected myself to during the writing of Dark Traffic. And I think it was beginning the book that made it clear to me that I had to get my sons and myself out of Alaska.

Carolyn Ogburn lives in the Southern Appalachians, within the watershed of the French Broad River, where she does any number of things for love and for money. 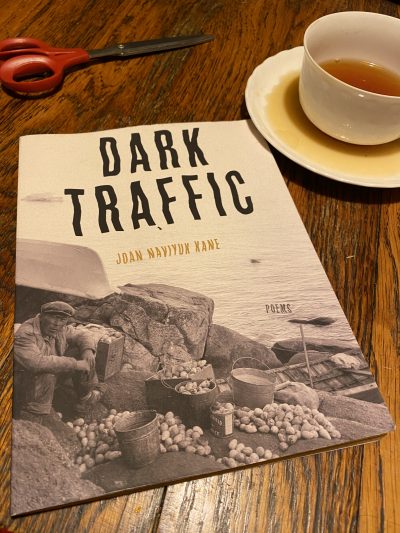