Note: This broadside is part of our annual translation special feature.  This year’s guest editor is Tacey M. Atsitty. We asked her to select two poems—one from a forthcoming publication from Tavern Books, one by a poet writing in a language indigenous to the Americas. We are grateful for her time and vision. Of her choices, she had this to say:

It’s been nearly a decade since I read Anthony K. Webster’s interpretation of the poem by Rex Lee Jim and all these years later it still resonates with me. In Webster’s book Explanations in Navajo Poetry and Poetics, he focuses on the use of ideophones of the poem. He writes, “[The poem] is built up of an onomatopoeia that has productively become a verb  -tsǫǫs  ‘to suck’ and then has been nominalized by the use of a nomilizing enclitic –í  ‘the one’ (99-100). Jim uses onomatopoeia that embodies the mouse itself, impersonating himself (mouse) through sound. I love how sound and language have the ability to create oneself, or a version of oneself. Little did Ritsos know the profundity his poem would have with this little mouse.
—Tacey M. Atsitty

What surprised you about this collaborative piece?
Artist Meghan Keane: I didn’t realize at first how many collaborators were involved! It was a surprise and a pleasure to learn of the involvement of the translator as well as the poet, in addition to the editor selecting the poems for the translation feature.

Why this poem/these poems?
Artist Meghan Keane: I visited Greece for the first time last summer and the experience has yet to leave me. I fell completely in love with the place, the spirit, the language (which I started learning), the way of life, the people, the food, the textiles, the old, the modern, everything one could fall for, even the graffiti covering much of Athens.

Hence, when I saw this, I knew I had work that would be in conversation with it. I made the drawings last year while traveling after becoming little short of obsessed with the folds I was seeing in paintings and sculptures, as well as the undulations and repetitive visual qualities that were in buildings, in nature, in the art and fabric…

I spent a long time making sure the images selected paired meaningfully with the poems. I hope they land for the viewer-reader as resonantly as they did for me. I hope Ritsos would feel the images do justice to his work.

How does translation fit into your creative life?
Translator Paul Merchant: I’ve translated all my life, partly to keep my hand in as a writer when not at work on something of my own, and because writers in Greek, Latin, Modern Greek and even Welsh have been as important to me as writers in English, so I owed it to them to make them available to others without those languages. That four publishers in three countries (Kedros in Athens, Five Seasons in England, and Trask and Tavern in America) have come together on different occasions to give hospitality to a writer is a powerful message about valuing the outsider: an important project in these more insular times.

If this broadside were a piece of music, what would it be?
Translator Paul Merchant: It reminds me of a Bach prelude and fugue for keyboard: a strong elegant statement, followed by a more complex folded and interwoven piece. The line drawings have the same direct impact as a piece for solo performer.
Artist Meghan Keane: Something sharing equally masculine and feminine qualities; Kronos Quartet perhaps, keeping with the theme…

If you had to represent this collaboration in one word, what would it be?
Translator Paul Merchant: Surprise
Artist Meghan Keane: καιρός

Read any good books lately?
Translator Paul Merchant: Walter Benjamin’s Arcades Project and Fernando Pessoa’s The Book of Disquiet are monumental explorations built out of fragments: profound examples attempting to make sense of our fractured modern world, very different from Monochords by Yannis Ritsos, but following the same impulses.
Artist Meghan Keane: I read Death of a Salesman by Arthur Miller for the first time this summer as well as a handful of his essays discussing the play, and I was struck by how relevant and gutting the work feels. That little has changed is the most memorably devastating aspect.

Seen any great art lately?
Translator Paul Merchant: At the Royal Academy in London, an exhibit of objects from Matisse’s studio, alongside the paintings that include these objects: drawing attention to aspects of the painter’s world that can easily be overlooked as accessories, but which are in fact reflections of his tender heart and a tribute to his impeccable eye.
Artist Meghan Keane: I have been looking at a lot of quilts and global textiles lately. These works are great and yet underacknowledged globally, another instance of women artists not receiving appropriate recognition. Very inspiring to spend time with their masterpieces, even if only through books or internet images. 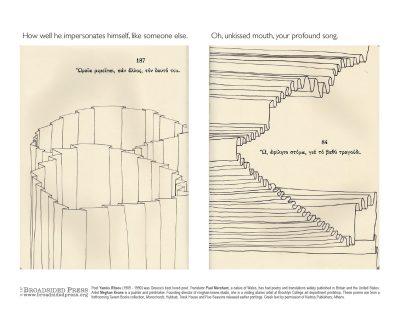 Poet Yannis Ritsos was born in 1909 at Monemvasia in the southern Peloponnesese, into a family marked by disease and early death. He himself was diagnosed with tuberculosis at the age of eighteen. A lifetime communist, his unpretentious, memorable poems were a prominent feature of his active resistance to the German occupation of Greece and to a succession of fascist regimes. They led to the public burning of his lament Epitaphios in 1936 by the Metaxas dictatorship and to his imprisonment during the Civil War from 1948-1952 and again during the 1967 dictatorship of the Colonels. He was transferred from this imprisonment to island exile on Samos when he became dangerously ill, and was allowed to return to Athens and to be published again in 1971. He was awarded the prestigious Lenin Prize in 1975 and received honorary degrees from the universities of Thessaloniki, Birmingham, Leipzig, and Athens. During his highly productive life he worked as an actor, dancer, book editor, calligrapher, and author of over eleven volumes of translations. His more than one hundred volumes divided between long meditations on historical themes and short enigmatic reflections on everyday events have been translated into over forty languages in more than three hundred editions. He also published three volumes of plays and four books of essays. He died in November 1990, aged eighty-one.

Translator Paul Merchant was born in Wales and taught at Warwick University. Since 1988 he has lived in Oregon, where he was Director of the William Stafford Archives. His volumes from Five Seasons Press include Bone from a Stag’s Heart (1988 Poetry Book Society Recommendation), Some Business of Affinity (2006), and Bread & Caviar (2016). His translations from Greek, Modern Greek, Latin and Welsh have been published by Five Seasons, Trask House and Tavern Books.

Artist Meghan Keane is a painter and printmaker. She is the founding director of meghan.keane.studio and a visiting alumni artist at the Brooklyn College art department printshop. She lives and works in Brooklyn, NY.