A group that spans the continent, a group that loves poetry and works as teachers, naturalists, and advocates. We asked them to tell us about themselves, and to also look back on 2014 and share their most memorable moment, be it personal or public.

DAVE BONTA (Winter: Sochi Olympics) is the author of Odes to Tools (Phoenicia Publishing) and Breakdown: Banjo Poems (Seven Kitchens Press) as well as two ongoing daily writing projects: a front-porch microblog called “The Morning Porch,” and erasure poems derived from the Diary of Samuel Pepys posted at the literary blog “Via Negativa.” He’s best known as the editor of Moving Poems, the premiere spot for videopoetry and poetry film on the web. davebonta.com

2014 Memory: Echoes of explosions and machine-gun fire fill the valley on the Cornish coast—sound engineers preparing for that weekend’s commemoration of the British entry into World War I. In a hollow in an ancient beech, my partner and I discover a highly realistic severed arm.

MAUREEN E. DOALLAS is the author of Neruda’s Memoirs: Poems (T.S. Poetry Press, 2011). Her poems can be found at Silver Birch Press (“I Am Waiting” series), Broadsided Press (“Responses: Ebola 2014“), Split This Rock (“Poems that Resist Police Brutality & Demand Racial Justice”), Every Day Poems, The Found Poetry Review (Special David Foster Wallace Edition), The Poetry Storehouse, Escape Into Life, and other online and print publications, including four anthologies and Felder Rushing”s bottle trees. She blogs daily at Writing Without Paper and produces an art column for the online magazine Escape Into Life.

2014 Memory: Without question, my “thing to remember” from 2014 is the suffering in the faces of our children: the 12-year-old Tamir Rice, toy gun in hand, taken down by a police officer in Cleveland, Ohio; the more than 500 Palestinian children under age 17 who were killed in Gaza; the beautiful Yazidi daughters dying of thirst on a stark mountaintop in Iraq; the nearly 2 million Syrian children who became refugees consigned to squalid camps. And then amid the horror, the face of Pakistan’s defiant Malala Yousafzai. To recall even one of these faces is to allow the possibility of hope.

MELISSA FITE JOHNSON (Spring: Nigerian schoolgirls’ kidnapping) received her Master’s in English literature from Pittsburg State University in Kansas. Her poetry has been featured in magazines such as Cave Region Review, The Little Balkans Review, and Inscape Magazine, as well as in the Kansas Notable Book poetry anthology To the Stars Through Difficulties. The Little Balkans Press will publish her first book of poetry, While the Kettle’s On, this year. Melissa is a high school English teacher in Pittsburg, Kansas, where she lives with her husband and dog.

2014 Memory: My husband and I spent October watching our beloved Kansas City Royals, who hadn’t been to the playoffs in 29 years, win eight straight postseason games. It was pure magic, watching those underdogs steal home and fall into the dugout making catches. I sobbed through the second half of Game 7, as it became apparent we were going to lose to a team that had already won the World Series twice in the last five years. The pain of that loss has worn off (mostly). Now I just appreciate that I got to be part of something so electric.

PETER KLINE is the Chase Lecturer of Creative Writing at Stanford University; he also teaches creative writing at the University of San Francisco. A former Wallace Stegner Fellow at Stanford, he has also been honored with fellowships from the James Merrill House and Amy Clampitt House. His work has appeared in Ploughshares, Poetry, Tin House, Best New Poets, and many other journals and anthologies. His first collection of poems, Deviants, was published in 2013 by SFASU Press.

2014 Memory: April in the Berkshires. It had snowed that morning, two last inches of winter, and I had the trail all to myself. I’d just come up a rise into a wood of tall thick pines when I saw something I’d never seen before, but which I recognized with great certainty: the pawprints of a bear. Ten inches long and almost as broad and tipped with unmistakable claws, they joined the trail in front of me, heading in the direction I was traveling. I followed them around a bend into the wood. There, in the otherwise unbroken snow, a second trail of prints joined them, exactly identical to the first, but half the size. I took a photo, quietly, and turned back.

SARAH MARTINEZ-HELFMAN is a world citizen, having lived in 4 countries (or 5 if you count several months in Tanzania and Zanzibar). She’s now rooted in Philadelphia where she’s trying to leave the world better than she found it. Sarah leads an organization dedicated to bringing hope, resources and opportunities to 50,000 young people eaach year. Her office door is covered with post-it haikus. Her favorite is:
Why must I explain
That the children will not wait?
They rely on us.

2014 Memory: On July 29, 2014, I opened my fb page and posted: “Looking for someone to marry us TODAY! Can you help?” Marcia and I had been together since 1995 and raised an amazing son together. Unable to legally marry in Pennsylvania because we are both women, we jumped at the chance in July 2013 when an offial in a nearby county began giving marriage licenses to same-sex couples. The Governor immediately disputed the validity of our marriage. Exactly one year later, we married again and this time the State of Pennsylvania recognized it. At last!

PEPPER TRAIL (Winter: Malaysia Fligth 370) is a poet, international natural history tour leader, and professional ornithologist. His poetry has appeared in Borderlands, Spillway, Kyoto Journal, Atlanta Review, Bellevue Literary Review, and other publications, and has been nominated for Pushcart and Best of the Net Awards. He is the author of Shifting Patterns: Meditations on the Meaning of Climate Change in Oregon’s Rogue Valley and a recent chapbook, Flight Time. When not traveling the world, he lives in Ashland, Oregon, where he works for the US Fish and Wildlife Service.

2014 Memory: As a naturalist, I’ve harbored the lifelong goal of visiting the Galapagos Islands. This year I fulfilled that dream and experienced an unforgettable moment on the island of Espanola. The place was Suarez Point, a lava bluff jutting into the tumult of wind and waves, the sky full of tropicbirds, frigatebirds, boobies, and albatrosses, with Darwin’s finches hopping around my feet, and with marine iguanas dozing in infernal tangled heaps just above the spray. Here, far from what we consider “the world” was the real news: the pageant of life, undiminished and evolving still, each generation a greater perfection. In that memory, I take my rest.

A Little Background, if You’re Curious

In early America, from about 1720 to the early 1900s, newspaper carriers would present their subscribers with a poem on New Year’s Day. These broadsides (ahem) were called Carriers’ Addresses. Illustrated with engravings, they would chronicle the year’s events. See images and information at Brown University’s special collection.

The origins of haiku have a tie to the annual through their traditional seasonality. A mention of the moment is a critical element to classic haiku. For those unfamiliar with Haiku, here’s a link to a site that discusses traditional formats.

Broadsided Press’s commitment to street-worthy art and writing leads us to combine these forms into a modern incarnation that borrows a bit, too, from the graphic spirit of the comic book.

2014 GUIDELINES (if you want to know how it all happened)

We’re doing things a little differently than years past, so pay attention.

This year, Twitter will be the primary mode of submission. Why? HYIR haikus, like Twitter itself, revolve around concise language and public events. With its 140-character limit, visibility, and share-ability, Twitter is just the right platform to collect these nuggets of pithy, public verse.

When it comes time to submit, you’ll simply tweet your haiku to us @broadsidedpress and tag it #HYIR #X (“X” being the season to which your haiku responds).

1) Think about this past year and the events that have dominated a given season. Write a haiku that captures a moment that illuminates such an event. Below are some suggestions to get you thinking. Your haiku should embrace the tradition of the form and be evocative, not didactic.

2.) As previously noted, this year, rather than emailing your entry* to us, you will enter the contest via twitter, which is better. Tweet your haiku @broadsidedpress #HYIR #X (X being the season to which you are responding). It’s that easy.

* Don’t Tweet? Don’t fret. You can still email your entry to us (broadsidedpress@gmail.com) if you really, really want to. But be warned—you will still be held to Twitter’s 140-character limit. If you choose to email your entry, please write “HYIR” and the season to which you are responding in the subject line.

5.) Please limit yourself and send your best work—only one entry per person, per season.

We will choose the winners, and in January, 2015, the final Haiku Year-In-Review will be published on the Broadsided site and posted around the world. 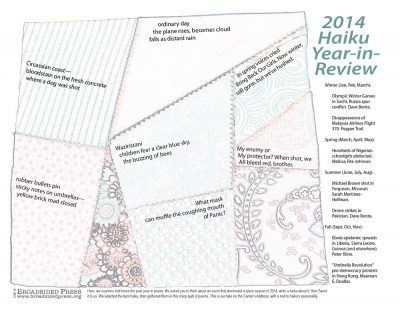 The HYIR: It’s a writing contest, it’s a collaborative grab-bag, it’s a panoply of voices and visions…. it’s the annual Haiku Year-In-Review (henceforth referred to as HYIR). The purpose: to celebrate, examine, and honor the past year in poetry and art. We asked writers to send us Haiku responding to the big news events of 2015 then we collected the best entries in this singular broadside.