We asked them look back on 2018 and share their most memorable moment, be it personal or public.  We also asked them to share why they chose their haiku subjects.

2018 Memory: Last night, I went to a slide talk by scientists from the Center for Coastal Studies, an amazing nonprofit research and education organization in Provincetown, MA.  Three people shared their highlights from 2018—mentioned were the big winter storms that sent fish into the basement of the church, a huge abundance of menhaden in our waters and the resulting bonanza for other fish and birds, a first-ever sighting of a loggerhead turtle at sea (this, from a scientist who has been working on the water here for over twenty years), and more.  It reminded me that although much public discourse and politics this year have been beyond grim, there are other realities, too.  This past year had some pretty stellar moments—some exotic, some daily.  I’d like to remember and hold up the moment in which, for the first time, I heard a white-tailed deer vocalize. It blew my mind. That stuck-hinge noise I didn’t know deer made and the pound of her hooves as she startled away.

Haiku: Why the IPCC report? It has to be held up and remembered and I’m hopeful that its release comes to be seen, in retrospect, as a turning point.  As the moment when we got over our complacency and started getting to work.

2018 Memory: In contrast to the difficult worldwide political backdrop, 2018 has been a beautiful and huge year for me personally. I’ve been on sabbatical in Wales since late July, and some of my favorite memories have been here—including hiking 220 miles along the staggering Carmarthenshire and Pembrokeshire coast. One morning, my husband and I walked through a downpour for four miles to find breakfast and arrived in Llansteffan soaking; we were waiting in the rain for the one café to open, when a man appeared from across the street and tapped my husband on the shoulder, and said, “Would you like some bread?” He turned out to work in a bakery, and pulled a big farmhouse loaf straight from the oven and handed it to us; we carried it up to the ruined castle, and right when we walked through the gates (we were the only ones there), the sun came out full-force, glowing the stone walls and lawn and across the estuary. Then we discovered a patch of wild blackberries and had a picnic of warm bread and berries in our private castle. Moving to another country has involved a lot of challenging transitions, too, but people have so often been kind and unexpectedly generous (I’ve also loved meeting fellow writers here in Cardiff, who have been really welcoming), and I’ve remembered how pivotal simple kindness often is.

Haiku: Since I grew up for the first ten years of my life in Fort Worth, Texas, in a predominantly Mexican neighborhood, and have extended family on both sides of the Arizona border, the current administration’s calls for a border wall, and the detentions at the border, and the angry rhetoric about the caravan and immigrants have all hit close to home for me. And even if I didn’t have personal connections (and know people who have been deported), I’d be upset at the inhumanity of this administration’s disregard for children’s and families’ and individuals’ lives and rights, and the hypocrisy—including the U.S.’s role in supporting unstable, oppressive regimes in many countries refugees are fleeing (to name just a few of the many concerns). I wanted to speak to some of what is being erased and replaced by exclusionary rhetoric.

2018 Memory: When I try to think of my “best” memory of 2018, a series of small, personal images come to my mind: lying in the sun while my little brother plays fragments of songs on his guitar, walking into an apartment with sunlight streaming in from both sides, running into my favorite high school teacher at a bar, smoking pipe tobacco with my dad in a backyard, seeing friends get married in a tiny courthouse ceremony—stuff like that. Against a backdrop of dark and enraging public events, I think these small, gentle, warm moments of 2018 became much more noticeable and important to me.

Haiku: Four months after Dr. Ford said it in the Ford-Kavanaugh hearings, I’m still thinking about the phrase “Indelible in the hippocampus is the laughter.” This unexpected string of words, describing such a (devastatingly) familiar wound, tumble in me.

2018 Memory: 2018 has been a turning point for me. Despite all the pessimistic political situations, I have had the opportunity to use my sadness and rage and share it in a supportive community, once I got accepted to the MFA program at the University of Miami. According to the National Endowment of the Arts, poetry reading in the US has increased dramatically within this past year, and people are more politically engaged than ever.

I think in dreams. Sometimes my dreams reflect the trauma of our time, particularly of more women speaking out on their experiences of sexual assault, like when I am being chased down by big powerful white men.

Despite the anxiety of these visions, however, the MFA program has unlocked a lot of other creative dreams within me, and even though they may be strange, they have helped me write and sometimes even act as gateways of psychic indications and therapeutic resolution. 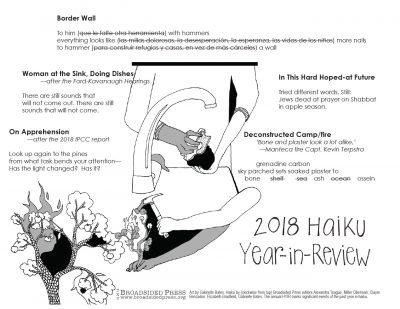 The HYIR: It’s a review, it’s a collaborative grab-bag, it’s a panoply of voices and visions…. it’s the annual Haiku Year-In-Review (henceforth referred to as HYIR). The purpose: to celebrate, examine, and honor the past year in poetry and art. This year, after a hiatus, the editors of Broadsided Press have come together to offer, in the spirit of the Carrier’s Address, a brief overview of 2018—we hope that 2019’s HYIR is much more celebratory.

Alexandra Teague’s (Border Wall) newest book, Or What We’ll Call Desire, is out from Persea in 2019; she teaches at University of Idaho. She thanks Courtney LaFranchi, an immigration attorney in Moscow, Idaho, for input on the Spanish.

Miller Oberman (Squirrel Hill Tree of Life Synagogue) is the author of The Unstill Ones, he teaches writing at Eugene Lang College.

Clayre Benzadon (Paradise, California Camp Fire) is currently an MFA student at the University of Miami. Her most recent publications have appeared in SurVision Magazine, Rat’s Ass Review, and HerStry.

Poet and naturalist Elizabeth Bradfield’s (Climate Change Report) fourth book, Toward Antarctica, will be published in May of 2019.

Gabrielle Bates (Ford-Kavanaugh Hearings) works for Open Books: A Poem Emporium, and her poems and poetry comics have appeared in the New Yorker, POETRY, and Black Warrior Review.