What did you think an artist would pick up on from your poem?
Poet John A. Nieves: My default position is to believe the artist’s reaction in this type of collaboration will, by nature, surprise the author. The one thing I was fairly sure would translate was the sense of weight and density. I was not even a little disappointed!

What inspires you in this poem?
Artist Meghan Keane: It is whole. It feels complete. Unnerving, truthful, sad, haunting, liminal, and complete. I am also inspired by specific words that conjure up images for me: wispy, falter, hum, erase, quiet, heavy.

Did the visual artist refract any element of the poem that made you see the poem differently?
Poet John A. Nieves: Meghan’s remarkable piece gave a new and powerful sense of texture to the emotional complexity of the poem; the gesture toward soot/pitch/the darkness in an ultrasound moved me toward that dense blackness in a visceral way. It really accentuated the fact that the lack (and, indeed, the pain of that lack) here is not an emptiness, but a presence, a whole and tactile loss.

When you began this piece, was it color, shape, or some other aspect that you followed? Did that change?
Artist Meghan Keane: Color, then shape.

I make a lot of monoprints that never make it out of my flatfiles. No one ever sees them. This print was made at the end of a monoprint day, where I had put a lot of black ink down for the prior print, and then decided to pull this one, as the final print of the day. I used a lot of solvent to erase the existing image, mushing it into oblivion with a paint brush. The ink remained but the image did not. Using a brayer and printmaker’s palette knife, and more solvent sprinkles, I sought to create a lighter, fuzzier, filtered light feel to this silent, dark space. I hoped to get at the sense of weightlessness (the hollow, noiseless intangibility of death) and burdensome weight that are both simultaneously present in the poem.

Since going to Japan in 2010 to make art, give it away, I have been obsessed with folds, folding, and folded paper. I liked the connection of how a folded paper crane can stand for so much in Japanese culture—given to someone who is sick (for healing), can also be welcoming, a good luck symbol of sorts—and its potential to stand for so much in this work. It felt like a fallen bird was possibly the perfect symbol for loss.

I took one of my failed cranes in the studio and used that to block out a funny, faltering white shape in the central part of the print. It’s hardly detectable what it is. And, it doesn’t matter for the work what it “is”—even though knowing process and intention are endlessly fascinating anecdotally. I wanted a form that would, through its shape, express loss and weight, as well as a shape that could be interpreted as symbolic, the object of loss, a stand in for the child lost in the poem. My sad, deformed, squashed (lifeless) crane made this possible.

What surprised you about this collaborative piece?
Poet John A. Nieves: I was really taken by the nearly monochromatic color palette. It would never have occurred to me, but it worked so incredibly well. I love the way it suggests shadows in features too thick and solid to be shadows. I also love the way rib-like structures create a focal point in the piece that also echoes plant life in winter.
Artist Meghan Keane: I was relieved! I had a hunch that the two would have a strong conversation through the artwork’s darkness and the grief that black signifies, but I wasn’t sure if the image would be able to engage the complexity and nuance of the poem as strongly as hoped. Very happily surprised…

I think the two together make a strong new work—just as poetry is about the images between the lines (the unspoken) and art is about the leap beyond the illustrative to the visually poetic (how real art work manages to transcend itself and become the first time you’re experiencing that expression), the two together seem to create a whole new way of understanding each as individual works. Something synergistic is definitely going on. I love them together.

Have you ever written work that has been inspired by visual art? What was that experience like for you? Why were you inspired to do so?
Poet John A. Nieves: I wrote a poem inspired by micro-documentary on a fire festival. I have also written an ekphrasis on the visual appearance of an epigraph (the shapes of the letters and the sweep of the line, not the words).

I think I am often in conversation with visual art, but often more than one piece at once. In fact, in my book, Curio, I feel Madeline Von Forester’s original artwork for the cover really opened up the way the book could mean.

How does literature fit into your creative life as a visual artist?
Artist Meghan Keane: I have always been interested in the various forms of expression and literature is no exception. As a child I wanted to be a writer. I left it behind in third grade, but books and good writing have been essential since the get-go. Since the rise in social media, coinciding with my commute time lessening, I read literature much less and current non-fiction writing much more. But I read voraciously and can’t sleep at night unless I have spent at least an hour reading something of merit. These days it is a lot of articles on racism, sexism, and intersectional concerns, and op-eds dealing with international affairs and women’s rights. This informs my creative life in unexpected ways.

I have over the last few years become bolder as a person and as an artist, and it is primarily through finding my voice—discussing ways to tackle social injustices—online. This same fearlessness that is required to denounce rape (keep in mind a year ago this was not a very socially accepted topic to bring up) is the same fearlessness that continues to inform the risks I take in my own work. The risk-taking and truth-telling of good writers inspire me to be courageous in my own work.

If the Broadsided collaboration were a piece of music, what would it be?
Poet John A. Nieves: The Black Top Cadence song “Unlucky (instrumental)” from the album Chemistry for Changing Times.
Artist Meghan Keane: Henryk Górecki – Symphony Nº3 (Symphony of Sorrowful Songs).

Anything else?
Poet John A. Nieves: I have always deeply held that all art is a conversation, and as artists, we very rarely get to experience an artifact of the non-us part of that conversation rendered creatively. I so deeply cherish this collaboration, not just as a window into the interaction of two artists, but as the artifact of the large and important conversation that drives art and empathy forward every day. Thank you for Meghan, Elizabeth and all who made this possible. I am in your debt.
Artist Meghan Keane: Thank you so much Elizabeth for making these invaluable collaborations possible! John, thank you for bringing your work to Broadsided. It was a privilege to create this piece to exist in conversation with your poem. Thank you. 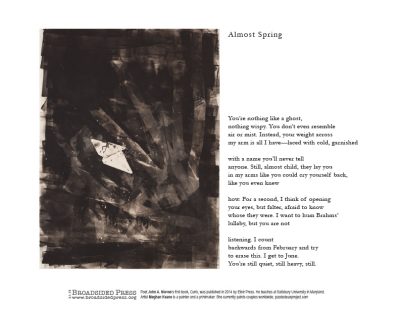 Poet John A. Nieves has poems forthcoming or recently published in journals such as Southern Reviewand Poetry Northwest. His first book, Curio, was published in 2014 by Elixir Press. He teaches at Salisbury University in Maryland.

Artist Meghan Keane is a painter and printmaker. She is the founding director of meghan.keane.studio and a visiting alumni artist at the Brooklyn College art department printshop. She currently paints couples worldwide. pasdedeuxproject.com