What did you think an artist would pick up on from your poem?
Poet Dorianne Laux: I wasn’t sure. There are so many objects in the poem: the blue pitcher, the glass of water, the pillow, the sky in the window, pink roses, the tissue box, her buttons. I guess I thought it might be one of those.

And yet, it seems that Jennifer Moses saw that much less visual but maybe more evocative “dark narcotic”, the heavy weight pressing down on the head which has become a fabulous hat, a somber gaiety, which I think captures the tenor of the poem.

Kevin Morrow also captures that heavy lightness with his stark black and white and the laughing woman standing on the unraveling spool of what? Bandage dressing? Package strapping? Weather stripping? All have certain metaphorical qualities given the narrative of a woman who has lost her grip on language.

What inspires you in this poem?
Artist Kevin Morrow: I was immediately inspired by the title. I worked with stroke victims while I was a Clinical Researcher at the Medical College of Wisconsin and had been there as life was leaving these patients. I would often receive pages for potential stroke victims coming in as ‘sudden aphasia’ and would rush to the emergency department to meet with these patients and their families. The flurry of personal emotions mixed with the professionalism of getting my job done is still something that I have not been able to figure out…so that great unknown, of ‘aphasia’ purely represented in the title of the poem; That great unknown that is the power of the brain, was what immediately drew me to dibs this poem and kept me inspired.

Did either visual artist refract any element of the poem that made you see the poem differently?
Poet Dorianne Laux: That contrast of light and dark, light and heavy; I don’t think I had considered that as deeply as I did on seeing the visual interpretations.

What surprised you about this piece, once you saw the artwork and poem together?
Artist Kevin Morrow: How the simple image and the complex nature of the poem came together to create a very flowing composition. A composition (poem and image combined) that represented the mystery and turbulence of an affliction, so calmly.

What surprised you about each collaborative piece?
Poet Dorianne Laux: How different they were, and yet how they achieve a similar sense of imbalance and contrasts.

What caught your eye in the visual response by your fellow Broadsided artist?
Artist Kevin Morrow: It struck me that Jennifer was able to tap into what ‘Honeya’ must actually feel and possibly visualize. A task I was too conservative to take on. Well done, I say.

Does anything surprising rise to the surface when you consider the two pieces of art and your poem together?
Poet Dorianne Laux: Well, I know who Honeya is, and it was surprising that both the hat and the odd apron dress are attire she might wear.

In looking at the poem and the two visual responses together, what connections or associations rise to the surface?
Artist Kevin Morrow: I feel that we both were tempted to engage in the surrealistic nature of a terrible affliction that typically has poor outcomes, however there is nothing negative or shocking in the imagery.

Have you ever written work that has been inspired by visual art?
Poet Dorianne Laux: I once wrote a poem based on Manet’s “Olympia.”

What was that experience like for you? Why were you inspired to do so?
Poet Dorianne Laux: I had seen a PBS Special on Manet and the woman who had posed for his paintings. I found out Victoria Meurent was a distinguished artist herself, but that all her paintings were lost. Depicted with brutal realism, I wanted to give Manet’s Olympia a voice, let her speak, see what she might have to say.

When you began this piece, was it color, shape, or some other aspect that you followed? Did that change?
Artist Kevin Morrow: My thoughts when I began was to represent some idea of infinite unknown and a flash to the past… the happy life before a life changing affliction. This idea didn’t change, however the image(s) and combinations of images changed. I knew that this work needed to be a photographic collage, due to the idea of memory… lost, and replaced by thoughts and ideas unknown to all but Honeya.

If you had to represent the Broadsided of “Aphasia” with Kevin Morrow’s art by one word, what would it be?
Poet Dorianne Laux: Quixotic
Kevin: Metamorphosis

If you had to represent the Broadsided of “Aphasia” with Jennifer Moses’s art by one word, what would it be?
Poet Dorianne Laux: Organic
Artist Kevin Morrow: Internal

Read any good books lately?
Poet Dorianne Laux: I just moved to the south, and so the story of a young white girl being raised by a black nanny was especially poignant. The poet has rendered a portrait of Gaither that is unforgettable. The book is Cradle Song, by Stacey Lynn Brown (C & R Press, 2010).
Artist Kevin Morrow: Monsignor Quixote by Graham Greene.

Seen any good art lately?
Poet Dorianne Laux: Aside from Morrow and Moses, one of my favorite artists is the little known Geri Digirono. Also the Poet Laureate of Sonoma County, she is a collage artist who works with the homeless. I’ll include an attachment of a collage we just bought from her called “Little Mary at the Playhouse Lounge”.
Artist Kevin Morrow: Liu Bolin at a gallery I can’t remember in SoHo. Also, just saw a wonderful Mark Twain exhibit today at the Morgan Library which contained many humorous sketches he did for short stories that were never published.

Anything else?
Poet Dorianne Laux: I love this enterprise. Artists and poets have a long history of exchanging ideas, inspiring and igniting one another, celebrating and supporting one another, and this extends that grand tradition. I also like the “guerilla” aspect of this project, placing small works of truth and beauty where they are accessible to passersby, available to anyone during the ordinary day.
Artist Kevin Morrow: This Broadsided experience was a great chance for me to step way outside of my usual genre of work that I create. Perhaps the next one will be even stranger… let’s hope at any rate. 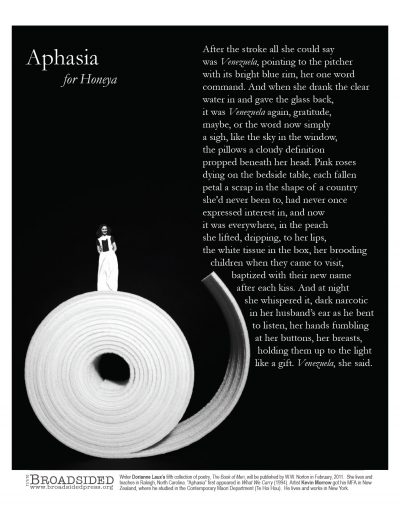 Poet Dorianne Laux’s fourth book of poems, Facts about the Moon, is the recipient of the Oregon Book Award. What We Carry was a finalist for the National Book Critic’s Circle Award. Her fifth collection of poetry, The Book of Men, will be published by W.W. Norton in February, 2011.

Artist Kevin Morrow received his MFA degree from the University of Auckland, New Zealand where he studied in the Contemporary Maori Department (Te Toi Hou). Upon completion, Morrow moved to Austin, Texas where he spent a year or so concentrating on earthworks. Morrow now lives and works in New York.