What did you think an artist would pick up on from your poem?
Poet Dorianne Laux: I wasn’t sure. There are so many objects in the poem: the blue pitcher, the glass of water, the pillow, the sky in the window, pink roses, the tissue box, her buttons. I guess I thought it might be one of those.

And yet, it seems that Jennifer Moses saw that much less visual but maybe more evocative “dark narcotic”, the heavy weight pressing down on the head which has become a fabulous hat, a somber gaiety, which I think captures the tenor of the poem.

Kevin Morrow also captures that heavy lightness with his stark black and white and the laughing woman standing on the unraveling spool of what? Bandage dressing? Package strapping? Weather stripping? All have certain metaphorical qualities given the narrative of a woman who has lost her grip on language.

What inspires you in this poem?
Artist Jennifer Moses: I liked the idea that one word born from some inner brain misfire could stand in for anything and still also be itself.

Did either visual artist refract any element of the poem that made you see the poem differently?
Poet Dorianne Laux: That contrast of light and dark, light and heavy; I don’t think I had considered that as deeply as I did on seeing the visual interpretations.

What surprised you about this piece, once you saw the artwork and poem together?
Artist Jennifer Moses: To me the image which I thought of as rather stormy and emotional became more internal and still when paired with the poem.

What surprised you about each collaborative piece?
Poet Dorianne Laux: How different they were, and yet how they achieve a similar sense of imbalance and contrasts.

What caught your eye in the visual response by your fellow Broadsided artist?
Artist Jennifer Moses: I was struck by the surreal pairing of the figure with the coil. Her posture too had humor and seemed to be inviting the viewer into her odd realm. It reminded me of black and white cinema when the film shifts into a dream state out of a twirling pattern.

Does anything surprising rise to the surface when you consider the two pieces of art and your poem together?
Poet Dorianne Laux: Well, I know who Honeya is, and it was surprising that both the hat and the odd apron dress are attire she might wear.

In looking at the poem and the two visual responses together, what connections or associations rise to the surface?
Artist Jennifer Moses: I believe we both attempted to make visible an illogical mind’s eye. the fact that we both chose black and white or nearly black and whit in my case, also was interesting to me because I thought at first of using vivid tropical color, the color of a vacation. But ultimately I felt the wistful notes in the tone of the poem called for a more somber palette. I like the way Kevin’s image seems to be inviting the viewer to enter into the new strange land-of-aphasia. I felt like mine was also some kind of invitation into a mind. However I think the temperaments of our images are very different and I really love the way Kevin has captured the absurd and the strange sensuality of the poem.

Have you ever written work that has been inspired by visual art?
Poet Dorianne Laux: I once wrote a poem based on Manet’s “Olympia.”

What was that experience like for you? Why were you inspired to do so?
Poet Dorianne Laux: I had seen a PBS Special on Manet and the woman who had posed for his paintings. I found out Victoria Meurent was a distinguished artist herself, but that all her paintings were lost. Depicted with brutal realism, I wanted to give Manet’s Olympia a voice, let her speak, see what she might have to say.

When you began this piece, was it color, shape, or some other aspect that you followed? Did that change?
Artist Jennifer Moses: Shape. I wanted a combination of soft amorphous aqueous world with a weighty feeling of collapsing form.

If you had to represent the Broadsided of “Aphasia” with Kevin Morrow’s art by one word, what would it be?
Poet Dorianne Laux: Quixotic
Artist Jennifer Moses: Surreal

If you had to represent the Broadsided of “Aphasia” with Jennifer Moses’s art by one word, what would it be?
Poet Dorianne Laux: Organic
Artist Jennifer Moses: Private

Read any good books lately?
Poet Dorianne Laux: I just moved to the south, and so the story of a young white girl being raised by a black nanny was especially poignant. The poet has rendered a portrait of Gaither that is unforgettable. The book is Cradle Song, by Stacey Lynn Brown (C & R Press, 2010)
Artist Jennifer Moses: The Little Friend, by Donna Tartt.

Seen any good art lately?
Poet Dorianne Laux: Aside from Morrow and Moses, one of my favorite artists is the little known Geri Digirono. Also the Poet Laureate of Sonoma County, she is a collage artist who works with the homeless. I’ll include an attachment of a collage we just bought from her called “Little Mary at the Playhouse Lounge”.
Artist Jennifer Moses: Burchfield Show at the Whitney, love watercolor, love the fact that he mined his own early work to reinvent his late huge and wonderful late works.

Anything else?
Artist Jennifer Moses: So much fun to respond visually to words… can’t wait for the next one!
Poet Dorianne Laux: I love this enterprise. Artists and poets have a long history of exchanging ideas, inspiring and igniting one another, celebrating and supporting one another, and this extends that grand tradition. I also like the “guerilla” aspect of this project, placing small works of truth and beauty where they are accessible to passersby, available to anyone during the ordinary day. 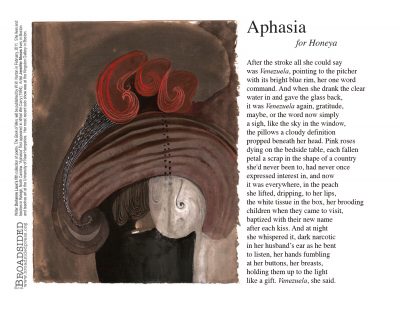 Poet Dorianne Laux’s fourth book of poems, Facts about the Moon, is the recipient of the Oregon Book Award. What We Carry was a finalist for the National Book Critic’s Circle Award. Her fifth collection of poetry, The Book of Men, will be published by W.W. Norton in February, 2011.

Artist Jennifer Moses is a painter living in Boston and teaches at the University of New Hampshire. She has exhibited her work throughout New England her most recent solo exhibition titled “A Line is a Straight Curve” was at the Kingston Gallery in Boston.