What did you think an artist would pick up on from your poem?
Writer Zach Savich: When I read that poem, I see a dark road. It looks wet because of headlights, not rain.

What inspires you in this poem?
Artist Meghan Keane: I was inspired by the imagery: the sound of the press; the simple blackness; the yellow line; the repetition, numerical or not; and the sense that it’s all familiar but also elusive, with the subtlety of dreams.

Did either visual artist refract any element of the poem that made you see the poem differently?
Writer Zach Savich: Meghan Keane animated the sentences—rippling. I like the thing being born in the middle, already tethered. Elizabeth Terhune showed me the situation as simultaneously airy residue and posed solidity, lyric gasp and narrative oomph. In hers, I can see the central arm as coming from either figure, then I look closer—it is clear whose arm that is. This happens to me all of the time and is in the poem and it breaks my heart.

What surprised you about this piece, once you saw the artwork and poem together?
Artist Meghan Keane: I was surprised by the additional layers of meaning, subtlety, context, and complexity that the poem lent to a work that is quite literally freely suspended in space; it was a bit of a shock to see how completely the image now “made sense.”

Does anything surprising rise to the surface when you consider the two pieces of art and your poem together?
Writer Zach Savich: I have trouble thinking about all three things at once, of even actually considering words and image at the same time except by relying on overall effect, lasting impression. Maybe this is what the Broadsided project foregrounds? How one aspect flavors the other, not by putting them in the same bite but by making me alternately (or alternatingly) treat one as a memory, an impression, and the other as perception, even as I try to understand them in a flash?

What caught your eye in the visual response by your fellow Broadsided artist?
Artist Meghan Keane: The lumbering animal… it has an ambiguity that makes it both bear-like and uncertain… as though it may also be a visual metaphor for the blackness and darkness present in the poem.

In looking at the poem and the two visual responses together, what connections or associations rise to the surface?
Artist Meghan Keane: The line “it takes a lot to make such a simple dark” stands out for me; in each work I see that “simple dark” as a primary preoccupation of each artist—even the poem, as a whole, seems to be exemplary of line after line creating a “simple dark.”

Have you ever written work that has been inspired by visual art?
Writer Zach Savich: There was one month in Paris when I wrote in museums, dutifully studying representation, then I felt solipsistic. I like Cole Swensen’s idea that ekphrasis can teach a way of looking, of attending to patterns and sight, that one can then apply to gardens and people and city streets. I frequently read about sculpture and architecture to help me think about poetry, but that’s reading.

When you began this piece, was it color, shape, or some other aspect that you followed? Did that change?
Artist Meghan Keane: When I began, I was immediately drawn to the idea of printing and using a woodblock, but my interest lay in wanting to explore printing a cross section of a tree, so that the woodblock would have a clearer relationship to its source, so to speak. It would also connect with the other references to nature and forests (i.e. bears) without being too literal. Hence, material and process was my true starting point. I was also drawn to the image of the dress, which I included in a first attempt along with the woodblocks. But it became clear that the literal representation was less compelling than the layers created through a variety of “simple dark”s—evidenced by Broadsided’s curatorial selection of this final image that is highly abstract and decontextualized.

If you had to represent the broadsided of “As Any…” with Meghan Keane’s art by one word, what would it be?
Writer Zach Savich: Phonograph
Artist Meghan Keane: Whump

If you had to represent the broadsided of “As Any…” with Elizabeth Terhune’s art by one word, what would it be?
Writer Zach Savich: Limbic
Artist Meghan Keane: Departing

Read any good books lately?
Writer Zach Savich: I woke up early this morning to finish the last hundred pages of Stanley Crawford’s Mayordomo, a memoir of irrigation and garlic farming in northern New Mexico; highly recommended. Tonight I am going to read from the new Gulf Coast, Lisa Robertson’s R’s Boat, and a little Hawthorne.
Artist Meghan Keane: I just finished reading a slew of anti-war novels, modern classics I never read in high school: A Farewell to Arms, 1984, Slaughterhouse Five, Cat’s Cradle. These books and the recent collaboration with Broadsided have inspired me to continue creating work that responds to text. So far I’ve done a small series of works related to 1984, exploring visual tension and how very little amounts of red express more bloodshed than an image of actual warfare can. Reading Vonnegut for the first time has also been a particular delight. I feel his sense of humor is similar to some of what I try to do in my work—combine the unexpected and mildly-irreverent to allow deeper truths to spring forth. Well, it’s the aim, at any rate…

Seen any good art lately?
Artist Meghan Keane: Although not live, I have been looking at books on printmaking recently—Robert Motherwell, Louise Bourgeois, William Kentridge. I’m continually convinced that printmaking is an underrated artform. Prints, for me, are just as beautiful as paintings—and potentially more labor-intensive. I recommend spending more time with fine art prints of all varieties (lithographs, monoprints, etchings, silkscreens), and, of course, in person.
Writer Zach Savich: Yesterday I saw a man hit the side of a parked truck with a baseball bat. I was in my car. I tried to make my eyes dead as I passed. I think I was differently disturbed than if I had seen him hit a person. There was no one else around. Maybe it was his truck.

Later I tried to make my eyes lively and receptive as I walked around a local reservoir. There were some teens posing for a photography project. One threw leaves in the second one’s face while the third took a picture. They had a circular silver screen to help position the sun. I made my eyes lively yet uninviting, hoping they wouldn’t ask me to help them stage the photograph.

These Broadsided images make me think of my poem like those teens will think of that photograph when they find it in several years. It may represent all of photography to them more than any camera, technique, or lesson from this year’s class. Is that sad or true, I wonder, then I wonder if it is about memory or art. A while ago, I really enjoyed Emily Eveleth’s monumentally grand paintings of jelly doughnuts at the Smith College Museum of Art.

Anything else?
Artist Meghan Keane: The experience was far more generative of ideas than expected. I really enjoyed being faced with a “visual-problem-to-solve” situation—it took me outside of my usual realm of creativity and stretched me in new and aesthetically invigorating ways. 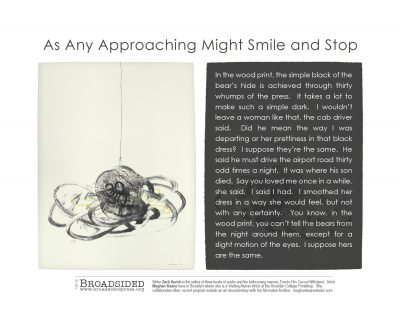 “As Any Approaching Might Smile and Stop” (Savich & Keane) (PDF)

Writer Zach Savich is the author of three full-length collections of poetry—Full Catastrophe Living, Annulments, and The Firestorm forthcoming from Cleveland State University Poetry Center—as well as a lyric memoir, Events Film Cannot Withstand, that is forthcoming from Rescue Press.

Artist Meghan Keane exhibits nationally and internationally and her works can be found in private collections throughout the United States, Latin America, Europe and Japan. Recent projects include a solo exhibition, “PROJECT NIHON / sustainable art travel,” in Tokyo and “do it yourself candide,” which Keane was invited to create for the New York Public Library (january 2010). Keane is the founding director of meghan.keane.studio (meghankeanestudio.com).