What surprises you about Markie’s poem in conversation with your art?
Artist Michele L’Heureux: I am surprised by how “right on” the spirit and mood of the poem are to me—how akin to the painting the words seem. While Markie’s narrative for the painting isn’t my own, she captures the quiet and slightly mysterious atmosphere of the piece so beautifully.

This poem was chosen in response to Michele L’Heureux’s painting, “Daisy’s Garden”—can you talk about the experience of finding words that were in conversation with the image? What leapt out first from Michele’s art? A particular image? A mood? A line?
Poet Markie Babbott: Michele L’Heureux’s painting invokes and invites, the dreamy use of mixed media layers upon layers, especially the lettering, asks the viewer to stop and observe, to wonder and project. The unapologetic use of color and the globular/ serpentine shapes evoke springtime abundance, yet the central subject appears both contemplative and exceedingly vulnerable.

I’m drawn to the tension line, where the internal and external worlds meet. I began to write from the girl’s point of view, but then that changed to the girl’s mother/ protector (not a coincidence that I have a teenage daughter!). The girl doesn’t need protection per se but her privacy and power do. I’ve been riffing off of Stein’s poetry for several years and this particularly epigraph led me into the idea of disturbance, menarche (translated from New Latin and Greek as Beginning Moon), as a source of tremendous power, like when pre-historic humans discovered fire.

What did you expect a writer to pick up on from “Daisy’s Garden”?
Artist Michele L’Heureux: I expected a writer to respond to the garden imagery, the florals and greenery, and perhaps the solitude of the female figure. I love that Markie played up the idea of “more,” and that the painting called up for her a quote by Gertrude Stein. That makes me happy.

Paired with the art, do you think the poem does something different or has a different tone?
Poet Markie Babbott: Absolutely, they reverberate, reference, reflect: 1+1=3. L’Heureux’s skill with mixed media complements my interest in collage. Somehow the creative process is fueled by mystery, I can sense that in this collaboration.

Paired with the poem, do you think the art does something different or has a different tone?
Artist Michele L’Heureux: I think the poem enhances the painting a lot, creating a richness and tension that elevates the work to a new level. I love the narrative of the poem, and I also think Markie invites the reader to invent her/his own story for this girl in the garden, to imagine something magical for her.

Have you ever written work that has been inspired by visual art before? What was that experience like for you? Why were you inspired to do so?
Poet Markie Babbott: Yes, it’s part dialogue with the image and artist and part free association with a new landscape. Art (visual, music, dance) is like traveling, asks me to expand my habitual ways of seeing and being. I just participated in the Palm Beach Poetry Festival’s Ekphrastic contest in which poets wrote to en plein air paintings. Also, my writing group often uses visual images as prompts.

Have you ever had a writer respond to your work before? What was the experience like?
Artist Michele L’Heureux: This is the first time I’ve had someone respond to my work in writing (besides a review), and I enjoy how the colors, lines, and symbols in the poem translate into new images, particularly “onion grass and sweet gum pods”—just lovely. Being a visual person, reading the poem was like seeing a brand new painting spring from my own. I might like to create a new painting based on the poem now!

If your poem were a song, what would it be?
Poet Markie Babbott: Wordless, probably Joshua Redman sax, perhaps “Oumou” or “Sweet Sorrow.” I love adding this dimension to the collaboration, maybe next layer could be interpretive dance and then the scent of the art, for “Daisy’s Garden” a hit of moist soil and lilac.

If your art were a song, what would it be?
Artist Michele L’Heureux: I think something by Joni Mitchell or Rickie Lee Jones feels right.

If your broadside collaboration were a song, what would it be?
Poet Markie Babbott: It would be a kind of call and response, duet, maybe “One Voice” by the Wailin’ Jenny’s or my friend Suzanne’s audio of loons on Lake Wentworth.
Artist Michele L’Heureux: While the scene of “Alice” by Tom Waits is an icy pond, I think the tone and melody of the song seem to fit the outcome of this collaboration.

Seen any good art lately?
Poet Markie Babbott: Bill Traylor at the American Folk Art Museum in NYC; “Daisy’s” figure in Michele’s piece has some resemblance to Traylor’s figures, allows for interpretation and projection.
Artist Michele L’Heureux: On a recent trip to Madrid, I fell in love with The Marionette Maker by Janet Cardiff & George Bures Miller—a multimedia installation incorporating mechanically operated puppets (one which sings opera), a life-like sleeping woman, and all kinds of wonderful props inside a vintage camper. The piece was situated inside Retiro Park’s Crystal Palace, creating a whimsical juxtaposition of high brow and low brow.

Read any good books lately?
Poet Markie Babbott: I’m a stack-of-books kind of reader and right now, I’ve got a few in the works including: Half of a Yellow Sun by Chimamanda Ngozi Adichie, This Changes Everything by Naomi Klein, Behind My Eyes by Li-Young Lee and at the bottom of the pile is my partner’s copy of The Life-Changing Magic of Tidying Up by Marie Kondo.
Artist Michele L’Heureux: I’m in the middle of Little Bee by Chris Cleave and am enjoying it immensely. I recently re-read Pearl Buck’s The Good Earth, and found it so disturbing and beautiful at the same time.

Anything else?
Poet Markie Babbott: Currently, my 93-year-old Dad and I are collaborating on a photography/ poetry book based on the Great Swamp Wildlife Refuge in NJ. This Switcheroo has given that project a blast of tailwind. There’s such intimacy in making art together, great appreciation for Michele and all at Broadsided Press.
Artist Michele L’Heureux: I am currently working on a series of artists books, and this latest Broadsided experience has made me curious about collaborating with writers from the start of a piece, so that the writing and the visuals are integrated in a different way. I think I might try this out!

Such strange, varied, and wild things grew in the minds of writers responding to Michele L’Heureux’s painting, “Daisy’s Garden.” The flowers became balls of yarn or strange fruit, the white scrawl inner thought or literary allusions, the vines DNA strands or an umbillicus, and the snakeskin over the figure’s body hissed serpent to many.

In a painting so tangled and layered, it might not be suprising that the texture of language in many submissions was equally foregrounded. Sounds bounced off of sounds, and a contemplation of the wildness of words was a part of responses.

As editors, we were blown away. Bowled over. Astounded by bounty.

Our final decision rested on Markie Babbott’s “Beginning Moon.” The poem as a response to Gertrude Stein’s unfixity and to the lush organic world of Michele L’Heureux’s work thrilled us, as did the poem’s ability to both sing and mean—to honor song and yet not lose story or significance in that texture.

There were three other submissions that we felt deserved special recognition for their response to and interaction with Michele L’Heuruex’s artwork: 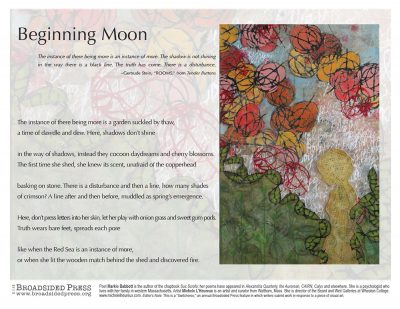 Note: This broadside is the result of the 12th Broadsided Press Switcheroo. What is The Switcheroo?  Every year, during National Poetry Month, we like to turn the tables and invite writers to respond to art we post.

All Broadsided artists were invited to submit up to three pieces of work for the Switcheroo. We then asked Maura Cunningham the April, 2014 Switcheroo artist, to review the submissions, choosing one that she thought would be open to literary response and would work in the Broadsided format.

Of her decision, Cunningham had this to say:

It was very difficult to choose a work of art as each of the pieces submitted had its own clear and unique voice. I settled on the one that most spoke to my sensibilities and sensitivities. Daisy’s Garden by Michele L’Heureux speaks to me of how we travel through our interior and exterior worlds. The nuance of each exterior space we occupy often mirrors and allows for certain parts of our interior landscape to be discovered and contemplated. This piece evokes so many things for me. The various layers of clarity, and sharpness, movement and stillness, combined with the blurry and suggested, feel ripe for poetic exploration.

The techniques applied in this piece evoke qualities of experience. Sometimes we cycle in certain places. Sometimes we get stuck. Other times we notice, ponder and delight in the intricacies. Some things we move through without ever having truly seen them; but for recollecting them as memory. I’m hoping the poets of Broadsided are as inspired by this piece as I am, and find it the perfect terrain for poetic response.
—Maura Cunningham

Artist Michele L’Heureux is an artist and curator from Waltham, Mass. She is director of the Beard and Weil Galleries at Wheaton College in Norton, Mass. She is currently taking a year-long sabbatical to draw and cook throughout the US and Portugal. Check out her work at www.michelelheureux.com.