Did the poem refract any element of the art that made you see your piece differently?
Artist Kate Baird: I had been thinking of a “bird’s-eye view” as a figure of speech referring to a particular perspective, but I never gave much thought to actual birds. Reading the poem made me consider the birds (whose point of view I’d lifted) in a very visceral way.

This poem was published (and I assume written) earlier—what made you think of it when you saw Kate’s art?
Poet Amanda Rachelle Warren: Something in the angles of Kate’s painting, “Bird’s Eye,” looks broken, fractured… or perhaps fractal, kaleidoscopic! Very cool! As soon as I saw the painting I knew I had a poem to pair with it. The painting itself is very interesting; each time I look at it I see something different. Depending on what the eye of the viewer focuses on, the image seems to change from peaceful to dark, from expansive to claustrophobic. And, to be honest, as soon as I saw it I thought “yellow gloves,” and “scattered straw,” and “falling feathers,” and it immediately brought the poem to mind.

I love that my eye is drawn to the four-leaf clover as the one really recognizable thing in the painting. It is the only thing not shattered into angles, or refracted. It’s tiny and whole and, well, lucky.

What did you think a writer would pick up on from your art?
Artist Kate Baird: I don’t think I had specific expectations about this, but maybe something having to do with landscape or distance.

Paired with the art, do you think the poem does something different or has a different tone?
Poet Amanda Rachelle Warren: I’m not sure. It certainly makes the painting seem much darker. Perhaps the pairing too makes one consider the alternative point of view not mentioned in the poem… that of the bird. It creates a tension between the two: on one side the bird’s fractal point of view, versus the cold response of the mother in the poem, and the horrified/fascinated child who dreams of feathers.

What surprised you about the pairing of this poem with your art?
Artist Kate Baird: Since the image is from the perspective of the things that die in the poem, the pairing seemed to create a sort of haunting. While neither the poem nor the image would necessarily do this on its own, I feel like together they draw your attention to the absence of the birds, the consequence of the action that takes place in the poem.

Have you ever written poems in response to art? What was the experience like for you?
Poet Amanda Rachelle Warren: I’ve been talking about ekphrastic poetry quite frequently lately with a friend of mine, poet Cindy St. John. She has written quite a few poems in response to art, film, and music: they’re wonderful. I have decided that I need to write more poems about art, or in response to art. I have written a few, one about Rothko’s “Chapel” installation; it was the last piece he completed before committing suicide. I had to write about it.

I’m always surprised I don’t write more about art. My father is an artist, my husband too, and I don’t want to say I’m an artist, but I do like to paint and sketch. Art and poetry have so much in common; as far as I can tell they just use different mediums, the goal is so similar: to enter into a dialog about the human experience, to express a complex idea through metaphor. Now, Pound said, “Poetry, unlike painting, is auditory. It exists first in time.” But, that difference is just incidental—a result of medium. I could just as easily say, “Painting, unlike poetry, shows a record of its own making.” Same difference.

If your art were a weather pattern, what would it be?
Artist Kate Baird: Some sort of shifting cloud formation?

If your poem were a weather pattern, what would it be?
Poet Amanda Rachelle Warren: A wind shear?

If the broadside collaboration were a weather formation, what would it be?
Poet Amanda Rachelle Warren: Orographic clouds.

Read any good books lately?
Poet Amanda Rachelle Warren: Yes, I’ve been reading books on scientific curiosities, cryptozoology, and oddities: very interesting stuff! I’m quite research-oriented when it comes to poetry, so I’ve been taking a lot of notes. I’m sure I’ll soon be writing poems about some of the strange things I’ve been reading.
Artist Kate Baird: I’m reading Austerlitz, by WG Sebald. It’s good.

Seen any good art exhibits lately?
Poet Amanda Rachelle Warren: I wish I had more time to do attend things like that. Unfortunately, it seems like it has been a while since I’ve seen an exhibit. I need to reprioritize and find a showing.
Artist Kate Baird: Last week I visited the Blanton Museum of Art in Austin, Texas. There’s a good show up there called “Transactions.”

Anything else?
Poet Amanda Rachelle Warren: The title of the poem “Murmuration” is actually the proper name for a group of starlings. I hate starlings. They aren’t native to North America, but were transplanted here by a man, Eugene Schieffelin, around 1890. The rumor is that he was attempting to transplant every bird mentioned in a Shakespeare play to Central Park. There is one line in Henry IV about teaching a starling to speak; as a result of that single line starlings have spread across the country, and have had a devastating impact on native bird populations. They have been known to push eggs out of nests, kill young, and gang up on smaller birds. I wish that were the real reason I hate starlings; it would be semi-admirable. However, the truth is that starlings are mimics, and the starlings by my house have learned to mimic things like yowling cats, car alarms, cell phones, and even my alarm clock… that pushed it. So, not only are they mean, invasive birds, they’re irritatingly loud. I yell at them. Soon, they’ll be imitating me saying, “Shut up, birds!” It would be unnerving to be woken by one’s own voice and have no response but to repeat what it says: creepy.
Artist Kate Baird: Thanks to Amanda Warren—I’d love to read more of her poems.

Kate Baird’s art, “Bird’s Eye,” chosen by the Switcheroo curator Lynn Stanley from work submitted by Broadsided artists, is the polar opposite of the work chosen for our last Switcheroo. Her fragmented, fractal landscape (or eye-scape?) was an invitation that writers responded to in a wide variety of ways. The quality and range of submissions were incredible: poems and stories about un-iced rivers within frozen seas, the patchwork seen from 30,000 feet, the nature of vision, the voices of birds, and the nature of art itself. The breadth of styles, voices, and approaches, too, were exciting.

“Murmuration,” the poem by Amanda Warren we selected for this Switcheroo, caught us for both its narrative drama and for its emotional crazing. There’s a sense, in the poem, of memory’s faultlines and the traceable effects of disturbing experiences. These small fissures echo the geometric shapes of Baird’s art. It’s as if Warren lent story to the pulse of Baird’s work—and that kind of nearly-tangential yet utterly visceral conversation between art and story is what drives Broadsided.

There is, at the heart of Broadsided, an appreciation for serendipity. We don’t know where the Vectors are posting or how the broadsides are received on the street. When we send a poem out to the Broadsided artists, we don’t know who will respond and we don’t know what form that response will take. In a sense, Broadsided is an act of faith: that the work will find its audience and that the literature and art will join together in a surprising and unforeseen amplification of one another. Baird’s piece and Warren’s poem epitomize this glad surprise.

As with every Broadsided publication, you can read what the artist and author thought of the whole process in our Collaborators’ Q&A.

Our thanks to all writers who sent in their creative responses.We can’t wait to see what happens at the next Switcheroo. 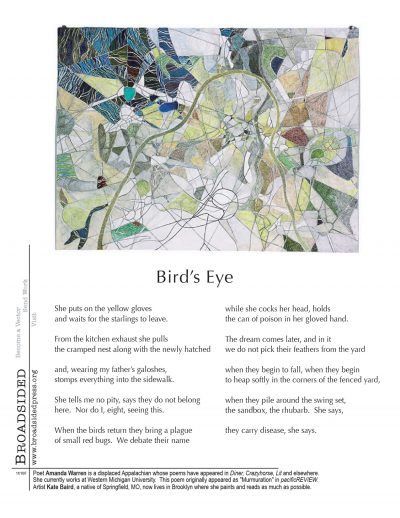 Note: “Bird’s Eye” is the second Broadsided Switcheroo feature. What is The Switcheroo? A turning of the tables.

We invited all Broadsided artists to submit up to three pieces of work. Lynn Stanley reviewed the submissions, choosing the piece below, “bird’s eye” (mixed media on paper, 30″ x 22″) created by Kate Baird.

Of the curatorial process, Stanley said:

The theory is that with practice comes ease. If so, it’s going to take a lot more practice at being the judge and jury of any body of creative work, before the task feels like a natural activity to me.

In the case of Broadsided’s Switcheroo, the hope is that by choosing a particular work of art, one’s actions create something to catch a poem in, like lopping off the limbs of a tree to craft a ship’s mast: the armature for a sail. So, this is how I comfort myself—with a seafaring metaphor. This and knowing that no dream of salvation will be dashed as a result of my choices.

The work I’ve settled on was chosen for its ability to hold my gaze. My initial reaction was to what felt like the chaos of line and color and the composition’s familiarity to loopy line drawings from childhood. With time I found myself focusing into it, the way one might look at landscape from a plane: finding pattern and meaning, then allowing myself to make idiosyncratic associations. It was with some satisfaction that the title “Bird’s Eye” revealed itself when I pulled it from the email in which it was sent to me.

Thanks again for the opportunity to be a part of this process and to all the artists who submitted their work. I’ll look forward to reading new poems.
–Lynn Stanley

Poet Amanda Rachelle Warren is a displaced Appalachian. She has most recently been published in Diner, Crazyhorse, Lit, and the Greensboro Review. She is a recent graduate of Western Michigan University’s doctoral program in English, a former poetry editor for Third Coast, and is currently working as both a Part-Time Instructor and the Assistant to the Dean of the Graduate College at Western Michigan University. The poem published here originally appeared as “Murmuration” in pacificREVIEW.

Artist Kate Baird lives in Springfield, MO. She is a painter and works as a teaching artist with Placeworks, an arts outreach program for rural schools. Her work can be seen at www.katebairdart.com.