What did you think an artist would pick up on from your poem?
Poet J.D. Smith: I’m frankly stumped on this one. Since the poem is based on an actual event, I have my own vivid and disturbing memory, and it has crowded out any specific sense of how the poem would be illustrated. Under these circumstances I am pleased and not a little relieved to let my work end and the visual artist’s work begin. I had a similar experience a few years ago in seeing the illustrator’s initial sketches for my one children’s book so far. I knew I could leave my work in her hands.

Specifics of technique or composition aside, I hoped that a visual artist would take seriously the poem’s thematic darkness and what I would like to consider its moral gravity. A less insightful artist than Mr. Haber might have rendered the poem as a primarily decorative, perhaps Impressionist-inspired scene rather than taking into account the poem’s movement. His approach, though, has turned this broadside into a kind of diptych.

What inspires you in this poem?
Artist Ira Joel Haber: I liked the image of a home, of returning home and the soft recollections of nature.

Did the visual artist refract any element of the poem that made you see the poem differently?
Poet J.D. Smith: The division of the illustration into two main panels approximately reproduces the proportions of the sonnet’s traditional division into octave and sestet. In its versification the poem is an Elizabethan sonnet, which is theoretically resolved in the final couplet. In practice, though, holding back the poem’s final stage of rhetorical development until that point is fiendishly difficult. Many Elizabethan sonnets, this one included, end up revealing a Petrarchan octave-and-sestet structure. In short, I am reminded of the tradition in which I was attempting to work and reminded that people will not be fooled by the poem’s putative structure.

What surprised you about this collaborative piece?
Poet J.D. Smith: This may explain why I am a writer rather than a visual artist, but I was most surprised by how the illustration frees itself from the literal and hews instead to mood and recollection, thus serving as complementary rather than redundant.

What surprised you about this piece, once you saw the artwork and poem together?
Artist Ira Joel Haber: How well they worked together. I reworked an old painting using photoshop which I sometimes do for my drawings that are used for poetry and literary magazines and journals.

When you began this piece, was it color, shape, or some other aspect that you followed?
Artist Ira Joel Haber: I strictly kept the poem in my mind and actually in front of me. I did many “drawings” I didn’t have any preconceived notion about what the finished work would look like, and submitted many pieces to Liz [Elizabeth Bradfield, Editor-in-Chief].

Have you ever written work that has been inspired by visual art? What was that experience like for you? Why were you inspired to do so?
Poet J.D. Smith: I definitely have. I once wrote a prose poem about Ed Ruscha’s untitled drawing of a dry-wall hammer, of all things. I am an unhandy person from a family where several people have worked in building and trades, and that work spoke to me at some level. I’ve also written a still-unpublished poem in response to a painting in my workplace that consists largely of an open but dark doorway.

More idiosyncratically, I’ve written a couple of poems based on paintings that exist only in my imagination. My first collection, The Hypothetical Landscape, takes its title from one of those poems. That poem and another in the collection, “Still Life with Apple,” could conceivably serve as pieces of conceptual art that might be hung on a wall in lieu of a canvas. My notebooks hold some other work that could work the same way, as a hypothetical gallery or showing.

If you had to represent the Broadsided of “Botanical Garden” with one word, what would it be?
Poet J.D. Smith: Layered. Now I’ll need to use more words to explain the single word. The illustration itself has layers of color and complexity, evoking foliage, water and the goldfish therein as well as multiple points of perspective. Both the illustration and the poem are excavations of a sort as well as journeys.
Artist Ira Joel Haber:  Lovely

Read any good books lately?
Poet J.D. Smith: I usually freeze up and forget everything when I am asked a question like this in person, but answering by email allows me the luxury of time.

The answer is several. The poetry collections that come to mind Long Division by Andrea Cohen and Downstate by David Gardiner, both from Salmon Press in Ireland. On deck is Richard Wilbur’s Anterooms.

I’m also starting to nibble at the English translation of Carl Jung’s Red Book, which I asked for and which my wife Paula gave me for Christmas. I’ve also been proofreading the final version of my essay collection, which I would prefer to think of as a good book, before it goes to press.

All this said, I’m sure I’m forgetting something.
Artist Ira Joel Haber:  I don’t read as much as I would like but just finished an interesting novel by Donald Windham called Tanaquil and a memoir by Augusten Burroughs A Wolf At The Table and a charming fictional memoir by Darcy O’ Brien called A Way of Life, Like Any Other which was about his childhood growing up in Hollwyood. Darcy’s father was the actor George O’ Brien a favorite of mine. Also reading a book of poems This Beautiful Bizarre by a facebook friend of mine Montgomery Maxton who sent me an inscribed copy. Also a biography of the great painter Marsden Hartley, and I’m about to start The March by E. L. Doctrow.

Seen any good art lately?
Poet J.D. Smith: Much to my embarrassment, I have not. This is doubly embarrassing because of living in Washington, DC, where theare are so many free museums. The closest I have gotten to a New Year’s resolution for 2011 is to make sure that I am sufficiently nourished by the arts.
Artist Ira Joel Haber:  The last exhibition that I saw that I thought was stupendous was the large retrospective like exhibition of Robert Rauschenberg that was at Gagosian Gallery in Chelsea. I don’t get to as many shows as I would like to, but I do see work by artists who are my facebook friends. This is a great way for me to discover artists whose work I would never know about, and it also is great for me to post my art and share it with artists who are not familiar with my work.

Anything else?
Poet J.D. Smith: Two things. First, I am grateful to be included and hope to share my work with new readers. Second, I would like to say something about poetry’s role in our cultural diet. In a time when our schedules are often fragmented into very short segments, I hope more and more people will fill those segments with poetry as well as other kinds of reading. I suspect that often doesn’t seem to represent a live possibility for many readers, and that’s a shame. While not all poems are short, long poems as well partake of heightened language that even in small portions can make a subway ride or time in a waiting room more bearable—and might even enhance one’s sense of being alive and a whole person.
Artist Ira Joel Haber:  This is my 6th Broadside and I love doing them. Each one has been a unique experience for me. 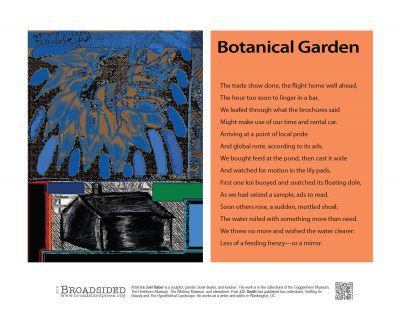 Poet J.D. Smith has published two collections, Settling for Beauty (2005) and The Hypothetical Landscape, and in 2007 he was awarded a Fellowship in Poetry from the National Endowment for the Arts. His poems have been nominated for Pushcart Prizes on three occasions and have appeared in literary journals including Able Muse, lyric poetry review, Measure, Tar River Poetry and Texas Review. His prose in several genres has appeared in journals including American Book Review, Boulevard, Chelsea, Exquisite Corpse, the Los Angeles Times and Pleiades. Smith’s one-act play “Dig” was produced in London in June 2010, and his first children’s book, The Best Mariachi in the World, was published in bilingual, Spanish and English editions in 2008 and was named one of the year’s best children’s books by Críticas Magazine. His first collection of essays, Dowsing and Science, was published in early 2011. A resident of Washington, DC, he provides updates at http://jdsmithwriter.blogspot.com.