What inspires you in this poem?
Artist Sarah Van Sanden: I was inspired by how the poem evokes a scene of utter bleakness and contrasts it with such a rich description of the fire.

What did you think an artist would pick up on from your poem?
Poet Todd Davis: The color of the flames as the trash burns. The syringes. The barrel itself and the encroaching night.

When you began this piece, was it color, shape, or some other aspect that you followed? Did that change?
Artist Sarah Van Sanden: Shapes were my way into the poem, but the inherently amorphous qualities of fire and smoke required that I represent them differently than the rest of the image.

Did the visual artist refract any element of the poem that made you see the poem differently?
Poet Todd Davis: The elemental foregrounding of the barrel itself. While I called the poem “Burn Barrel,” it was still a poem about the girl for me. I appreciate that in this visual representation, the girl does not appear at all, that the fire and the barrel are foregrounded and that the landscape in the background becomes a prism or representation of the girl’s presence.

What surprised you about this collaborative piece?
Poet Todd Davis: Something very simple but quite important to me: the air holes and the open space that the artist included in her representation of the burn barrel. Literally the holes in the barrel allow the fire to breathe, but those pierced openings also suggest a kind of light or illumination that the girl may be seeking in feeding the fire.
Artist Sarah Van Sanden: Not much, really. I do a lot of playing around in Illustrator with the poem and the image to make sure they’ll work together.

Have you ever written work that has been inspired by visual art? What was that experience like for you? Why were you inspired to do so?
Poet Todd Davis: I’ve written many ekphrastic poems. Much of that writing has been inspired by the work of Andrew Wyeth and Jamie Wyeth. But I’ve also written in response to paintings by Bartolo Di Fredi, Albrecht Dürer, Edgar Degas, Claude Monet, Thomas Hart Benton, Georgia O’Keeffe, Charles Burchfield, and Craig Blietz. I hope the visual elements of my poetry are a clear, driving force for the reader. I’ve long wished I could be a visual artist. I admire so many painters, and regardless of style, when I look at a painting, often some narrative element springs to mind. Paintings and photographs are often catalysts for the way I approach writing a poem, whether it is explicitly named or not.

How does literature fit into your creative life as a visual artist?
Artist Sarah Van Sanden: While I am a creative person, I don’t create from a vacuum. I love a problem to solve. Literature gives me concepts and narratives to interpret into visual form.

Describe the collaboration in one word.
Poet Todd Davis: Symbiotic!
Artist Sarah Van Sanden: I never really have a sense of a Broadsided collaboration as a whole until I’m able to see what the poet’s responses are to my image. It’s always so rewarding to spend a lot of time with a poem and let it draw something out of me, but I always hope that my work also resonates with the poet’s intent.

If the Broadsided collaboration were a piece of music, what would it be?
Poet Todd Davis: A slow-moving melody played in the lower register of a cello.

Seen any good art lately?
Artist Sarah Van Sanden: I’ve been looking at Kara Walker’s work again lately. I am in awe of how she uses such beautiful, delicate storybook imagery to remind us of the very real violence and hatred we don’t want to see in ourselves.
Poet Todd Davis: I was in Door County, Wisconsin, in mid-October, visiting my friend, the painter Craig Blietz. I saw many of his wonderful paintings in progress in his studio and at one of the galleries that represents his work. On the same trip, I also visited Trent Miller, another artist friend, in Madison, Wisconsin, and saw his new series of pen and ink drawings, many of which were domestic scenes that I was quite taken with—he captured a hushed quality in these tightly framed vignettes. 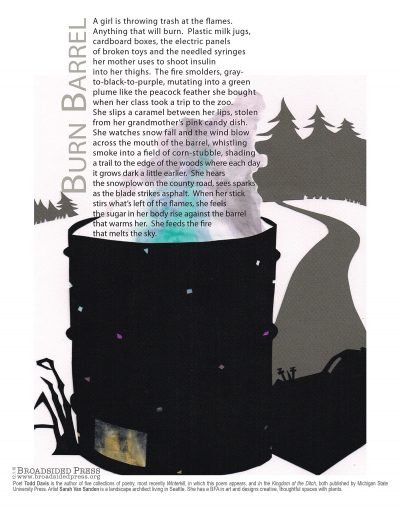 Poet Todd Davis is the author of five full-length collections of poetry—Winterkill; In the Kingdom of the Ditch; The Least of These; Some Heaven; and Ripe—as well as of a limited edition chapbook, Household of Water, Moon, and Snow: The Thoreau Poems. He edited the nonfiction collection, Fast Break to Line Break: Poets on the Art of Basketball, and co-edited Making Poems: Forty Poems with Commentary by the Poets. His poetry has been featured on the radio by Garrison Keillor on The Writer’s Almanac and by Ted Kooser in his syndicated newspaper column American Life in Poetry. The winner of the Gwendolyn Brooks Poetry Prize and the Chautauqua Editors Prize, Davis is a fellow of the Black Earth Institute and teaches environmental studies and creative writing at Pennsylvania State University’s Altoona College.

Artist Sarah Van Sanden lives in Seattle, where she takes every opportunity to relish in urban nature. She has studied visual art, botany, and design and makes her living designing and building landscapes. In her spare time she works on various creative projects with plants and plant materials.