What did you think an artist would pick up on from your poem?
Poet Lisa Gluskin Stonestreet: I expected that the images of the trains and the planets would come into play. I thought the lovers might make an appearance, but I had no idea how that might actually play out visually. Their absence is a kind of odd presence.

What inspires you in this poem?
Artist Se Thut Quon: I first saw the physical (as opposed to the artistically represented) genitalia of the opposite sex by the light of the overhead projector during 8th grade geometry. This same teacher, who by the end of the course had donned a facemask and the sign “I’m not contagious, you are,” left school, hopelessly sick. (This was the early 80s.) That initial sighting set loose a comfortable imagination that postponed emotional development and frustrated the resolve to act for many years. What I thought was so important for being real, by default soon became cherished as an image with which to play.

What surprised you about this piece, once you saw the artwork and poem together?
Artist Se Thut Quon: Seeing the completed broadside brought back the nervous stomach I had from the late nights spent making the art.

Did the visual artist refract any element of the poem that made you see the poem differently?
Poet Lisa Gluskin Stonestreet: There was something about the Escher-inspired (Escheresque?) perspective skews that made me think about how strange and unsettling the world of this poem really is. When I was writing the poem, its world didn’t seem that odd to me—a little flatter and stretchier than our own, perhaps, but very recognizable… which is where I think a lot of the humor comes from. The art brings forth the unease under the humor, the feeling that everything is sliding under our feet.

When you began what aspect did you follow?
Artist Se Thut Quon: The poem’s form suggested an incongruous visual composition of collaged parts while its mathematical framework required that the elements be distinct and well defined. The depth represented in the drawing, like the poem’s questions of space, time, and motion, remains unresolved.

What surprised you about this collaborative piece?
Poet Lisa Gluskin Stonestreet: It took me a while to see the ruled notebook paper underneath everything. That really brought the strangeness of school to the fore.

Have you ever written work that has been inspired by visual art? What was that experience like for you? Why were you inspired to do so?
Poet Lisa Gluskin Stonestreet: I’ve attempted many ekphrastic poems, but very few successfully. I don’t feel like it’s enough for a poem just to represent another work of art, even if it does so powerfully—the poem has to interact with that work and make something surprising from the encounter. For some reason, though, I often find myself writing about the experience of making art, specifically about the act of photography. I’m not, however, a photographer.

If you had to represent the broadsided of “Certain, Impossible, Likely” with one word, what would it be?
Poet Lisa Gluskin Stonestreet: Eerie.
Artist Se Thut Quon: My answer is Impossible.

Read any good books lately?
Poet Lisa Gluskin Stonestreet: In no particular order, or rather, in the order in which they’re piled next to the bookshelf: Dean Young’s Fall Higher and The Art of Recklessness. Joan Silber’s Ideas of Heaven. Mary Roach’s Packing for Mars. Brian Turner’s Here, Bullet. Zoe Ferraris’ Finding Nouf. Maira Kalman’s The Principles of Uncertainty. Brian Teare’s Pleasure. Steven Pinker’s The Stuff of Thought. William Pène du Bois’ The Twenty-One Balloons. And lots of books about Jedis (I have a five-year-old son).

Seen any good art lately?
Poet Lisa Gluskin Stonestreet: My first response to this question: God, I need to get out more. But then I thought about a piece I just keep coming back to. It’s in the Oceanic collection of the de Young Museum here in San Francisco, a wooden Polynesian house-post sculpture of a human figure. It has so much presence—sorrowful and joyous all at once.

Anything else?
Poet Lisa Gluskin Stonestreet: We send poems out into the world, and hope they affect readers in some way, though we never know exactly how or when that will happen. Broadsided makes that process tangible. 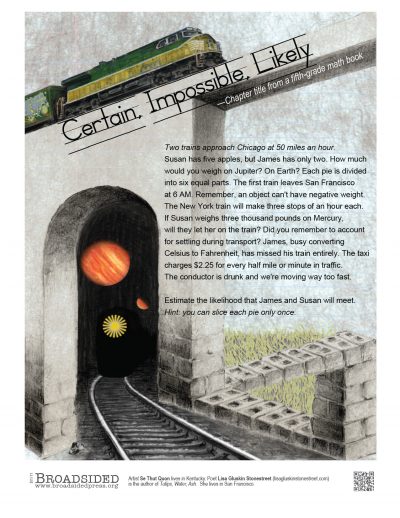 Poet Lisa Gluskin Stonestreet’s book Tulips, Water, Ash was selected for the 2009 Morse Prize and published by University Press of New England. Lisa was born in Stockton, California and has earned degrees from Yale University and the MFA Program for Writers at Warren Wilson College. After working as a technical editor, arts magazine publisher, gift wrapper, film studio gofer, and cocktail waitress, she now makes her living as a freelance editor. Her poems have been awarded a Javits fellowship and a Phelan Award, and have appeared in journals such as Quarterly West, Blackbird, The Iowa Review, 32 Poems, and Third Coast and in the anthologies Best New Poets 2005 and 2006. She lives in San Francisco with her husband and son. (www.lisagluskinstonestreet.com)