NOTE: On June 1, 2020, the day this broadside was scheduled to be published, it was a Monday after a weekend of protests in response to the killing of George Floyd, his neck under the knee of a police officer. To publish “Choke” in that moment, even though the poem had been selected for publication a year prior, even though it is engaging with other kinds of silencing, did not feel right. Not in a society in which violence and silencing against Black people have been entrenched by institutionalized racism. We continue to grieve the murders of George Floyd, Breonna Taylor, Tony McDade, Ahmaud Arbery, Nina Pop and too many others. We are being shown, again and again the damage and danger of silence about racism toward Black people. So we delayed and took time to ask the artist and author if they had thoughts about their broadside in this current moment — or art in general, at this moment.  Here are their replies:

This poem and this art were created quite some time ago.  Do you see them differently today?  How and why?

Poet Katherine Fallon: In looking back over this poem in the midst of the Black Lives Matter protests, I am struck by the title, of course, which feels both timely and entirely inappropriate. I intended to meditate on silencing, particularly through the lens of femininity and queerness, but that silencing takes on a new meaning in this context, becoming broader and linked directly to physical violence. It is necessary to believe in commonality and it is naïve to believe in universality. While the original impetus of my poem seems universal in my own communities, it is certainly not a universal experience to feel controlled in the face of subjugation. This is precisely because some oppressors experience no marginalization themselves and suffer no repercussions for their violence (and for those who are marginalized and perpetuate marginalization: do better). Thanks to the bravery of so many, that tide appears to be changing. I hope that as a result of this civil uprising, at least some of our elected officials will finally act to protect their citizens instead of those who impose law and order through violence and systemic oppression.

Artist Millian Pham Lien Giang: As an artist, I work to make visible the effects of oppressive structures on the body through my art. This theme leads me to use signifiers rooted in cultural, social, and individual history as a layered intersectional experience. Square Not: Durian Flowers and Dragon Fruits, the art for this broadside, is a composition about the harsh reality of being a cycle breaker in the face of outmoded tradition and structures. The knot in the composition is not a true knot, and is used to signify the hope for eventual escape and liberation of the next generation. Even though this recent visual collaboration with Katherine Fallon’s poem entitled “Choke” was completed months before the recent demonstrations from injustice and systemic racism, the use of ropes, knots, and the body are common signifiers in the United States’ history of slavery and are tied to racial strife. This parallel is an indication of the larger problem of systemic racism where all lives won’t matter until black lives matter.

What made you think of Broadsided for this poem?
Poet Katherine Fallon: Elizabeth Bradfield came to my university last year to read and to work with students on creating broadsides. After the workshop, we plastered a wall with Broadsided creations, and that wall happens to be outside of my office door. Before then, I thought broadsides were like indoor voices and never quite knew what to do with them, but seeing the collaboration and grit behind these, understanding their intention as public art, changed my perspective. I started to think of what I had that would fit into the tradition of that wall. I started to think of what I had that could shout a bit.

What inspires you in this poem? What drew you to it?
Artist Millian Pham Lien Giang: The details make the narrative seem at once very general yet very specific.

Describe your dream “Vectorization”—where, in your wildest dreams, would you most like to see this broadside posted in the world?
Poet Katherine Fallon: Inside a bathroom stall at the Mutter Museum in Philadelphia. I would say beside the wall of skulls, but that is, of course, verboten.
Artist Millian Pham Lien Giang: I would love a giant poster of this in people’s rooms and personal spaces.

What did you think an artist would pick up on from your poem? Did the visual artist refract any element of the poem that made you see the poem differently?
Poet Katherine Fallon: There is a roundness to the artwork that softens the poem. Its shape suggests a noose to me, and being tongue-tied, and the bind in reference to the bird. Its proportion and botanics add to that an ouroboros-style nod toward the feminine condition of being stuck. Those things are hinted at in my work, but not as powerfully as Millian’s piece conveys them.

Did anything shift for you or come into new light once you saw the poem and art together on the page?
Artist Millian Pham Lien Giang: It took me a couple months to figure out the composition for this poem. It was mainly due to the super specific details yet general nature of the narrative. I didn’t want the art to simply be an illustration of the text nor stray too far from the general idea in the poem.

One of the things I learned from collaborating with other artists and professionals in other disciplines is that it’s hard to make sure collaborators/contributors retain their mark—each of their identity in the final form. How could I ensure that the art doesn’t overwhelm the poem and the poem doesn’t explain away the art? How can both works complement each other in a symbiotic relationship rather than an awkward pairing? It’s a very delicate partnership. My unease with the pairing was quelled in this final form, in which both works function well with parallel narratives rather than competing with each other.

Have you ever written work that has been inspired by visual art? What was that experience like for you? Why were you inspired to do so?
Poet Katherine Fallon: Absolutely. I was let loose inside of the Philadelphia Museum of Art in college for an ekphrastic exercise, and I have never stopped thinking about it (Duchamps’ Étant Donnés is an ekphrastic goal/enigma for me; maybe I will never get there). Last summer, my poem “Kenai,” written in response to Nikki Zarate’s “Blue Whale,” was the Editor’s Choice for Rattle‘s Ekphrastic Challenge. But I have never had someone make something in response to my work, and it feels pretty special.

If this broadside were a type of weather, what would it be?
Poet Katherine Fallon: Perfect. Festival weather. Which is positively infuriating.
Artist Millian Pham Lien Giang: A summer thunderstorm in the desert before a great flowering.

Read any good books lately?
Poet Katherine Fallon: I recently reread Anne Carson’s The Beauty of the Husband and Maggie Nelson’s Bluets, but I’ve also discovered Scott Chalupa’s Quarantine, which feels timely, and, speaking of ekphrasis, Julie Bloemeke’s Slide to Unlock, which just hurts. I have also been wrangling with Bhanu Kapil’s Ban en Banlieue, which is how I have experienced all of her collections. It is always worth the cognitive acrobatics.
Artist Millian Pham Lien Giang: I’m slowly working through Mark Johnson’s The Meaning of the Body. It’s validating a lot of what we do as creatives—that tapping into sense perception and conveying the feeling dimension of human experience is just as important to our existence as using objectivist thinking to logically make sense of our lives.

Seen any good art lately?
Poet Katherine Fallon: I am positively delighted by the pandemic social media challenge wherein museums are asking people to take photographs of themselves in imitation of famous works of art, using only what they can find within their homes. The Brueghel pieces are my favorite. Beyond that delightful distraction, I always come back to Angela Deane, Beth Cavener Stichter, and Petah Coyne.
Artist Millian Pham Lien Giang: There are so many virtual exhibitions lately and my Instagram feed is full of great art. Somehow I don’t equate this to a regular art-viewing experience. I need to view art in person, to see the texture of the medium, the relationship of the body in space, the relationship of the body to the art, and the art in space. What I get from virtual exhibitions is mainly the idea of an image because everything physical about it has been mediated through the screen. Instead of letting my art soul become fallow, I’ve been feeding it lots of documentaries of artists listed on Kanopy and YouTube. It’s invigorating to see artists such as Agnes Martin, Vija Celmins, and Helen Frankenthaler approach art making many decades ago.

Anything else? (Here, we invite the collaborators to invent a question, add a comment, or otherwise speak to what the questions so far have not tapped about their Broadsided experience).
Artist Millian Pham Lien Giang: This work is jumpstarting a new collage series with knots, fruits, and the body temporarily called “All Knotted Up.” I’m still working on the other bodies of work, so it will be a very busy summer. 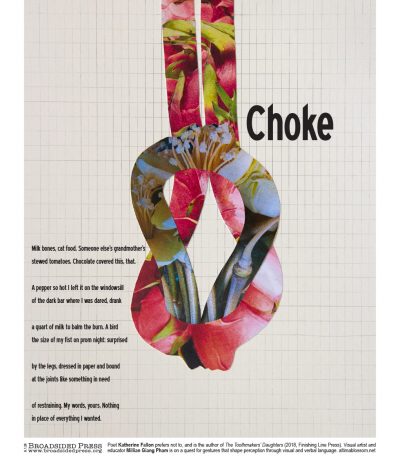 Millian Pham Lien Giang is a visual artist and educator. When she’s not preaching and teaching the finer points of fine art, Pham focuses on many modes of visual art perception in her practice. Overlapping themes of gender, class, and culture are captured through images, objects, and events in her work. altimablossom.net
Image: Square Not: Durian Flowers and Dragon Fruits, 2020, Mixed Media Collage, 15 x 11 inch

Poet Katherine Fallon received her MFA from Sarah Lawrence College and is the author of The Toothmakers’ Daughters (Finishing Line Press). Her poems have appeared in AGNI, Colorado Review, Juked, Meridian, Best New Poets 2019, and elsewhere. She teaches in the Department of Writing & Linguistics at Georgia Southern University, and shares domestic square footage with two cats and her favorite human, who helps her zip her dresses.