What inspired you to “dibs” this poem?
Artist Jim Benning: The idea of a search, movement. All the things/places and associations that come to mind when one’s awareness of seeing is attended to. It’s a process I try to assess each time I make images; what have I seen, what am I looking for, does what I see have meaning to what I feel and want to say.

Did the visual artist refract any element of the poem that made you see the poem differently?
Poet Jason Fraley:  I had not imagined the tunnel aspect of this poem so clearly. Jim did a fantastic job of replicating a tunnel that looks very much like the tunnels plowing through West Virginia’s mountains. The idea of this scene taking place in a darkened world until the very end, until the burning house is approached, gives the poem a different aura or atmosphere than what I had otherwise envisioned.

In what sense did the poem first present itself as a collaboration with a visual medium? Did it come to you first as image? As an idea? Music? Narrative?
Artist Jim Benning: Mostly as an idea, though the concept of movement, a change of space, could be presented in a narrative image.

If the poem were a weather pattern, what would it be?
Poet Jason Fraley:  A clipper front—the warm winds preceding the front are just a tease for the cold and biting wind that follows. I grew up wanting to be a meteorologist, so this is the perfect question.
Artist Jim Benning: A storm on the horizon. A sign that things are going to change; there is an uncertainness, a foreboding of what’s to come.

If the broadside collaboration were a land formation, what would it be?
Poet Jason Fraley:  An iceberg surrounded by warm water.
Artist Jim Benning: A ocean beach, both sides effecting and defining each other.

What did you think an artist would pick up on from your poem?
Poet Jason Fraley:  Honestly, I had no expectations going into this collaboration insofar as what I expected the artist to portray. Projecting my visual demands in any way would have made this much more difficult. I’m always surprised at what other people take away from my writing. That’s one reason I very much try to establish a dream-like or surreal atmosphere when I write. Yes, I am trying to say something but not in a conventional way.

What surprised you about this collaborative piece?
Poet Jason Fraley:  This collaboration came together much more easily and successfully than I imagined. Jim picked up on the isolation/self-examination ideas littered throughout and portrayed them in a way that thrills the existential part of my soul senseless.
Artist Jim Benning: Once I decided to work with the poem I set the project aside for a couple of weeks. What became interesting and I recognized later when I started to actually work on the project is the large number of images that came to me during that time. From highly abstract to still life images, I feel it speaks to the strength of the words to inspire so many different ideas. Eventually I wanted a person in the image and made the photo you see here.

Read any good books lately?
Poet Jason Fraley:  A Thousand Years of Nonlinear History by Manuel De Landa and Mao II by Don DeLillo are both excellent. I haven’t bought any (chap)books of poetry in a while, just journals. I intend to address this issue soon.
Artist Jim Benning: My wife Karen read A Dirty Job by Christopher Moore and recommended it thinking I would like the story. This author has a sharp sense of wit and uses it well in a story of a man’s misadventure as he finds out he’s been given the role of the Grim Reaper and represents death. Great fun.

Seen any good art exhibits lately?
Poet Jason Fraley:  Unfortunately, no. The latest issue of Fence does have some spiffy artwork, though.

If your poem were a Pez, what type/flavor would it be?
Poet Jason Fraley:  It would be a grape Pez that had been dropped on the floor and subsequently eaten, all the while adhering to the five second rule.

Anything else?
Poet Jason Fraley:  This is probably one of the most enjoyable and unique poetry projects in which I’ve had the opportunity to participate. It’s good to see this form alive and kicking. 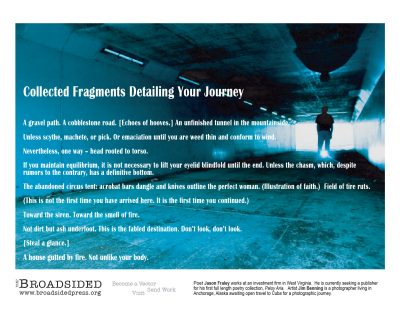 Poet Jason Fraley works at an investment firm in West Virginia. He is currently seeking a publisher for his first full length collection, Palsy Aria. His work has appeared or is forthcoming in Forklift Ohio, 42opus, The Hat, Pebble Lake Review, Caketrain, and No Tell Motel.

Artist Jim Benning is a photographer/designer living in Anchorage, Alaska, using images to show how he sees things, places, and people that ignite his curiosity. He says: “As a member of the board for the Alaska Photographic Center I work to bring photographers to Alaska to share their photographic vision and inspiration with the local community.”