What is it like to see both visual responses to the poem?
Translator Keith Ekiss: This is “visual Odio.” The lines and colors flow and don’t appear to have any point of origin or termination, they curl and drift like smoke or blood. The visual arts were important to Odio and she wrote with great insight and verve on artists she admired like Leonora Carrington and Remedios Varo. My first thought on seeing the images was: “Odio would’ve loved this.”

Does reading the poem in English versus Spanish provoke different feelings in you?
Artist Jennifer Moses: Oddly enough the poem in English translation evoked an abstract response conversely the Spanish translation seemed suited for a figurative narrative approach. It seems counter intuitive but that is what came out of the match of drawing to poem…
Translator Keith Ekiss: Maybe I’m romanticizing the original Spanish, but Odio’s poem seems more mysterious, more secretive than my translation. This is a shy poem. There’s something the poem wants to reveal, only just barely. The angels seem more real, more possible in her poem and less of a symbol. The English sounds more bold, though hopefully still musical. The two versions meet in the end with their enigmatic declarations.

Do you see an overlap between the act of translation and the act of responding visually to a piece of literature?
Artist Jennifer Moses: Yes, I think trying to approximate a sensation or image in relation to language is similar to a translation. I may be wrong but my assumption is that a good translation doesn’t necessarily go word for word but word for sensation for word much like how an artist would translate language into image—there is a gap between the poem in native language where image and translation reside.
Translator Keith Ekiss: If you change a word or a line of a poem, you no longer have that original poem, you’ve created something new. To take a poem into a completely new language means you’re not just translating, your re-envisioning. Translation is always a balancing act. You’re tasked with creating a new poem that must work in English but must be faithful in as many ways as possible to the original in terms of intent, sensibility, image, sentence, tone, and other formal elements. A visual translation would seem to allow for a greater latitude of artistic response, to embody how the poem would move if it were paint.

Why Eunice Odio? How does translation fit into your creative life?
Translator Keith Ekiss: Around 15 years ago, I visited Costa Rica and fell in the love with the country. When I returned, I wanted to learn more about its literature. I came across four translations of Odio by Martha Collins in an anthology. Eventually, I contacted Collins to see if she was translating a whole book. She wasn’t, so I decided to pursue the project myself. I enjoy working with Odio’s poems slowly to find out how they might exist in English. Odio’s aesthetic—her whole artistic temperament—is very different than mine. I can’t say that she’s influenced my writing, though after more than a decade of translating her poetry I can summon Odio on occasion. Translation is an opportunity to bring over into English new voices, new approaches, new spirits. Translations that move too easily into a new language are less exciting to me, they have less to offer, and only confirm our own cultural sense of poetic identity. Odio resists translation. Simply put: she doesn’t always sound good in American English because she didn’t write, wouldn’t have thought to write, with a North American sensibility. This resistance and difficulty keeps me returning to her work and to the art of translation.

Why this poem?
Artist Jennifer Moses: The last line “full of spirit and smoke,” a most beautiful ending. 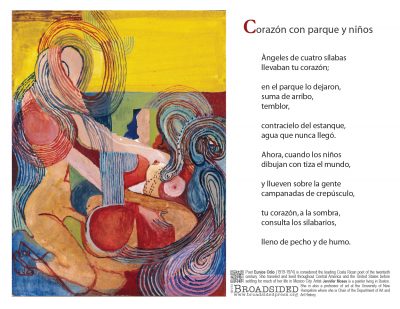 Poet Eunice Odio (1919-1974) is considered the leading Costa Rican poet of the twentieth century. She traveled and lived throughout Central America and the United States before settling for much of her life in Mexico City. Her principal works include Los elementos terrestres (Earthly Elements, 1948), Zona en territorio del alba (Zone in the Territory of Dawn, 1953), El tránsito de fuego (The Fire’s Journey, 1957), and Territorio del alba y otros poemas(Territory of Dawn and Other Poems, 1974). In addition to her poetry, she was the author of short stories and numerous political and cultural essays. Her complete works were published by the University of Costa Rica in 1996.

Translator Keith Ekiss is a former Wallace Stegner fellow and Jones Lecturer in Poetry at Stanford University and the author of Pima Road Notebook (New Issues Poetry & Prose, 2010) and the translator of The Fire’s Journey (Tavern Books, 2013) by Eunice Odio. The past recipient of scholarships and residencies from the Bread Loaf and Squaw Valley Writers’ Conferences, Millay Colony for the Arts, and the Petrified Forest National Park, he received the Witter Bynner Translators Residency from the Santa Fe Art Institute for his work on Eunice Odio.

Artist Jennifer Moses is a painter living in Boston. She is also a professor of art at the University of New Hampshire where she is Chair of the Department of Art and Art History. She was educated at Bennington College, Tyler School of Art, Indiana University and Skowhegan School of Painting and Sculpture. She has exhibited her work throughout New England, and is a member of the Kingston Gallery in Boston. She is one of the 2010-2011 recipients of a yearlong residency at the Roswell Artist Residency Program in Roswell New Mexico, and a resident at Yaddo in May/June 2012. More at www.jennifermosespainting.com