What did you think an artist would pick up on from your poem?
Poet Jane Hirshfield: The goat. But this is better. I love the foregrounding of the water/stone idea.

What inspires you in this poem?
Artist Gabriel Travis: I am really interested in the relationship between “rational thought” and intuition—different ways of knowing and which ones we trust. I love how this poem embodies that tension, in that it is in dialogue with the western philosophical tradition and yet is imagistic, non-linear and lyrical.

Did the visual artist refract any element of the poem that made you see the poem differently?
Poet Jane Hirshfield: Yes. This image brings forward the poignancy of our relationship to reason, our loneliness within its imprisonments of spirit and heart. Those outstretched arms…

What surprised you about this piece, once you saw the artwork and poem together?
Artist Gabriel Travis: The murky darkness of the visual piece really emphasizes the darkness in the poem. I find myself focusing more on words like “unnamed ancient,” “sleepwalk,” “barbed wire,” “Auschwitz,” “darkness,” “strange eyes.” Maybe that isn’t really a surprise though, because the poem felt spooky to me from the start.

The poem reads a bit like a collage—a series of disparate images that create new meaning when they are combined. And the way the layout is done with the cutout ransom-note style text is a great connecting thread between the poem and the visual art. That three-way collaboration is such a nice surprise.

What surprised you about this collaborative piece?
Poet Jane Hirshfield: That I could have so little imagined where an artist would go with the poem. It was quite beyond me to guess how this might turn out. I love that an image from the poem is indeed the “subject” of the artwork, but I love even more the way something has been added that makes this visual embodiment so very un-literal. The poem is not “illustrated” here, it’s reinvented.

I also love the way the printing of the poem’s individual lines evokes the trope of a ransom note made from cut-out magazine or newspaper letters—but subtly, in a way that doesn’t interrupt the flow of reading. We are indeed kidnapped when we live only in “pure reason.”

When you began this piece, was it color, shape, or some other aspect that you followed?
Artist Gabriel Travis: I started with the goat. I made a cut-paper billy-goat as a point of entry, I assume partly because a lot of what I do these days is make painterly animals out of cut paper. I wasn’t sure that I wanted to focus on the goat in the visual response, and my focus did shift to other things— the perimeter concept, the dark unknown, and the “water around a stone” image. I kept searching for a way to incorporate the goat into the piece but it never worked. In the end I guess I needed him to simply “stand patient, watching without judgment” from the sidelines. He is still on my desk.

Have you ever written work that has been inspired by visual art? What was that experience like for you? Why were you inspired to do so?
Poet Jane Hirshfield: One poem that had in mind a painting by Bonnard, “Almond in Blossom,” comes to mind. The painting is not the direct subject, only an element. I love the image, its energies and angularities and outbursting life. I also find tremendously moving a story that I learned only after the poem was published—that on his death-bed, Bonnard (who never stopped revising his paintings) summoned his nephew and asked him to add some yellow-gold on one low corner of the painting—obliterating the artist’s signature. My poem—”History as the Painter Bonnard,” in the book The October Palace (NY: HarperCollins, 1994)—was about the Velvet Revolutions of 1989. I could not think about how to think about what was happening during that time with any real subtlety or depth, I only knew that my first response was too simple. Then, I thought of Bonnard, his ceaseless revision of his paintings that gave rise to the artists’ term “bonnarding,” and also the way that a “revised” oil painting, after enough time, shows the ghost-shape of its original version. That idea of revision and palimpsest gave me an entrance—not just to the poem, but to how I felt about history’s own revisions.

This is how I think most fundamentally perhaps, as a poet, as a person—by rinsing one situation in the photographic developing fluid (what an old fashioned analogy that has so quickly become) of another.

If you had to represent the Broadsided of “Critique of Pure Reason” with one word, what would it be?
Poet Jane Hirshfield: I waver. “Breakthrough”? “Grief”? I could settle on “hard-struck.” I look at this image and I hear the rush of its waters, the silence of its humans.
Artist Gabriel Travis: Perimeter

Seen any good art lately?
Poet Jane Hirshfield: The show “Japonesque” at San Francisco’s Palace of the Legion of Honor. It had more great Japanese ukiyo-e prints in the room than I’ve ever seen before in one place. It was a lesson in looking from many perspectives and angles, as well as in beauty of form that has been slightly abstracted.

Anything else?
Poet Jane Hirshfield: Yes—that I am thrilled by the samizdat nature of the distribution my poem will have through this project. That it is outside the commercial world, offered by only the passion and generosity of the Broadsiding “vectors,” received by only the accidental openness and curiosity of passersby—this is fantastic, and moving, to me. Thank you.
Artist Gabriel Travis: I am a really big fan of Jane Hirshfield’s poetry. I have memorized only a couple poems in my life, and one of them is hers (“Nothing Lasts,” from Given Sugar, Given Salt). So I was pretty thrilled to have a chance to respond to her work.

Note: Below is the goat Gabe first created…. 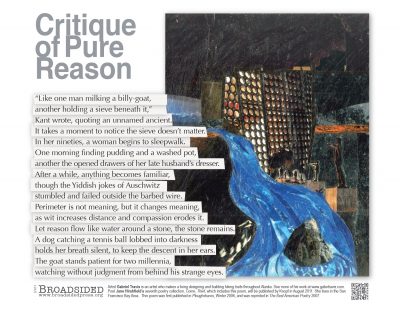 Poet Jane Hirshfield’s seventh poetry collection, Come, Thief, which includes this poem, will be published by Knopf in August 2011. Her six previous collections include After, named a “best book of 2006” by The Washington Post, San Francisco Chrnoicle, and England’s Financial Times, and Given Sugar, Given Salt(2001), a finalist for the National Book Critics Circle Award. Other honors include the California Book Award in Poetry, the Poetry Center Book Award, and fellowships from the Guggenheim and Rockefeller foundations, the NEA, and the Academy of American Poets. Hirshfield lives in the San Francisco Bay Area.

Artist Gabriel Travis is an artist who makes a living designing and building hiking trails throughout Alaska. He has been making art on commission for about eight years and producing fine art notecards featuring these works (available at www.gabetravis.com). In February 2009, Gabe spent a month in residence at the Vermont Studio Center working with mixed-media and paint and breathing new life into his studio practice.