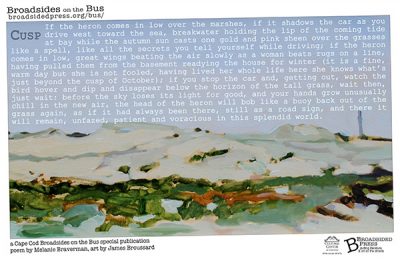 James Broussard: An artist living in Provincetown, Jim Broussard paints en plein air. His work can be seen at Chach (73 Shankpainter Rd.). Raised in Montvale, New Jersey, Jim has been painting for more than thirty years. Of his work he says: “Walks through the dunes of the National Seashore or Cape Cod’s seaside neighborhoods are my inspiration. To evoke a feeling or make a connection through my work is less an exercise in intellect than an experience which invites the viewer to pause.”

Poet Melanie Braverman is the author a novel, East Justice, and the poetry collection Red, winner of the Publishers Triangle Audre Lorde Poetry Award. Her writing has appeared in The New York Times Sunday Magazine, Poetry, American Poetry Review, and other journals; visual work is currently in exhibitions at the Leslie+Lohman Museum in New York and the Provincetown Art Association and Museum.