What did you think an artist would pick up on from your poem?
Poet Dan Rosenberg: I had hoped that Ira would run with the pervasiveness of the body, and the gestures toward duality (Cartesian and otherwise) in the poem—and he has exceeded my hopes! I love the human forms, and the anatomical feel of the landscape—as if we’re inside a beautiful and dangerous stomach. The poem arose from the fact that the word “body” kept appearing in my poems; it was my attempt to exorcise that word from my poetic vocabulary. (It failed.) I think something of the obsessiveness and interpermeability that drove the poem also appears in Ira’s work.

What inspires you in this poem?
Artist Ira Joel Haber: For the last few years I’ve been working on collages with body and anatomy elements in them. When I read the poem, I jumped at it because of the title Dear Body, which could be read as a letter to the body or as an endearment for the body. I thought this is a perfect poem for my recent work.

Did the visual artist refract any element of the poem that made you see the poem differently?
Poet Dan Rosenberg: To my eye, the main figure seems to be either bathing or drowning. I love and am surprised by this new articulation of the tension between the two, between basking in the bodily and suffocating in it.

What surprised you about this piece, once you saw the artwork and poem together?
Artist Ira Joel Haber: I can’t say that I was surprised, but I was curious about which collage Liz [Broadsided’s editor] would pick, and I think you picked a good one, and I think the broadside looks real nice and I hope that the poet is pleased with the result.

What surprised you about this collaborative piece?
Poet Dan Rosenberg: I think I’m falling in love with the shimmery figure—which I’m thinking of as a “ghost of a body”—floating on the top. I’m also thrilled by how literally Ira chose to take the word “body”—how he is showing the stuff, the gunk, of the human form, particularly since “body” tends to operate more abstractly in the poem.

When you began this piece, was it color, shape, or some other aspect that you followed? Did that change?
Artist Ira Joel Haber: Well as you might know for my broadside work that I have done, I always take an existing piece and play around with them on photoshop, so the original collage is somewhat different than what I submitted. That’s the beauty of photoshop it allows me to literally create a new piece while still having the originals which I also like a lot.

Have you ever written work that has been inspired by visual art? What was that experience like for you? Why were you inspired to do so?
Poet Dan Rosenberg: I have tried ekphrasis a few times, almost always with terrible results. There are so many more avenues of obligation, and the ontological status of the work falls into question: Am I creating an independent poem, or text meant to be read while looking at the visual art? This is part of what I love about Broadsided, though; we get to see one artist run with another’s work and create something that is both its own thing and part of something greater. I keep trying my hand at ekphrasis, though, because visual art often operates on me similarly to how poems do, on a level that precedes—slightly—self-consciousness. I find myself wanting to harness that energy, and perpetuate it.

If you had to represent the Broadsided of “Dear Body” with one word, what would it be?
Poet Dan Rosenberg: Unbloodied
Artist Ira Joel Haber: Bodacious

Read any good books lately?
Poet Dan Rosenberg: Oh yes. Frankenstein is even better than I’d remembered. Kiki Petrosino’s Fort Red Border is a delight. Graham Foust’s Leave the Room to Itself and Jon Woodward’s Rain both gave me that tight feeling of jealous admiration. I finally got around to Seamus Heaney’s translation of Beowulf. Latest acquisition: Bartlett’s Familiar Quotations.
Artist Ira Joel Haber: For Christmas a friend gave me a copy of I heard God Laughing, poems by Hafiz, and I read them on the subway.

Seen any good art lately?
Poet Dan Rosenberg: Some good friends have created wonderful work recently—Isaac Sullivan and Kasia Ozga. The Dali museum in Figueres was perhaps the most pleasurable museum I’ve ever visited. And of course, the public art of Iowa City, where I live, is a blast—particularly when the statues inherit accessories from drunken U. Iowa undergrads.
Artist Ira Joel Haber: Well the Bauhaus and Kandinsky shows at the MoMA and the Guggenheim were both superb. There is so much to see in New York that I usually wind up not seeing all that I want to. I also teach art to seniors and to retired school teachers and let me tell you that a lot of the work that they make is as good as anything being shown in many of the galleries. No kidding.

Anything else?
Poet Dan Rosenberg: The best part of being a Vector has been watching people look at the broadsides—it’s heartening to see folks stop to check them out in libraries and coffee shops. (I’m nervous about watching people look at this one, though.) Thank you, Liz and the gang, for including me, and thank you, Ira, for your wonderful work!
Artist Ira Joel Haber: I always enjoy doing these broadsides and I’m in awe of the fine work that you do, and I’m delighted that I’ve been able to contribute to broadsided and I hope to do more in the future. 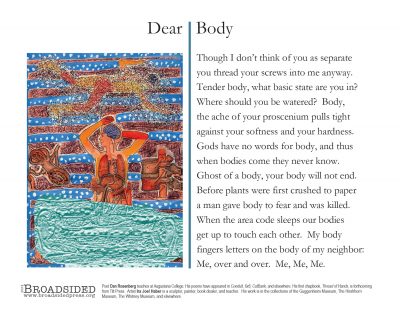 Poet Dan Rosenberg teaches at Augustana College. His poems have appeared in Conduit, CutBank, 6X6, and elsewhere. His first chapbook, A Thread of Hands, is forthcoming from Tilt Press. This poem was an attempt to exorcise the word “body,” which kept cropping up, from his poems. It failed.

Artist Ira Joel Haber is a sculptor, painter, book dealer and teacher who sometimes writes poetry and movie reviews. His work has been seen in numerous solo and group shows both in USA and Europe. His work is in the collections of New York University, The Guggenheim Museum, The Whitney Museum, The Hirshhorn Museum & The Albright-Knox Art Gallery. In 2004 he received The Adolph Gottlieb Foundation grant. Currently he teaches art at the United Federation of Teachers Retiree Program in Brooklyn.