What did you think an artist would pick up on from your poem?
Writer Dolan Morgan: I have no idea what anyone is thinking, nor do I have any reliable gauge for predicting behavior. Frankly, I am always shocked at what happens next, moment to moment, the fact of which also continues to surprise me. My most common response to anything, both mundane and out of the ordinary, is: Oh god, what the hell is happening here? That said, I have an entirely unfounded theory that people generally love power-lines, a theory which is constantly proven and then disproven in rapid succession, such that I would confidently both predict and not predict that an artist might focus on them. Looks like I was right, in this case at least, since one of those things happened, I think.

What inspires you in this piece?
Artist Sarah Van Sanden: Since fire in this poem reads as both a creative and a destructive force, I was really conflicted about how to represent it, but it has a huge presence that I couldn’t avoid.

Did the visual artist refract any element of the poem that made you see the poem differently?
Writer Dolan Morgan: I didn’t realize until seeing Sarah’s (great!) work that I have always thought about this piece in dark, almost monochromatic images, with bursts of fire peppered in at a few key moments that often catch me off guard. The light and colorful approach here brings out more of the youth of the characters than was present in my brain’s terrible rendition. Also, there’s this giant matchstick here in the picture, which legitimately scares me. Who is going to pick that thing up and when?

When you began this piece, was it color, shape, or some other aspect that you followed? Did that change? What surprised you when you saw the poem and art together?
Artist Sarah Van Sanden: I’m really attuned to spatial descriptions, so the cityscape immediately came alive in my mind while reading this poem. That was the obvious way in for me. But the poem has so much complexity, and I agonized about how to represent it. I guess I had to give up trying to represent it. Upon seeing the two together, the combination of text and image strikes me as surprisingly free of complexity, but I think it works.

What surprised you about this collaborative piece?
Writer Dolan Morgan: Literally everything. I have no idea what’s happening in life.

Have you ever used writing or other art to inspire your work outside of Broadsided?
Artist Sarah Van Sanden: All the time. I always start an art or design process with words of intent and I frequently rely on others’ written ideas to jump-start my own imagery.

Have you ever written work that has been inspired by visual art? What was that experience like for you? Why were you inspired to do so?
Writer Dolan Morgan: I was recently prompted to write from a photograph by Traci Matlock for the Manuel Gonzales project, “A Thousand Words.” The picture is of a naked woman on the floor with some glass on top of her body. I wrote a story about furniture. I am also frightened by furniture and most objects.

If you had to represent the Broadsided collaboration with one word, what would it be?
Writer Dolan Morgan: Terrifying (and by this I don’t mean that the collaboration was or is terrifying, but that it would be terrifying if, for some unforeseen reason, I truly had to represent this collaboration with one word, the consequences of my failure to do so being who knows what, pain or suffering or death. At that point I would be terrified, and in fact I am terrified now without it even being the case, because I have this image of a giant man finally snatching up that enormous cartoon matchstick and holding it to my body, or my bare bottom, an image I’ve recalled from a children’s book about gnomes wherein a troll tortures a half-naked man in a pointed hat, and that this giant with the matchstick will demand this word from me, this one word to define my collaboration, and I can see myself clearly trembling there, hanging in the air and on fire, mouthing “Delightful” through the smoke.)
Artist Sarah Van Sanden: Fabulodifficult

If “Dhanaivi at 16 in the South Bronx” were a piece of music, what would it be?
Writer Dolan Morgan: One of those ringtones no one ever uses, and which probably isn’t even there.

Read any good books lately?
Writer Dolan Morgan: Highly recommend: Bartelby and Co. by Enrique Vila-Matas, Leaving The Atocha Station by Ben Lerner, Ghosts by Cesar Aira, and Your Face Tomorrow by Javier Marias.
Artist Sarah Van Sanden: Alison Bechdel’s Are You My Mother? I’m fascinated by the ability to transform deeply personal experience into something that someone else would find interesting, much less amazing. AND she incorporates theory to humorous effect!

Seen any good art lately?
Writer Dolan Morgan: At Bushwick Open Studios this year, there was this wonderful art installation: a piano sits in a room accompanied by a video projection on the wall. When you play the piano, which you are welcomed and encouraged to do, video footage of New York city being destroyed is displayed on the projection, all clips taken from movies. My favorite such clip is when the Statue of Liberty just flies away like a rocket, no reason whatsoever. It’s great, like someone invisible and large grabbing up that horrible matchstick.
Artist Sarah Van Sanden: I’ve only recently discovered Zander Olson’s “Tree, Line” series where he registers topography from a certain perspective by “wrapping” tree trunks. 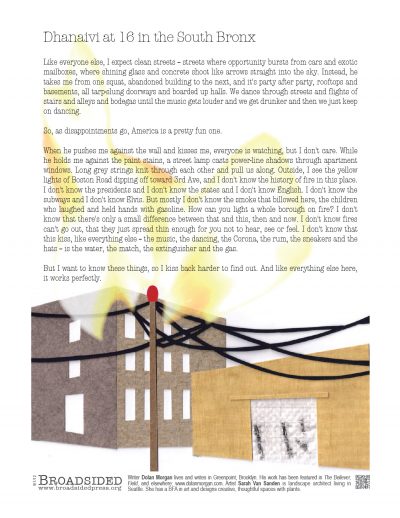 Writer Dolan Morgan lives and writes in Greenpoint, Brooklyn. His work has been featured in The Believer, The Lifted Brow, Field, TRNSFR, apt, Cricket Online Review, Fortnight and numerous other journals, both online and in print. He is a member of the writers collective, 1441, and is currently cataloging every airplane hijacking in history. www.dolanmorgan.com

Artist Sarah Van Sanden lives in Seattle, where she takes every opportunity to relish in urban nature. She has studied visual art, botany and design and makes her living designing and building landscapes. In her spare time she works on various creative projects with plants and plant materials.