Why did this piece of art resonate for you or seem like it would give you an avenue into writing about the Syrian Refugee Crisis?
Writer Nick Almeida: Just after I saw Ira Joel Haber’s drawing, I read Nicholas Schmidle’s report on a young law student who fled Syria in The New Yorker. Between Haber’s drawing and Schmidle’s essay, I noticed a cohesion of themes. Taking in those pieces, one becomes aware that human desire doesn’t change much from place to place and situation to situation, and that the intricacies of an identity don’t always inform a person’s needs. It’s the human body and spirit that does the informing.

The figures in Haber’s drawing are asking for nothing, and I was stricken by their silence in front of a blazing backdrop. Some hold the notion that a refugee is an intruder and a burden, which is an ideological problem for the world, but a logistical problem for people who need to relocate because of violence. Some refugees can’t afford to seem like burdens to their safe-keepers, or else they might not be kept at all. These two ideas collided—that oppressors and victims have the same human needs; that the anxiety of burdening others is often a survival tactic—and brought about my little story.

What do you think is the role of art in regards to real-world, real-time events? In other words, what makes a “successful” occasional or political piece of writing or art?
Writer Nick Almeida: Whether an artist likes it or not, their work is politically contextualized. What makes successful political art, I can’t say. But direct engagement is brave and, from an artist’s perspective, less likely to create accidental or unintended political wrongdoing. It might feel nice to pretend one’s work is in a political vacuum and in conversation with nothing else, but that kind of isolationism is a destructive force in life and art. 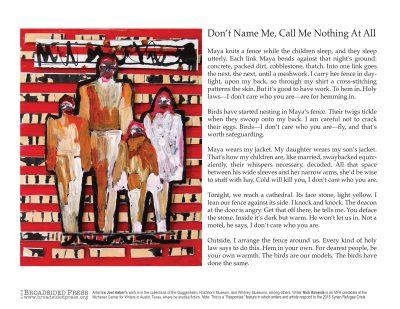 Artist Ira Joel Haber’s work has been seen in numerous group shows both in USA and Europe. His work is in the collections of New York University, The Guggenheim Museum, The Whitney Museum, The Hirshhorn Museum & The Albright-Knox Art Gallery.

Writer Nick Almeida is an MFA candidate at the James A. Michener Center for Writers at the University of Texas, where he studies fiction. His work can be read in Storm Cellar Quarterly and Yemassee Journal. He is the fiction editor for Bat City Review.